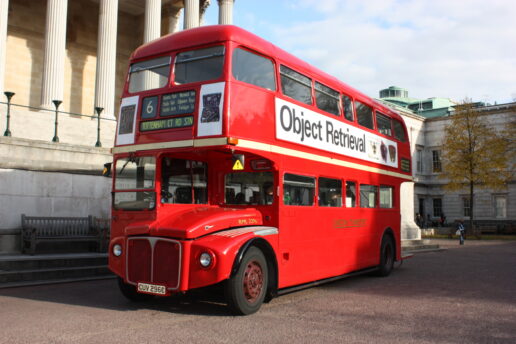 '...an eclectic success. ...a big biography of this tiny piece of history.'

Object Retrieval was shortlisted for a 2010 Museum & Heritage Award for Excellence.

Object Retrieval was a mass participation art project that took place from 15-21 October 2009 on a converted Routemaster bus in the main UCL (University College London) Quad on Gower Street, London. A single object from the UCL Pathology Collection was exhibited on the bus and explored by thousands of people from their own personal or professional perspective for 7 days, 24 hours a day. The response was extraordinary. Contributions ranged from the hyper-scientific to childhood memories via the Gospels, Jack Kerouac, Psychoanalysis and pretty much everything in between.

Object Retrieval had a simple premise: to uncover as much information as possible about one object from UCL’s Museums & Collections in the space of 7 days.

By inviting as many experts from as many subjects as we could muster as well as members of the general public to explore the object, we hoped to amass a huge, potentially limitless biography of the object. Contributions included scientific analyses of the object, personal anecdotes, drawings, anthropological accounts and many more types of information.

The selected object was a toy car that was central to a case of ‘lead poisoning in a child’ from 1963. The object was kept as a teaching aid by Great Ormond Street Hospital and is now part of the UCL Pathology Collection based at the Royal Free Hospital. In a sense it is not important what the object was, as we are confident that any object put under close scrutiny for a week would accrue a large and fascinating biography.

A project by Joshua Sofaer, curated by Simon Gould
In association with UCL Museum & Collections