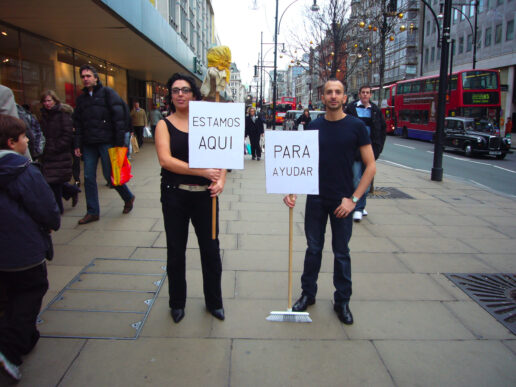 Joshua Sofaer and Ana Laura López de la Torre, in collaboration with 12 young local artists and the participation of the citizens of Madrid.

We were invited to create a new work for In-Presentable Festival in La Casa Encendida, Madrid. The curator Juan Dominguez wanted us to bring a piece that would a performance based on participation and interaction with the wider public, in spaces beyond the art centre.

The title Estamos Aqui Para Ayudar (We Are Here to Help) contained the clue as to the nature of the piece. We would offer our help to the citizens of Madrid, in whatever capacity they might want us. The genuine offer to help the public solve their problems or to fulfil their aspirations and desires hinted revealed that in fact we were being helped by the participating public to create a piece of art.

During the first week of the festival we delivered a workshop on ‘performance and everyday life’ to 12 young local artists, who went on to work as collaborators during the second week when the actual piece was done. A form to solicit help was widely distributed in the weeks before the project, and we received over 150 requests for help from people of all ages and backgrounds.

Every morning at 10 am our Help Team gathered to discuss five pre-selected forms, and we chose one by show of hands vote. During the rest of the day we endeavoured to help the person that had been selected, and over the week we worked on the requests of 5 different people.

Monday: Jorge had bought a pair of sandals in a shopping mall out of town, unreachable by public transport. The sandals were too small but without a car he wasn’t able to change them or get a refund. Our team of 14 collected the shoes from his flat, and travelled by bus and on foot across the surrounding open fields to the mall, where collectively we chose a new pair of sandals that we presented that same night to Jorge.

Tuesday: Rosa asked for a day without noise in the city, specifically complaining about the noise of traffic on her route to work. Out team separated in four sub-groups to travel Rosa’s commuter route, compiling ideas, images and objects, and creating impromptu actions to reduce urban noise. Each group created a map for Rosa detailing their actions and suggesting different things that she could do on her journey to avoid undesired noises.

Wednesday: Magdaleno, a 72 year old widow, asked us to help him find a girlfriend to cure his loneliness. We embarked on a search for a lady that would want to go on a date with him, but with little success. Most widows we approached said they were very happy on their own and didn’t want “any more complications with men”. So we decided to treat Magdaleno to a group date with all the women from our team. We collected him from his flat and took him to a restaurant where he enjoyed a lively lunch with 8 young women, all of whom devoted themselves to hear his life story. He told us: “You are crazy, this is like a dream!” and, being a gentleman, insisted on paying the bill.

Thursday: On this day we decided to respond to the call of Sheik, a West African inter-cultural mediator who asked us for help with the problem of the integration of immigrants. His question prompted an internal debate in our group about the capacity of art to solve real social problems. It also brought us to think about difference and how each of us dealt with it. We decided that the best way we could work towards an idea of integration was to address our personal prejudices and fear of others. Armed with cameras we walked the streets and approached individuals that we usually would not consider speaking to (because of fear, mistrust, prejudice or shyness). Individually we spoke to policemen, builders, a nun, homeless people, immigrants, security guards, an ex-convict, children and old people. We invited them to tell us what their definition of integration was, and posed with them for a portrait towards a gallery of ‘unlikely couples’.

Friday: Being the last day of the project, we presented the team with five requests all filed by artists. Amongst them we inserted our personal request as the creators of the project. We wanted a day off from leading the project, a day to enjoy Madrid and wander the city searching for items for our personal collections: of circles, disposable ice-cream spoons, and fake noses. Our team of collaborators, after over an hour of discussion that we were asked not to witness, decided to select our case. They took us on a journey through the streets of Madrid, helping us to expand our collections, and together we reflected on the whole project as a collection of collections.

The documentation of each day’s action was added daily to an exhibition where all the unselected forms were also displayed, and at 8.30 pm the Help Team delivered a 15 minute ‘performance-presentation’ telling the story of the day to the festival audience. The format of the presentation was different each day, reflecting the tasks and issues tackled during the day, and always counted with the presence of the person that had been helped.