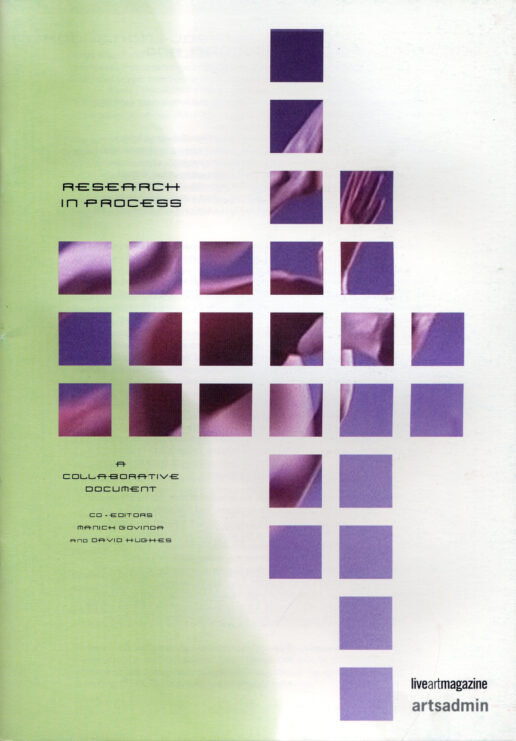 Sitting round a table in Fat Cats Bistro in Nottingham, ‘doing lunch’, David Hughes and Julian Hanby from Live Art Magazine, Manick Govinda and Emma Conway from Artsadmin, and myself, ponder over the title of this publication: ‘Research In Process’.

“Of course”, says Julian with thinly disguised irony, “‘Research In Process’ has the advantage of the graphic possibilities of R.I.P!”

The pertinence of a gravestone epigram is not so peculiar to this project as it may at first appear. The relevance of death to performance practices, reaches well beyond subject matters which confront mortality (as in for instance Robert Paccitti’s recent piece ‘Evidence of Life After Death’) and extends to the very nature of performance itself. The debates around live art over the last decade seem to have circulated around documentation and dissemination – in other words what happens when the performance itself is dead.

Peggy Phelan in her book Unmarked the Politics of Performance (1993), makes this point succinctly:

Phelan’s definition of the ontology of performance as that which ‘becomes itself through disappearance’ does not invalidate the potential of performance documentation, but rather positions it as something other than performance itself. This secure ontological notion has been contested through practices which oscillate between performance and other disciplines. Phelan herself cites the activities of Sophie Calle as an example of a practice which resists easy classification. Taking this a step further, such practices challenge the possibility of classifications themselves. When Roland Barthes designates the space of the ‘text’ as one of “play” as opposed to the self-contained ‘work’, the notion of classification immediately becomes problematic: ‘If the Text poses problems of classification, this is because it always involves a certain experience of limits’ [2]. These limits are often treacherous in the context of performance practices and their documentation, where the too easy common sense assumption is that the ‘performance’ is the live event and that anything subsequent is something ‘other’. This stratification of genre is often based on the preconception that the performance itself is the original – the true. The understanding that witnessing live performance somehow gives us greater access to the ‘truth’ of that work is something that has been directly contested. Amelia Jones in her book Body Art: Performing the Subject (1998), ponders ways in which a work is accessed.

‘Having direct physical contact with an artist who pulls a scroll from her vaginal canal does not ensure “knowledge” of her (as an individual and/or artist and/or work of art) any more than does looking at a film or picture of this activity, or looking at a painting that was made as a result of such an action.’ [3]

By affecting an equalisation of worth in different acts of witnessing, Jones liberates the spectator from the pressure of being there in our contemporary culture which is continually having to negotiate through representations. This is something that Phelan has noted as an unavoidable, specifically in relation to death itself, when considering how our understanding of the trauma of survivors of the holocaust is mediated through secondary sources.

‘As second and third generation survivors know so well, the living witnesses to the theatres of death staged by the Nazis are now dying. The event will soon be able to be known and remembered only through second-order witnessing, through the agency of representations – from films, CD-ROMs, museums, and other public memorials.’ [4]

As our collective need to collate, record and preserve fills the archives, museums and libraries, the specific problems faced by practitioners of live art and performance to adequately and representatively document their work is thrust to the fore of their practice.

The collected authors of the following ‘texts’ have been selected because they were supported by Artsadmin either as recipients of bursaries ‘in the areas of live art and time based media’ [6] or through access to space and equipment. To ask them to annotate the processes of their practical research in a 2D A5 format posterior to their live presentation seems a bit disingenuous. As Walter Benjamin so astutely anticipated in his 1936 essay ‘The Work of Art in the Age of Mechanical Reproduction’: ‘To an ever greater degree the work of art reproduced, becomes the work of art designed for reproducibility.’ [7] What we are presented with in ‘Research in Process’ is precisely that – a group of artists who are responding to the site of a published document. I do not state this as a cause for lament. Although I would certainly acknowledge the necessity for a collective archive of artists’ sketches, plans, maps and scripts, the idea of wading my way through 16 accounts of how individual artists go about the day to day creation of their practice strikes me as interminably dull. The fact that this document represents something else, is perhaps because live artists, as they are continually in the process of negotiating their own body in particular spaces, are especially conscious of the demands of site specificity.

Live Art Magazine, the host and distributor of this supplement, traditionally lists live events and reviews them. It publicises, reflects and facilitates live practices. It is an attempt to get the widest possible public it can, aware of what is happening in this particular discipline – to encourage them to ‘be there’ at the live event. In setting up this supplement, it aims to disseminate how some of those live practices are produced, to engage an awareness of the processes of live art research methodologies. What happens however, is that ‘Research in Process’ becomes another site to which the artist can respond, a separate entity, a meditation on a theme.

Live Art Magazine has a free distribution of over 15,000 – which is many thousand more people than saw the ‘original’ performance pieces. The works produced here then, will be consumed by a much wider audience than ‘were there’ at the performances this publication seeks to somehow reflect. There is a certain inevitability to all this, and I am certainly not seeing it as tragic. I do however want to remind myself as I encounter the printed representations in these pages, that the goal of Live Art Magazine is to get people to go to live artworks. That the supplement stands alone when the magazine listings and reviews have dated, and that in addition to being housed in the magazine, ‘Research in Process’ will be marketed separately, only goes to stress the point that this is a thing in and of itself.

The words ‘research’ and ‘process’ are both verb and noun – both the activity of producing the thing, plus the thing itself. There is to a degree a tautology here. Process is ‘a course of action’ [8], research is ‘systematic investigation’ – both are by their very nature procedural. But research, by definition, is a course which sets about establishing ‘facts’ in an attempt to ‘reach conclusions’ whereas something in process does not stop – it is ongoing. Perhaps what ‘Research in Process’ is identifying, is a systematic investigation, a course of action, which doesn’t end, which doesn’t reach conclusion, despite the fact that the outcome of the research – the live moment – is dead. In discussing Andy Warhol’s obsession with death, Peggy Phelan comments:

‘What compels Warhol in the Marilyn series is how the image performs after the death of its subject, how it remains alive long after its inspiration is dead.’ [9]

Perhaps this could be said to be true for the contributors of this supplement. What compels them (in the most part) are not the remnants of a research process, but rather considering how the new site of this publication might reconfigure some of their interests and ideas now that the performance event itself is dead.

In his introduction to an issue of the journal Communications in 1972, an issue dedicated to the work of contemporary doctoral researchers, Barthes makes a demand for non-institutionalised sites for the dissemination of research and ultimately for the role of research as ‘social production’.

‘The task (of research) must be perceived in desire. If this perception does not occur, the work is morose, functional alienated, impelled solely by the necessity of passing an examination, of obtaining a diploma, of insuring a promotion. For desire to be insinuated into my work, that work must be demanded of me not by a collectivity seeking to guarantee my labor and to gain a return on the loans it grants me, but by a living collection of readers expressing the desire of the Other (and not the control of the Law).’ [10]

This account of the academic institution (here configured as ‘the Law’) as that which stifles genuine creativity in research may now seem a bit dated (I hope), but the introduction of ‘desire’ as that which triggers profound research, while in one sense very obvious, is nevertheless elucidating, in so much as it identifies a key drive for the production of arts practices in general. What is however most intriguing to me about this insight is that it throws responsibility and ownership onto the reader. Here it is the reader, who coming to the research from the outside, is not only positioned at its centre, but also as the key to its inception. In the context of ‘Research in Process’, this publication, the onus on the reader is not only to need these texts, but to go to the live works themselves.

But enough… I shall stop now, and let you read the rest in peace.