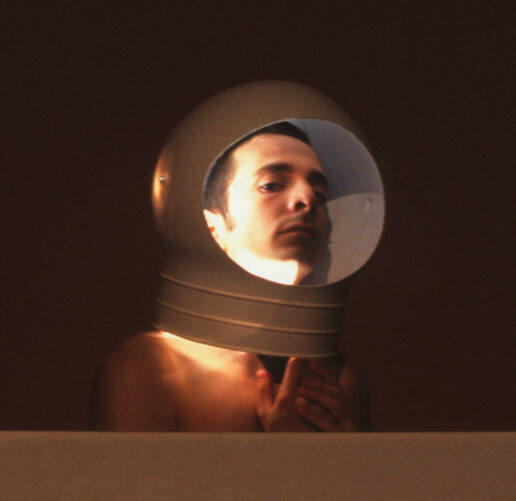 Will Self, Building Design

"Joshua Sofaer took the piss out of the whole thing with a set that had him landing in the alien world of this house in a space craft, dressed in a gown constructed from colour swatches."

The bedchamber as a stage for masquerade, where masquerade is instrumental to the formation and deformation of identities, has antecedents in two distinct but contemporaneous rituals of C17th France. At the architectural centre of the Palace of Versailles the spectacle of the levée at the bedside of the Bourbon Kings daily reinvested the royal body, attended by an audience of nobles, with Absolute and Divine Authority. At the same time, in a vernacular inversion of this exclusively male ceremony, known as caquets – fashionable yet subversive gatherings of females around the bed of a woman confined after childbirth – both the body in the bed and her audience were momentarily freed from the constraints of their gendered roles through bawdy humour and feasting. The presence of an audience guaranteed the identity of the first and destabilised the identity of the second.

In The bourgeois bedshow for Home 2, Joshua Sofaer reinstates the bedchamber as locus of spectacle. His mise-en-scène is the ‘marital’ bed itself with its privileged relation to the intimacy of the domestic interior, that is to say to a normative model of heterosexual intimacy conventionally protected from outside view. Here rows of benches allow a handful of cognocenti of the London art scene to breach, apparently, if only temporarily, that intimacy. The complicity of their spectatorial presence is crucial to Sofaer’s performative interrogation of the conventions of bourgeois domesticity and the commodification of home as art and art as home. Beyond the first level of audience, this exclusive minority who are physically present in the domestic space, he addresses a wider virtual audience watching the live webcast.

Below the central chandelier of the master bedroom (echos of Versailles?) a tented construction acts as set and screen for the performance. The spaceman fantasy that opens and closes The bourgeois bedshow projects Sofaer as an alien body into and out of the heteronormative territory of the domestic matress, camping out and camping up simultaneously. Through a performative strategy full of intertextual reference which he consciously (and ironically) styles ‘post-ironic’, Sofaer uses laughter as a dialogic tool that reveals the anxieties both of art consumption and curatorial practice. In one of his several voices, that of the effete art critic, he confesses: I find it deliciously seductive that it is potentially possible to invest in one’s own interior décor and reap the interest as fine art capital. Again you see – post ironic. It’s something for us all to think about. With neat conceptual economy the target of The bourgeois bedshow is site, time and subject specific: not home, nor even Home, but the Homing of home. I offer ‘Home’ here as an intransitive verb meaning to present lifestyle as practice, lifestyle as identity. Lifestyle, however, is in fact a mask which ultimately protects the intimacy of the inhabitants of 1A, Flodden Road.