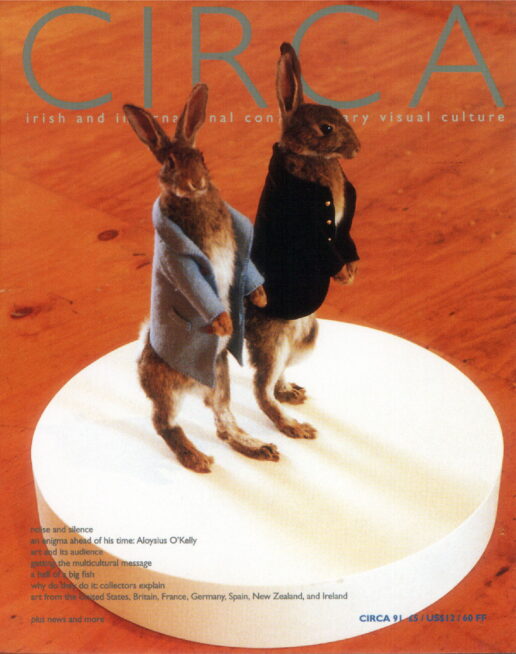 Winter in London has been marked, as it has been for the rest of Western civilisation, by the anticipation, celebration and deliberation of ‘The Millennium’. The centre of London was transformed for a forty-eight hour period into a public installation titled ‘Big Time’, where two and a half million people gathered to watch a massive pyrotechnic display at midnight on 31st December 1999. Having struggled with my sister and my partner, to clamber onto the top of a bus shelter, opposite Big Ben on the South Bank, we had a camera-crew view of what was an extraordinary display. The magnitude and extravagance of the event encouraged me to contemplate the position of fine art in the culture of mass spectacle and mega-visual systems which are growing in size, capability and complexity daily; a world where Turner Prize winners are wooed by the ‘possibilities’ to steer the advertising campaigns for multinationals. I got thinking about something that Sarat Maharaj said in response to the question ‘Why do we need art anymore?’, and I don’t want to misquote him, as I just happened to stumble upon one of his lectures at Goldsmith’s College, but what I understood him to be arguing, was that the need for art practice is perhaps a need for the scrutiny of consciousness. At a cultural moment where slippages of media encourage us to consider advertisements or even shop window displays, with a similar critical digestion as we might more easily identifiable art practice, there is a reinvestment in attempting to access our subjectivity. This seemed to be one of the underlying themes of the recent day conference at the ICA, ‘Understanding Experience’ organised by Kate Love, which acknowledged that despite being pervasive throughout cultural practice, experience is a category not necessarily understood. Sitting on top of the bus shelter however, I just gawped, as hundreds of multicoloured explosions burst in the sky above the Thames.

The desire to master the sky and the power it has to captivate, was something which Ernst Fischer played with in his performance lecture ‘Flight of Fancy’ which I saw earlier in the month at Raleigh Hall, a warehouse space in Brixton. This text-based piece was a kind of ornithological queering, which used mating displays and sexual habits of birdlife as a metaphor for rethinking a contemporary notion of sexual identity. Dressed as a bird without wings, Fischer delivered a choreographed stream of consciousness. Rather than fixing a queer stance through an essentialist identity politic, he used his metaphorical template, that of the bird and flight, as a way of posturing a knowing absurdity. “What can distinctions really mean in the world of birds,” he says, “where everyone has a pecker.” The effect of such repeated punning was less that of the camp throw-away and rather highlighted the impossibility of finding a solution to the struggle for personal identity. The possibility of liberating indeterminate or marginalised identities, was then, figured through a surreal twist of the aspirational trope of flight.

“Why has a hairy little insect that eats shit and is no good to anyone, that gets on your nerves with its incessant buzzing and its lack of discretion, why has the Fly been given the name of one of mankind’s most cherished dreams?”

The desire for flight and its connection with sexual desire forms the basis of Freud’s extended essay on Leonardo’s dream, where he interprets the vulture’s tail striking the infant Leonardo’s mouth as the possessive phallic mother. Freud reads the account as evidence for Leonardo’s latent homosexuality, the unacknowledgement of which Freud posits was the cause of Leonardo’s feelings of failure. The ‘phallic mother’ is lent the infant’s phallus through an act of displacement – and as Fischer irreverently points out in ‘Flight of Fancy’ this forces the question “Does that mean that Leonardo dreamt about sucking his own dick?”.

Leonardo’s other dream – to be airborne himself, was manifest by his design for a flying machine. The machine, which was unrealised in his lifetime, forms the centerpiece of the exhibition ‘The Art of Invention: Leonardo and Renaissance Engineers’ at the Science Museum (which runs until April). The eleven meter full-scale model and miniature motorised maquette were for me the highlights in what was an educational but otherwise rather dull exhibition. On view there are over forty working models of the machines of the Renaissance ‘artist-engineers’ which have been recreated from the original drawings. The endless series of catapults, pulley systems, war machines and even a man powered car have been made using the same materials and construction techniques that would have been employed during the Renaissance. After a while these machines began to look the same – once you had seen a couple, you had seen all forty. The accompanying gallery information stated, with excitement, that these machines did actually work; that you could really shift a ten ton slab of stone with this pulley system. What remained the most intriguing however, was Leonardo’s failed aspiration to be airborne – a machine that, made five hundred years after its design, long after air travel has been possible, wouldn’t even be able to get off the ground except as a suspended model in a museum.

These failed flights – my clambering onto the bus shelter, Ernst Fischer’s bird without wings, and Leonardo’s flying machine, seem somehow particularly pertinent, bringing us back down to earth at the turn of a century which anticipates flying cars and package tours to outer space.

References:
‘Flight of Fancy’ by Ernst Fischer was one of four performance pieces shown in Somasite, 2 – 5 December 1999, Raleigh Hall, Saltoun Road, London SW2
‘The Art of Invention: Leonardo and Renaissance Engineers’ runs from 15th October 1999 – 24th April 2000 at the Science Museum, Exhibition Road, London SW7
‘Understanding Experience’ was a day conference, Saturday 20th November 1999 at the ICA, The Mall, London SW1
‘Big Time’ was the title of London’s Millennium celebrations which were centred around the River Thames, and ran from 31st December 1999 to Monday 3rd January 2000
Freud’s extended essay on Leonardo da Vinci is published as ‘Leonardo’ by Sigmund Freud, 1963 (1910) Pelican, Middlesex, edited by James Strachey