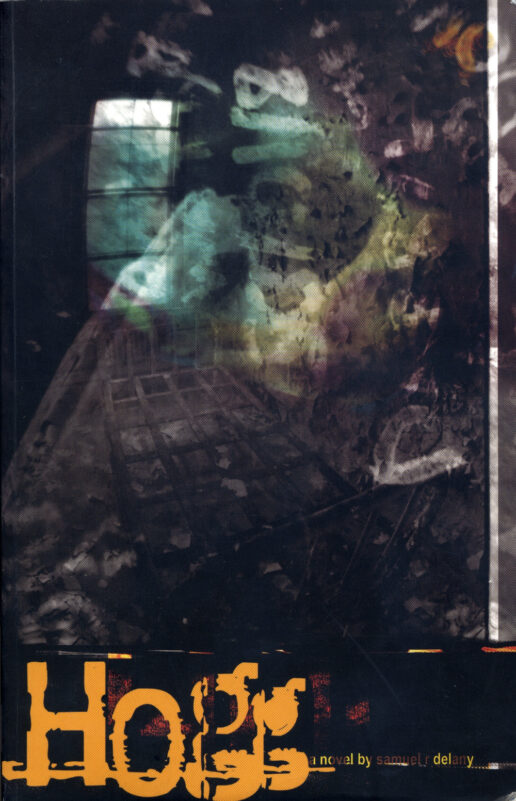 Any review of Samuel R. Delany’s Hogg must prepare the reader for the explicitness of the content; an explicitness marked even before you begin to read the book by the keyword indicators in the peritext.

Hogg is explicitly and violently pornographic. Delany takes his readers to the limit of readability – but as long as you keep reading, you repeatedly face up to some of the darkest and most carefully hidden parts of your own desire. Presented in a similar format to the conquests of Walter in My Secret Life by Frank Harris (1890) and the narratives of de Sade, Hogg follows the encounters of the boy-narrator-protagonist in a catalogue of sexual and violent acts which he witnesses, or more often participates in, particularly in relation to the dirt-encrusted trucker come hit-man Hogg.

Delany forces his reader through page after page of violence and abuse. As a reader I found myself varying between arousal and disgust (and occasionally disgust at my arousal), between groping my throbbing erection and plunging my hand into my crotch the way nervous children do, trying to find my shrivelled cock, which had withdrawn in horror at the narrative. Reading Hogg makes you viscerally complicit.

‘I heard him grunt. He smelled like a stopped toilet-stall, where somebody had left six months of dirty socks, in the back of a butcher shop with the refrigeration unit on the blink, on fire. The tube under his dick filled, retreated, filled again; and spilled enough spunk for three guys. “Pissin’ in you now boy….” Not like Pedro’s or his pop’s shotglass leakage. I swallowed five times (he was still pumping into my face), and I couldn’t hold no more. Piss spurted all over his fly – I could see pee between the zipper teeth. Piss ran down my chin. He got my head – like I saw this really big-handed nigger hold a basketball, once, and turn it upside down without dropping it – and with his other hand wiped hard around his chin and face, smearing piss. He rubbed his balls with wet fingers, pulled at them, while I leaked piss out of my lower lip. “Yeah… I’m gonna drown you, cocksucker!”’

Written in San Francisco in 1969 and revised over the next four years, Delany did not find a publisher for Hogg for over twenty years after its completion, despite a backlist of popular successes as a writer of fiction, science fiction and non-fiction. Even the editor at Olympia Press, who first published Lolita, said that Hogg was the only novel he’d ‘ever rejected solely because of its sexual content.’ When it was issued by Black Ice Books and FC2 in 1995 it was published in an edition of just five-hundred. The current reprint by FC2 is the first time Hogg has been issued to a wider readership.

Although Hogg is not autobiographical, the unnamed child protagonist and narrator would appear, in part, to be Delany. The racial ambiguity of the narrator-protagonist (he slips between a black/white identification) could very easily be Delany himself, who has described elsewhere his ability to ‘pass’ as white. Hogg is an autobiography of the pornographic imagination. Related works by Delany include the memoir The Motion of Light in Water (1988), the novel The Mad Man (1994), and the graphic novel Bread and Wine (1999). Even where there is no ‘resemblance’ to be found, the extreme nature of the content brings us back to the life of the author; we inevitably ask: what kind of guy would write this stuff?

My own boredom with much of gay fiction in which the older, educated, usually white author-narrator-protagonist recounts his predilections and fantasies for a usually younger, less educated, often racially or ethnically othered working class ‘boy’, makes Hogg a radically refreshing read. Here it is the kid who not only offers himself up as an object of the abject desirable, but it is he who actually embodies the corruption the other characters perpetrate. The unnamed boy-narrator is always one step ahead of his ‘master’ Hogg; a dynamic which is made explicit only in the brilliantly conceived ending, when he makes his desire clear.

Because none of the sex acts in Hogg correspond to the body-minded gay aesthetic we have come to expect in gay fiction, and because of the integration of heterosexual sex into the narrative, Delaney’s novel is more un-gay or anti-gay fiction.

‘His cock, hanging wet from his fly, was wormy with veins. So were his big, big hands. His broad nails were bitten so far up they were three times side-to-side as from thickened, dirt-lined cuticle to bulging, grease-rimmed nub – which, on his thumb at least, went on another horny half inch. His fingers were immense and chiselled, the upper joints clouded in yellow. He was a big man, with the start of a gut. Yellow hair tufted between the missing buttons at the bottom of his shirt, and all up around a neck thick as a scrub pail. Watching him, I got the thought that maybe a month ago he’d been on his back under a car and hadn’t bothered to wash since. His hands and forearms, under the gold fur that burned in the four o’clock sun striking up the alley, were grease-gray. His face was like sunburned brick, smeared and streaked over.’

But while Hogg still feels incredibly fresh in the way it turns the expectations and tropes of gay fiction on their head, especially in the way it positions the locus of desire, more troubling is the depiction of the female characters. While men are subject to the same kinds of abuses as women in the book, it is men (or boys) who are empowered as the perpetrators of abuse and it is their story that we follow. We see the male characters in their ‘downtime’; they are more rounded; somehow we find ourselves identifying with them; but with the exception of the girl Maria, who giggles while she is being fucked by her drunken father, women are portrayed as passive victims of abuse.

Along with other sexually violent fictions (like Dennis Cooper’s Frisk and Try) Delany takes you on a purgative journey. You face some of your darkest fears and desires, and are brought out the other side, somehow cleansed. What marks Hogg out from other such fictions, is that it is narrated by a boy, and not a man. This conceit of the child-narrator has the effect of reminding us that what we are reading is a fiction, it is literature. The vocabulary is not that of an early adolescent street kid. Although Delany makes use of the vernacular, Hogg is clearly the work of a dexterous novelist rather than a corrupt pubescent boy. Recognition of this acts as a distancing device, a constant reminder that we are reading a story.

Unlike sex itself, Hogg is not more-ish. I was relieved to get to the end. But the relief was not that of dutifully completing a novel I got no pleasure from, rather it was the relief of a challenge accepted and fulfilled, an exhausting journey that made me want to consider what I had discovered along the way.