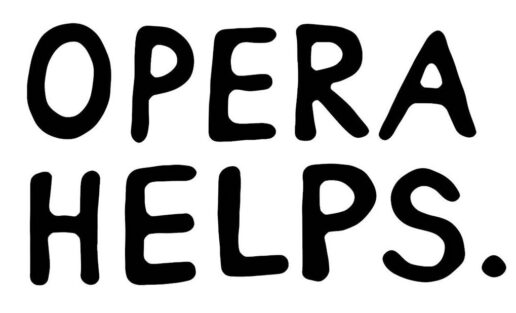 'To listen to music, chosen specifically for you, just a few feet away, is a powerful experience. After two bars, I weep. When the aria is over, life feels renewed.'

'It is a powerful, emotionally draining performance, and one that seems to resonate around the room for some time after she has finished. [...] There is something dramatic about the way my front room transforms itself the second Caroline puts on a backing track from her portable speaker and launches into crystal-clear song. The whole experience is extremely intimate - not just because of where it is taking place, and the subject matter at hand, but also, I realise, because there is something almost primeval about the way an opera singer's voice cuts through and connects with the human soul.'

'The effect is still with me. It was a fantastic, emotional and moving experience.'

'I want to say that listening to the aria chosen by the singer was one of the most wonderful experiences of my life. The chosen aria allowed me to contextualise my own problem. There is no way of describing the incredible emotional effect the music had on me. Some three days later I am still unable to completely believe what happened.'

'This was one of the most amazing artistic experiences I've had. The connection with the opera singer was so direct and deep, emotionally, but in a really good way: not at all uncomfortable or intimidating, but friendly and helpful in reflecting on the problem I'd written about. I had a visceral response to the aria; I cried during and felt the need to hug the singer at the end. I felt I had been blessed with a very special and unique gift - one I will treasure always and never forget.'

Are you lovesick or facing divorce?
Has your partner stopped listening to you?
Do your children disrespect you?
Do you have a poor relationship with your parents?
Are you grieving someone’s death?
Opera Helps.

Opera Helps is a site specific art project in which professional opera singers visit people in the comfort of their own homes, and sing to them – one to one. It harnesses the redemptive power of opera to help with participant’s personal problems. Unlike therapy, or a trip to the doctor, it doesn’t aim to cure the problem – but past participants have found the experience deeply affecting and have felt that their private space feels different afterwards.

Taking part in Opera Helps is an intimate and personal experience. People who have a problem – it can be anything that they find worrying – apply to book a session and an opera singer then visits their home. The singer listens attentively to the participant’s description of their troubles, and then selects a suitable aria to sing. The power of the voice in the domestic space creates an intense and moving experience; the participant hears music in an unfamiliar way, encouraging them to listen attentively, while focussing and reflecting on their individual problem.

Anyone in the participating areas can apply for an Opera Helps slot. If it’s felt that Opera Helps can meet the applicant’s needs, an appointment will be made for a professional opera singer to visit their home, listen to the problem and select an aria that relates to the problem. The aria will be sung to the participant as they relax in their most comfortable chair, or even in their bed.

Opera Helps lasts about 30 minutes. It is completely free.

A pool of professional singers are specially trained by Joshua (an accredited Relational Dynamics coach) to listen appropriately and not to offer advice or counselling but to empathise and to ask simple, open questions.

Opera Helps by Joshua Sofaer was produced by Wunderbar. It was presented in partnership with Heart of Glass, Colchester Arts Centre and Norfolk & Norwich Festival and in association with OperaCoast. It was funded by Arts Council England.

Opera Helps was originally commissioned and produced by Folkoperan in Stockholm as Operahjälpen. It was devised, created and directed by Joshua Sofaer

Operahjälpen was produced by Jonas Palerius, Linda Beijer and the Folkoperan team.

1 – How did this idea come about?
I met Mellika Melouani Melani, the Artistic Director of Folkoperan, at a seminar in Oslo where we were both presenting our work. I was very interested when she described what Folkoperan were trying to do and I loved the idea of a ‘People’s Opera’. When Mellika invited me to propose an idea for Opera Showroom, I thought about what opera could ‘do’ in the world. For a long time, I have been a passionate audience of opera but I have never worked with opera singers professionally. I wanted to think about what it was that opera did to me. Why did it make me so emotional? For the right people, opera is a bit like a drug. It gives you a ‘fix’. I passionately believe in the power of art to change lives and to offer people the opportunity to see things differently, or to be given permission to behave in a new way. Operahjälpen comes out of those sets of concerns. For the last years I have been making work that considers what happens in the space of art meeting an audience. Operahjälpen is part of that body of work.

2 – What kind of music, what composers, in your opinion are the best to heal one’s soul? What about you personally?
I don’t think that any single composer is ‘best’. It depends on the context and individual mood. We had to use well-known repertoire for Operahjälpen because we were reliant on the backing orchestrations that have already been recorded. This meant we were limited to the classic 18th and 19th Century opera works. Those classics of Italian and German opera are, though, the ones that I suppose most people immediately have an emotional response to. They ‘cut through’ you somehow and get straight to your emotional core.

It is important to stress that Operahjälpen is not Music Therapy. I have been training as a Relational Dynamics Coach because, as an artist, I am interested in thinking about new ways of communicating with audiences. I have shared some of my own learning with the singers, so that they can actively listen to the problems that people present. But we are not offering therapy of any kind. We are simply offering opera. Some problems may be too big for Operahjälpen but probably no problem is too small. (If we are presented with problems that are too big for us, we will redirect people to conventional counseling services in the city.)

3 – What difference does it make to have a singer coming to your home instead of going yourself to a concert or listening to a CD?
Well there are a lot of differences and I suppose it is these reasons that are the point of Operahjälpen. The first point is that when a singer comes to your home and listens to your problem first, when they later sing to you, you feel that it is you who are being uniquely addressed. This forces you to listen in a different way. There is an exchange at play. The singer listens to your problem and you listen to the singer. The second point is that the force and power of the voice in a small space (certainly smaller than an opera house) is incredible. I don’t think people are prepared for the impact of that sound, even when they know it is coming. The quality of the sound reverberating around the room ‘hits’ you in the chest. There is a kind of vibration (a physical vibration) that happens in your body. The third point is that the sound changes the room. At best, there is a kind of ‘haunting’ that happens in the room after the singer leaves. The sound somehow lingers. If you go out of the room and return, you remember the sound of the singer in that space. The space has changed. The fourth point is that it is your space. It is true that when you go to a concert, you necessarily bring all your own problems and issues too, and that going to a concert can be cathartic and life enriching, fulfilling a personal need. In a way, all we are doing with Operahjälpen is to highlight that by reversing the priority. In a concert it is ostensibly the music that has the priority, and it may or may not address your personal need. In Operahjälpen the individual problem has the priority and it is this that enlists the music. But paradoxically, I believe that in Operahjälpen people listen to the music more attentively than they would otherwise do, and therefore, the music assumes ultimate significance, and hopefully, the problem slips away. There are probably more reasons but maybe that is enough for now.

4 – Would it be as effective if it were instrumentalists instead of singers coming to people’s homes?
Maybe. I haven’t tested that yet. But then it wouldn’t be Operahjälpen, it would be Musikhjälpen. Actually, I think that there is something very particular about singing, and that it comes from a human voice. Opera is both at once elemental and highly trained. It has been a great privilege for me to work with these singers who have spent years and years training their diaphragm and larynx to produce this amazing sound. There is something about the opera voice that we can identify with, but untrained, cannot produce, and that is magical.

5 – Is this a project that has already been organised somewhere before or is it the first time?
This is the first time the project has been made. I have worked on projects in people’s homes before but not with opera.

6 – Why in Stockholm?
Part of what I love about my job is that I get to travel all over the world making different projects. When Mellika asked me to propose a piece for Folkoperan, I jumped at the chance. I’ve really enjoyed being in the beautiful city of Stockholm.