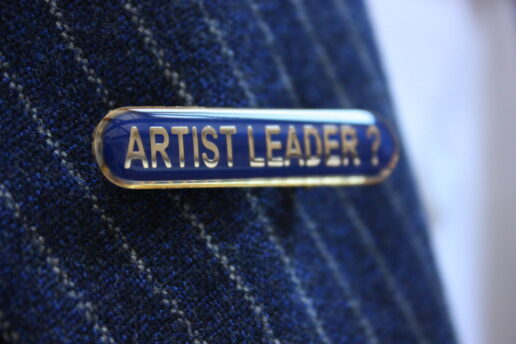 ARTIST AS LEADER:
Or should that be ‘redael’?

For the first time in the 2010/11 intake, the Clore Leadership Programme named a dedicated ‘Artist Fellow’. This provoked the questions: What does it mean for an artist to be a leader? How does leadership manifest in the things artists do? How can we rethink the role of an artist in the context of the need for leadership?

Selected as the Artist Fellow, I wanted to unravel what exactly ‘artist as leader’ might mean. For many of my artist colleagues the idea does not scan. Even more, some consider it laughable, almost as if the words sit in opposition to each other.

An important precursor to my investigations was the work of Anne Douglas and Chris Fremantle, who undertook a three-year research project, The Artist as Leader (2006-2008) and published their findings in 2009. One of the conclusions of their research is:

‘The need to publicly recognise where artists are leading, and have led, through practice; highlighting the relevance of their leadership to wider cultural, social, environmental and economic development.’ [1]

This ‘need’ has been a foundational principle of the 7 interviews that formed the basis of my own research project.

Most artists are ‘portfolio people’, which is to say that they work with a range of different individuals and organisations in a variety of contexts. As Charles Handy says in his book The Elephant and the Flea: ‘…portfolio people are seldom in a position to run any sizeable organisation. We do trade power for influence.’ [2]

If artists are leaders, then surely one of the main ways in which that leadership is revealed is through the effect of influence.

Although it is true that artists are in positions of executive authority and identifiable leadership roles in the conventional sense, across culture, in my perspective, leadership is resolutely not (necessarily) a position in an organisation, and definitely not (necessarily) the ‘head’ of an organisation. The aim of the interviews was to bring together an exciting series of inspiring examples that would collectively interrogate the idea of the ‘artist leader’. Although the limited scope of the study did not allow for a comprehensive ‘survey’ there was an attempt to visit artists in different kinds of situations: artist collectives, artist run institutions, those making community based practices, artists working with business, and in education.

• Field Theory, an artist collective based in Melbourne, Australia, who came together to support each other and the wider sector
• First Draft, a long-standing Artist Run Initiative in Sydney, Australia, which is run by a rotating board of 8 practicing artist Directors
• Masato Nakamura, an artist based in Tokyo, Japan, who has recently set up an ambitious new model of art centre, 3331 Chioyda
• Richard Layzell and Richard Hicks, who collaborated as artist and businessman respectively at AIT software company for 7 years
• Kate Love, Senior Lecturer at Central Saint Martins College of Art & Design in London, who trained as a painter and has worked in a range of art colleges
• Cornelia Parker, sculptor and installation artist who has exhibited internationally at many of the major world art institutions
• David Wilson, Founder and Director of The Museum of Jurassic Technology in Culver City, Los Angeles, California

In almost all cases, interviewees were reluctant, or even opposed, to using the term ‘artist leader’ without considerable clarification. Although many of the interviewees recognise that they are exercising a form of leadership, most eschew the term ‘artist leader’ for themselves. Part of the disavowal of the appellation ‘leader’ is caught up with what many consider the inescapable popular definition of the term as ‘one who issues commands’. This is seen as irreconcilable with much of what interviewees reflect their art practice to be about, which often seeks to interrogate structures of power.

Presented with an expanded notion of leadership as ‘a creative behaviour that is conscious and intentional about change’, interviewees were, in general, more willing to see what they were doing in terms of a leadership agenda but remained sceptical as to the use value of a term that had to be reimagined before it could effectively mean something.

But if we are to understand leadership as a matter of affect and not of intention, which is to say that we judge leadership by impact (rather than, for example, as a titled position of authority) then we need a way of recognising the impact that artists are having through the range of modes with which they operate. It is precisely because artists find value in doubting the terms of ‘conventional leadership’, that they make inspiring leaders.

A lot of Parker’s work presents itself as counter-intuitive about the act of creation. Squashing, exploding, ripping apart, Parker uses destruction and deconstruction as part of her creative process. This flips on its head the idea of what creation might be and has formed a new vocabulary of creativity. In this sense, Parker has ‘led the field’ in contemporary art. When presented with this reading of her work, she says, “Perhaps I should be leader backwards: redael”. Although Parker makes this statement in a light-hearted and jokey way, this idea of doing leadership backwards, of being a ‘redael’, may hint at a new way in which we can understand what ‘artist as leader’ might mean. Perhaps ‘redael’ can act as a metaphor for a form of leadership, which is both on the one hand visionary, inspiring, influential and innovative, and at the same time, questioning, interrogative, plural, and doubting.

While the argument for the power of ‘creativity’ is being made across business and social sectors, it is important that those directly involved in arts practices do not lose influence through the disavowal of a set of terms that have come to mean something limiting in certain contexts. As the politics of identity (especially the terms of sexuality and race) proved in the second half of the Twentieth Century, it is only through the reclaiming of language that you take hold of meaning and effect change. It is when terms are forced to resignify that they are put to work for a different agenda.

To listen to the unedited recorded interviews or read highlights, visit:
Artist as Leader