In my last blog posting I mentioned staying in the extremely evocative surroundings of Villa Eläintarha in Helskinki, the restored 19th Century wooden building, part museum part artists accommodation. This past week in Turku, a morning to spare, I decided to visit Luostarinmäki Handicrafts Museum. To be honest, I had never heard mention of it before and had no idea what to expect.

Luostarinmäki Handicrafts Museum is an amazing collection of 200-year-old wooden cottages that stand on their original sites. You wander around the streets and are transported back in time. Some of the buildings date to the 1780s.

In 1827 The Great Fire of Turku destroyed two-thirds of the city but the Luostarinmäki area remained intact. When the city authorities decided to create a new town with fire safety at its core, Luostarinmäki was condemned and abandoned. It lay dormant for nearly 80 years before a plan was put in place for its preservation.

The cottages were restored and turned into craft worker’s homes and workshops, often furnished by master crafts people. The Handicraft Museum opened to the public in June 1940.

Wandering through the streets time is reoriented and it is very easy to imagine what it would have been like generations before. There are many so called ‘living museums’ around and they can often feel a bit crude and theatrical but Luostarinmäki Handicrafts Museum has managed to strike a very even balance between heritage, preservation and recreation.

One of the most interesting parts of the experience of visiting are the details of the wooden architecture.

There is a tendency to over-control the aesthetic at times. Everywhere you look could be a page from a glossy ‘shabby chique’ picture spread from an interiors magazine.

But the old worn surfaces, especially of the wood, are extremely inviting.

This is a nice contraption. It’s an angled mirror positioned at a window, so that the ‘curtain twitcher’ can see who is coming down the lane without having to press their nose against the glass.

It is perhaps the examples of traditional Finnish building techniques and use of timber which are most seductive. Inside the the cottages there are also wide-ranging displays of crafts and skills from lithography to tobacco rolling. Here is the Glovemaker:

One of my favourites was the studio which took responsibility for the interior decor of all the Luostarinmäki cottages. Pigment ground to make paint and stencils cut. Part of the concept of the museum is that the upkeep is made with traditional skills made on the site. So they weave the cloth and make the clothes that they will ultimately wear. Here the stencil designs and paints will be used for the upkeep of the rooms.

Almost everywhere you turn there is something interesting to look at.

Here the traditional Finnish bread is strung on poles underneath the rafters.

I particularly enjoyed the textile designs, again all handwoven on site.

Each space is illuminated by the natural light that creeps in through the window. These beautifully glazed frames demand the spectator to look anew at the world outside. 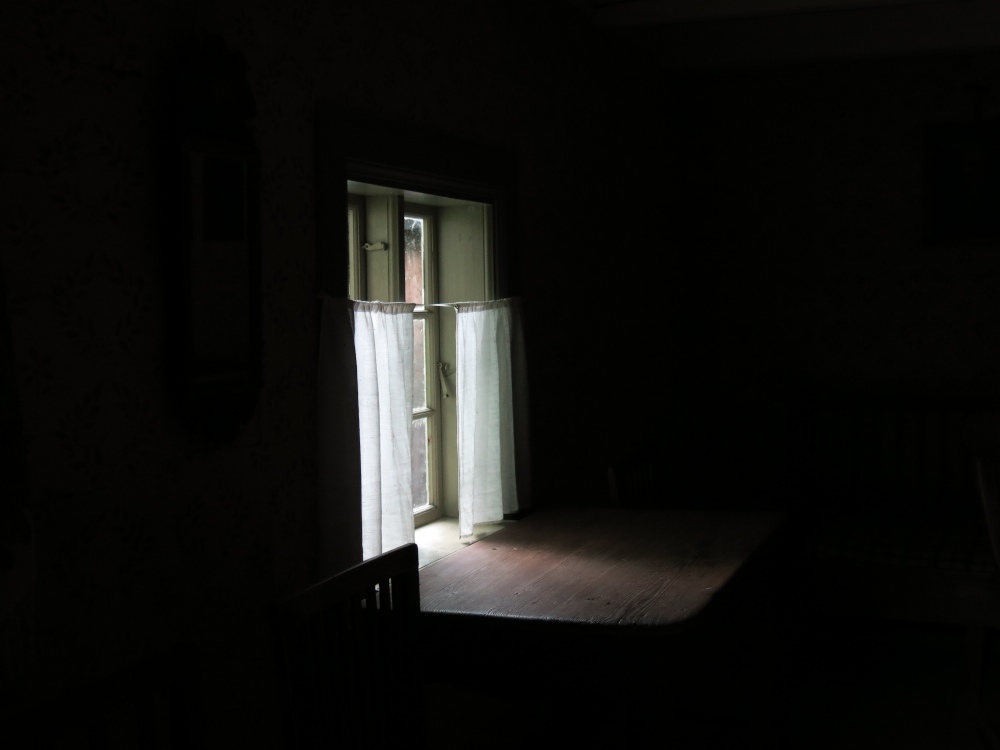