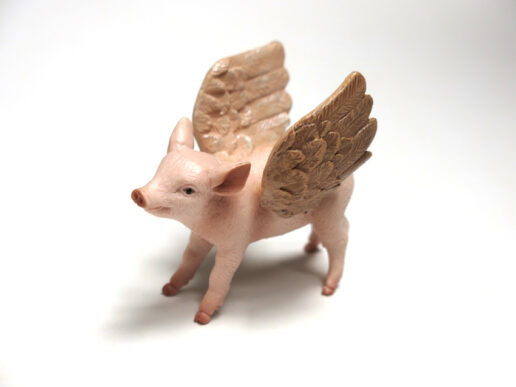 ‘I soon realised that I place restrictions on my own creative thinking, by wanting to know ‘how’ rather than ‘what if’.’ Ian Greenall

As artists making work, perhaps especially in the public realm, we are constricted by practicalities: health and safety, planning consent, the laws of physics, budgets. What if there were no restrictions at all? What if you really could do absolutely anything? Would you be freed to let your imagination soar, or would you by paralysed by the metaphorical blank sheet of paper?

Over five weeks, a group of 6 artists working with strategies of live art, visual art, community art, and work in the public realm, were invited to think the impossible in the town of St Helens in Merseyside with Joshua Sofaer and Karen Christopher. If you could entirely transform the town and its people, what would you do? We explored seemingly impossible works that have already been made: works in outer space, or with casts of thousands, or that last for 1,000 years. We considered the idea of proposal making as a form of art making in itself. Participants also spent time considering how to communicate their proposals in a public presentation.

The artists participating on This Will Never Happen were:

‘…the structure of these workshops led me as a participant to push myself at each stage in a must faster way than anything I have previously experienced.’ Cath Shea

Session 1 – Introduction
Facilitated by Joshua Sofaer
We shared something of our practice to date and our hopes for the workshop. We explored ‘impossible ideas’ that have been made and others that have never passed the stage of proposal. Participants were guided through exercises that stretch beyond the possible.

Session 2 – Our impossible ideas
Facilitated by Joshua Sofaer
Thinking specifically about St Helens, we began to explore how we might formulate impossible ideas for the town and the people that live there.

Session 3 – First Ideas
Facilitated by Joshua Sofaer and Karen Christopher
Participants presented their first ideas for impossible artworks in St Helens. We then discussed how ideas could be further developed and began to think about presentation style.

Session 4 – Developing Innovative Presentations
Facilitated by Karen Christopher
How does the presentation of an idea alter the idea? We explored ways to engage the audience through different dynamic possibilities, visual images, and staging.

‘It was so refreshing to be able to play with impossible ideas, which I realised had the potential to be possible in the end, and I concluded that impossibility is just a mentality.’ Naoise Johnson Martin

Kidnap by Cath Shea is a proposal for the kidnapping of World Leaders and replacing them with artists who then run the world.

Festival of Failure by Ian Greenall is a proposal for an annual 3-day long festival of failure in St Helens.

The Maze of Displacement by Claire Weetman is a proposal for a moveable maze whose walls are made of 3000 people, which itself migrates 3000 miles south, across Europe.

Contesting Spaces by Jeni McConnell is a proposal for engaging communities in contested spaces through active discourse, performance and celebration… and a giant bell-jar.

Ad Hack by Michelle Wren is a proposal for reclaiming advertising hoardings across the town and transforming them into new physical spaces for creativity and learning.

Yellow Door Airlines by Naoise Johnson Martin and Rhyannon Parry is a proposal for artist residencies in the sky, travelling between the 6 destinations in the world that are called St Helens.