The Ny Carlsberg Glyptotek is an art museum in the centre of Copenhagen, and where I will be spending part of my residency here in Denmark, at the invitation of Live Art DK (and thanks to the Danish Arts Foundation and the Danish National School of Performing Arts Further Education).

Jacob Jacobsen set up the Carlsberg brewery in 1847 and named it after his only son, Carl. Carlsberg has the Danish meaning, ‘Carl’s mountain’. As an adult, Carl set up a rival brewery, the ‘new’ or ‘Ny Carlsberg’. (Father-son rivalry gave way to reconciliation and the two breweries were amalgamated on Jacob’s death.)

Carl was a very wealthy collector and his foundation, the Ny Carlsberg Foundation, built the Glyptotek to house his collection, for benefit of the nation. (Glypto-, from the Greek root glyphein, to carve and theke, a storing-place.)

The museum philosophy, from the beginning, was that it was a place to wander, to stroll around, rather as if in a garden, and to learn afterwards. This idea is built into the fabric of the building with an impressive Winter Garden at its heart. A glass covered dome lets light into a central courtyard where the leaves of Mediterranean plants brush marble limbs. 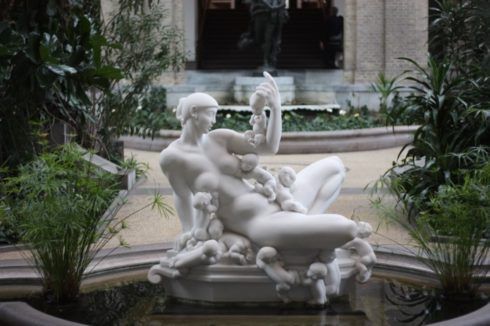 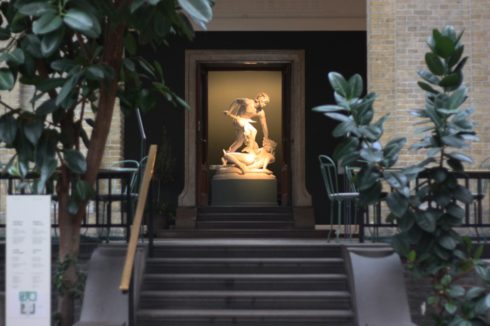 Interesting vistas abound. Around one corner I spied a selection of busts that looked remarkably similar to each other. 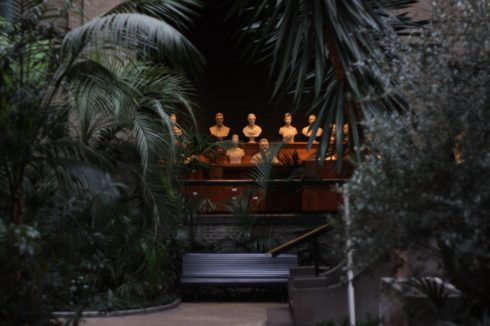 And that was because they were. These are all busts of Carl Jacobsen and his wife Ottilia by a range of different early 20th Century sculptors. Collecting these together in a single display appeals to me enormously. Repetition and difference, ‘having the set’, and lining them up, are key attributes of the ‘collector type’. (It is said that there are two types of people: those that are collectors and those that are not.) These principles of display carry throughout the museum. The most basic tenant being displaying on a straight line. 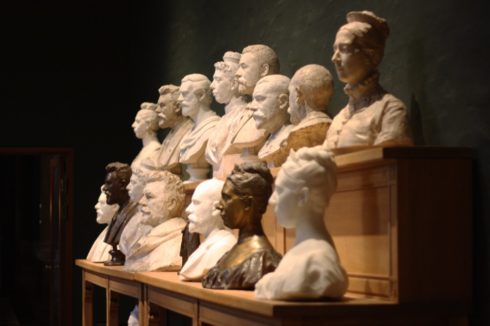 I opened the bottom drawer of a cabinet and came across Carl’s death mask. I suppose it makes sense that the ‘not-art’ would be relegated to a bottom drawer but it also seems somewhat overly apologetic, given that this was cast from his actual body. 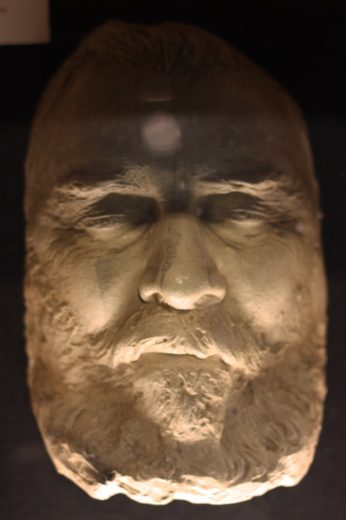 Up some steps from the Winter Garden, the pathway opens out into the colonnaded Central Hall, an impressive (though bordering on stage-set artificial) neo-classical structure, which houses original works from ancient Rome. 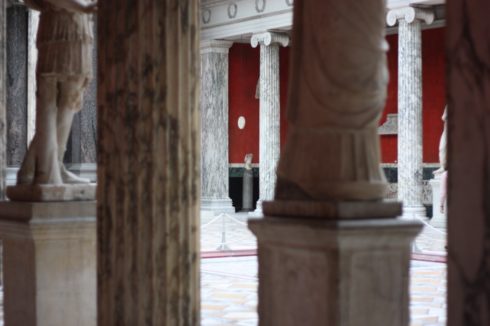 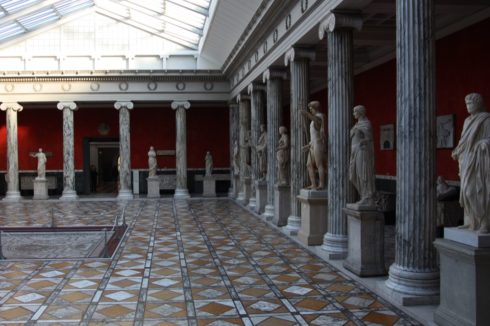 Beyond the Central Hall are rooms which display marbles from antiquity. Again, the arrangement is orthogonal. Take a look at this company of heads. 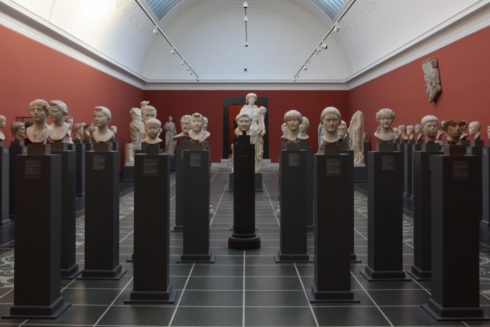 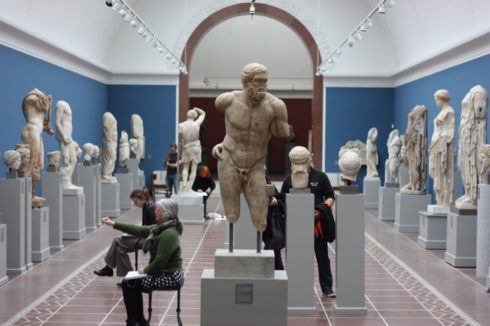 Rumour has it that this exhibition is currently subject to review and a plan is afoot for a more contemporary set of display principles. I can see why they might want to try something else, and at the same time I can’t help but feel the unremitting use of the set-square has its own uncompromising attraction.

Although perhaps the stars of the show are from ancient Greece and Rome, the Glyptotek also has an important collection of 19th Century sculpture and painting, as well as a collection from ancient Egypt. Whether Degas ballerina or Etruscan tomb figure, the straight line display prevails. 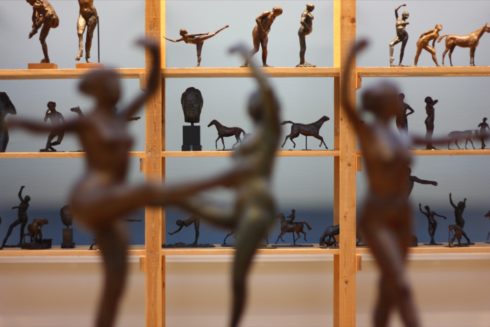 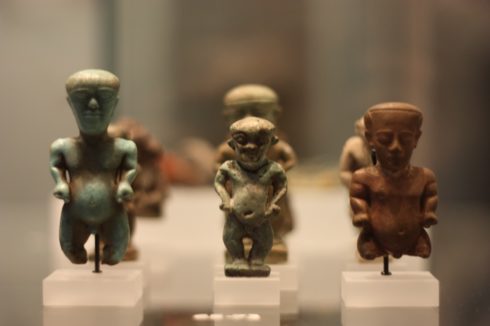 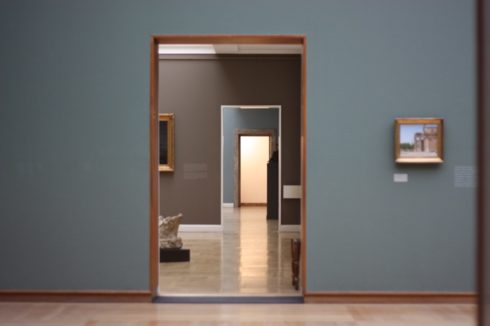 I was reminded of, and somewhat experienced, The Artist’s Despair Before the Grandeur of Ancient Ruins, as graphically depicted by the 18th Century painter Henry Fuseli. 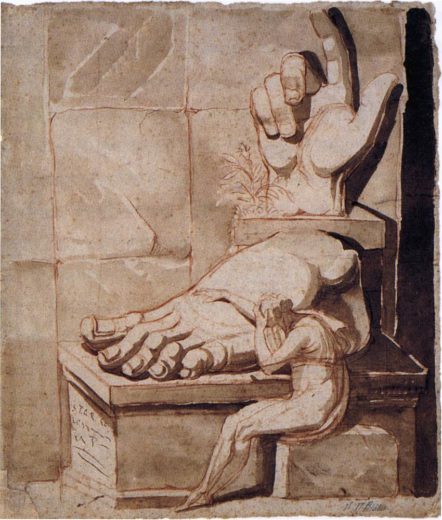 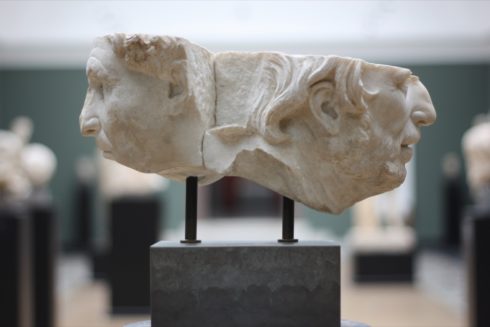 And although I was aware that most, if not all, of the works would have been painted in bright colours when they were originally in situ (and there are ‘recreation’ reminders dotted around), it is almost impossible not to be seduced by the way in which time has knocked these marble shapes about.

Strolling through the galleries casting your eyes over these rows of heads, every so often one will turn its neck to face you and return the gaze. 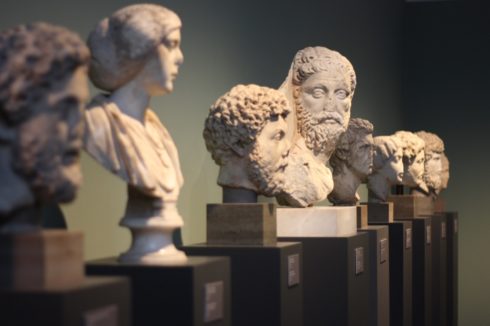 But while most of these heads can see, more often than not they cannot smell. Noses are remarkably absent in the antiquities of Glyptotek. It is possible to see whole lines of noseless portraits. 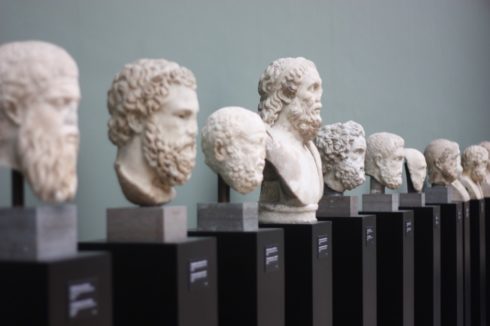 And it is this state of noselessness, that I have come to poke my own nose into. 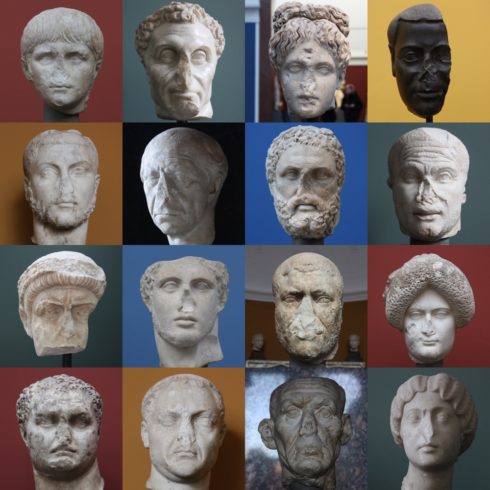 Restoration of antiquities is an ever evolving discipline. The rights and wrongs alter with vicissitudes of curatorial approach and the archeological record. Many of the faces in Glyptotek that do actually have a nose, are the result of restorations, of replacements that someone (often an important artist of their day) have made many many hundreds of years after the original was lost. At Glyptotek, the nosejobs that have survived are left ‘obviously’ stuck on, without attempting to disguise the fracture, in order that we can recognise that they are replacements. 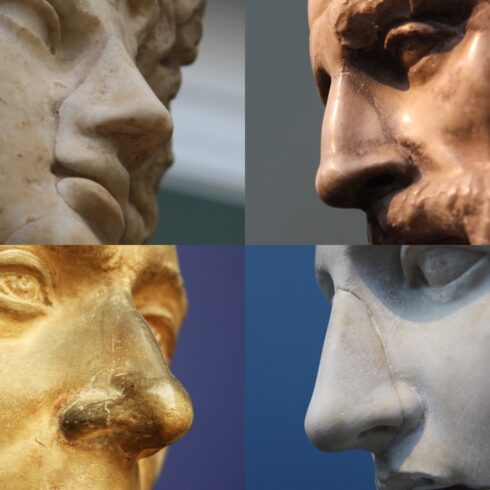 Up until the middle of the 20th Century the fashion was to restore ancient marbles. Complete pieces were considered more aesthetically pleasing, and were worth a lot more money. Arms, legs, and many noses, were carved as replacements. Ideas changed, and ‘authenticity’ at all costs, meant undoing a lot of the work of previous restoration teams.

At Glyptotek, one of restorers was instructed to remove the noses (several ears and a few locks of hair) from a range of busts. This he duly did, and he stuck up the noses he had removed to the wall of his workshop. Seeing this collection of disembodied appendages, the curator couldn’t resist putting them on display. And so the Nasotek entered the halls of Glyptotek. 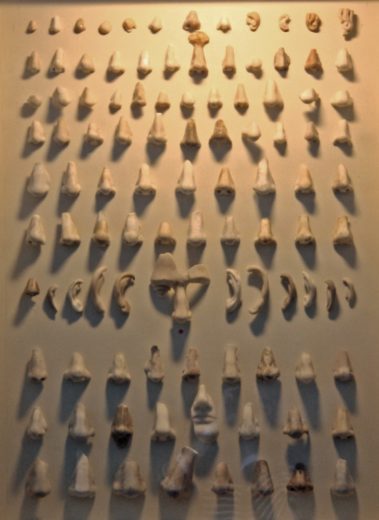 It is this case of noses that I am interested in thinking about. What is the status of this collection of disembodied noses? How were they picked? What might they do now that (like the nose that left the face of Collegiate Assessor Kovalyov in Gogol’s famous short story) they have left the face of their former masters? 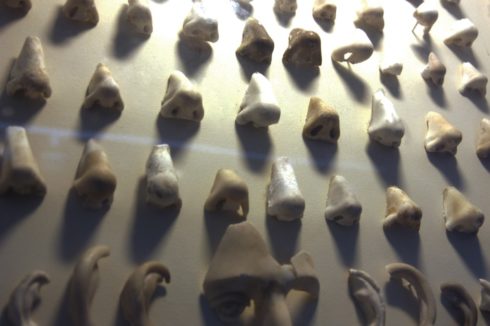 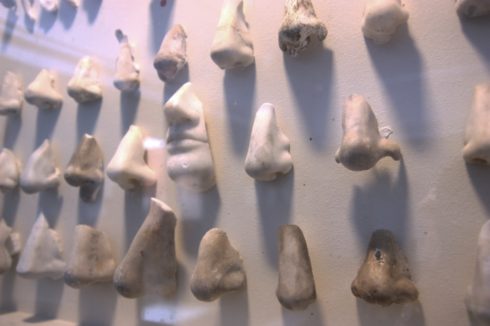 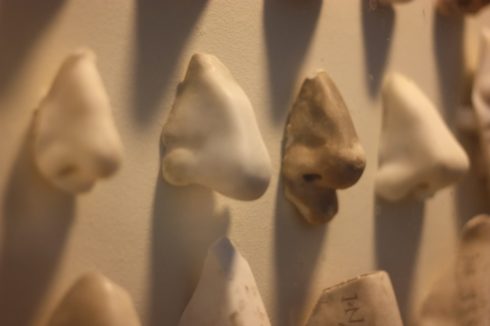 Exhibited on either side of the Nasotek are two busts of Emperor Commodus (161-192). The first shows him as a young man. Rust has severely effected the stone. It was caused by an iron pin that was used to secure a new nose. The nose has now been removed, but the damage from the rust cannot be corrected. A label underneath states: ‘Not suitable for exhibition.’ 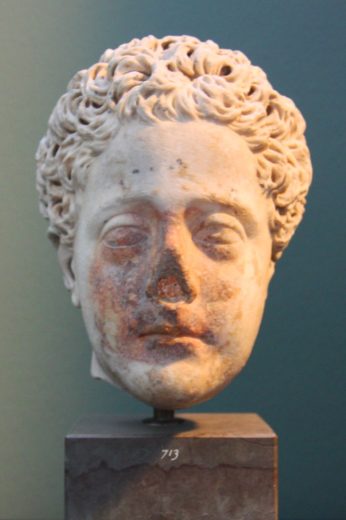 The other bust of Commodus has the whole front of the face sliced off. 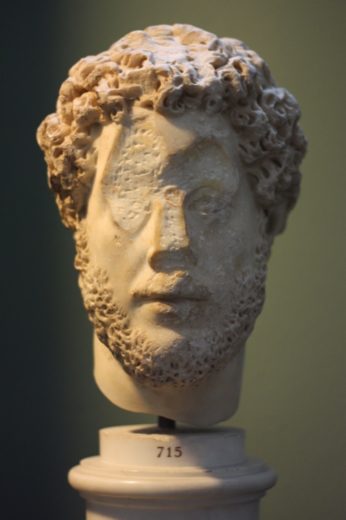 You can see the chisel marks where a restorer has dug into the ancient marble in order that the new prosthesis will adhere. It’s pretty disconcerting. 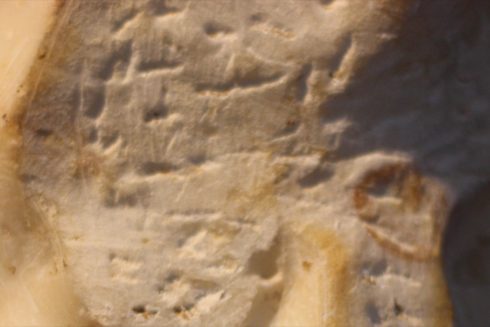 Again, the label under this one states that it is ‘…not worth exhibiting’. (I like this tension between showing and not showing and the obvious struggle that the curatorial team have had between aesthetics and education. I like very much that they have put these busts on plinths and then told you they are not worth exhibiting. I also want to say that these portraits of Commodus, with his rusty rosacea, or his flat chiselled face, are for me, somehow more aesthetically interesting than those where he is better preserved.)

In the centre of the Nasotek, about a meter or so away from the chiseled ruin, there is the nose, eye and forehead that a sculptor of the modern era created for the flat-faced Emperor. It has its own beauty and integrity. It has a life of its own. 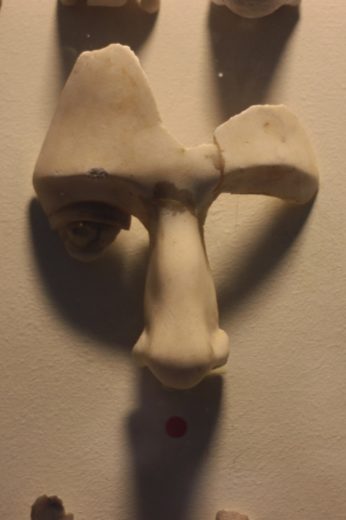