In autumn 2019 I shadowed officers who work for the ‘Regulated Industry’ team at the Environment Agency, based in Nottingham. The experience was part of the background research that went into ‘Regulated Exhibition’ which opened at Backlit Gallery earlier this month. This is the first of two posts to coincide with the exhibition, in which I journal something of the experience.

Regulated Industry are the bit of the Environment Agency that are responsible for checking that businesses do not harm the environment with industrial processes and operate within the law, specifically within their permits. 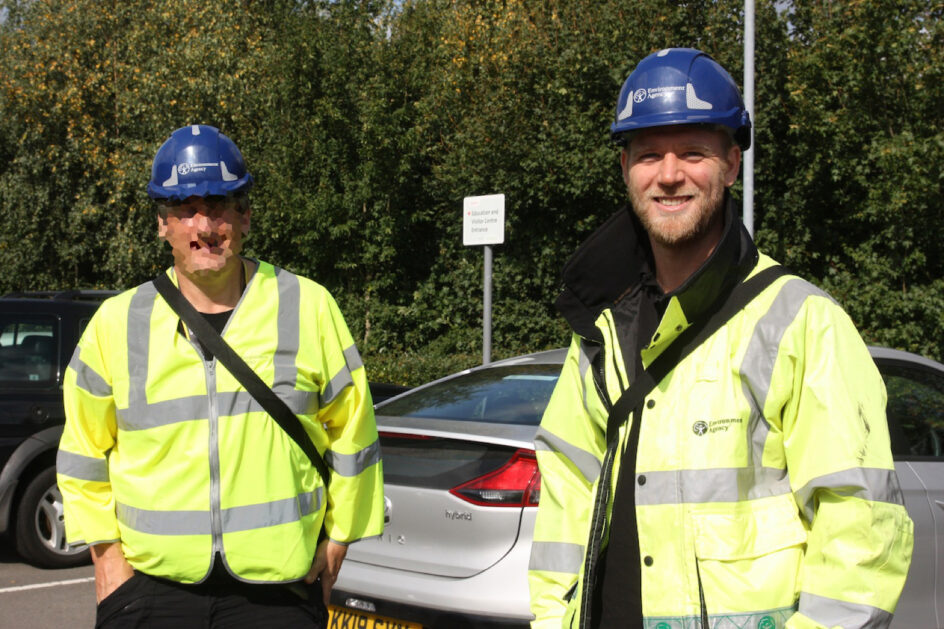 On this day, I shadowed Will and Nick as they visited 3 different sites: a materials recovery facility (MRF), plastics recycling factory, and a vehicle end of life workshop. (Yes, it’s really officially called, ‘end of life’.) No warning of the inspections are given but these are the industry good guys. No problems were expected.

Nevertheless announcing their arrival sets in motion a kind of theatre. Will presses the buzzer: “We are from the Environment Agency, here to make an inspection. Can we speak with the site manager?” Slight pause. Flustered response. “Oh, erm, yes, erm, of course. Just one moment!” I imagine a behind the scenes panic, like the moment the lookouts report back that the cops are about the raid the speakeasy, and the liquor is funnelled out through a secret passage. But my visions of polluting machinery being turned off, open vats of battery acid being rolled away, or yards being swept clean of fly ash particles, is probably entirely in my head. “There simply isn’t time for them to make any major adjustments in the minutes we wait in reception,” Will tells me, “and don’t forget that these are the businesses that have permits in place and on the whole want to do the right thing.”

The Environment Agency was a natural fit for Will. He knew he wanted to work with safeguarding the natural world. After studying geography and volunteering for environmental charities, he started at the EA.

Nick is a former cop. He worked as a detective for many years. He then took an opportunity to work with ex-offenders on environmental projects before moving sideways into his work as an Officer with the EA.

We drive around the East Midlands talking about the climate crisis, oceans full of plastic, and Extinction Rebellion. They both agree that they would like people to know that what they, the public, are doing, separating out their waste and disposing of it in the required way, is making a difference. It might be hard to imagine that cleaning out your can of beans before you toss it in the recycling bin really matters, but that becomes only too apparent when you follow that can’s onward journey.

Our first stop is a materials recovery facility. This is basically a centre that sorts domestic recycling and sends it on as material to be created into something else. We were given a tour by the Assistant Manager, who started as a driver and worked his way up. He is clearly very enthusiastic about his job and I had to remind myself that this was part of a formal inspection. 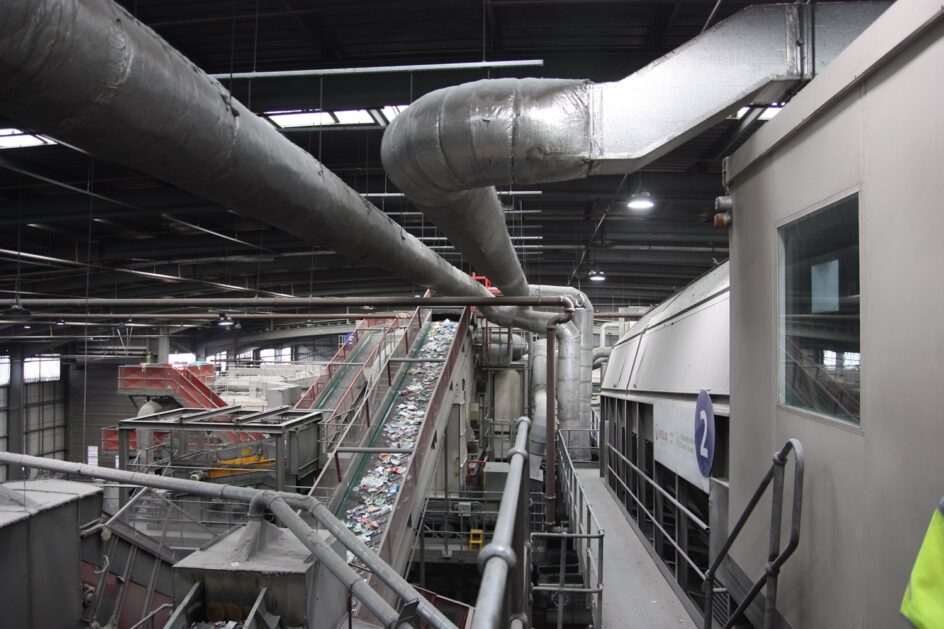 I have been to MRFs before, and is still gives me a kick to see the process of cardboard and cans, newspapers, and plastics, flying off the conveyor belt into their separate bins. On the occasion that we visited, the plant had been stopped for its fortnightly 9 hour clean. Workers have to manually cut out the plastic that has got caught in the machine mechanisms. The Assistant Manager comments that they haven’t seen so much difference in the amount of plastic clogging up their operation since the charging for single use shopping bags came into force, presumably because all their rubbish still arrives in plastic bin bags. There was something oddly poetic about the cleaning of the equipment that is required to sort the waste. 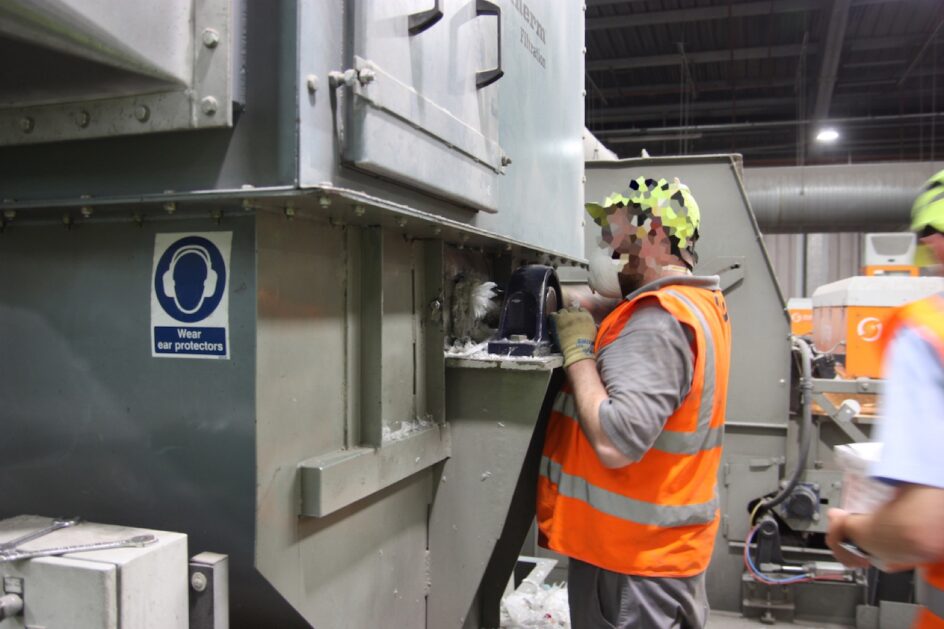 Although the process is largely mechanised, it is still human pickers who begin the process, staring at one patch of a conveyor belt for hours on end as your neighbour’s trash passes by, looking for things that won’t be picked up by the machines beyond. One of the regular hazards of this work is needlestick injuries. The ‘injury’ is, of course, not the impact of the needle itself but the possibility of infection from blood born diseases such as hepatitis and HIV. Apparently it’s a fairly regular occurrence that workers will have to get themselves to hospital for a check-up.

After assuring themselves that the hazardous wastes are stored correctly and gathering some associated paperwork, Will and Nick seem satisfied by their inspection. We head to a supermarket café, wash our hands, and have lunch.

Next stop is one of the largest recyclers of rigid and flexible plastics in the UK.

It’s a massive operation and one that the team we meet are clearly very proud of. They don’t deal with domestic waste but rather handle rejected industrial plastics for reprocessing. So if you are a plastic pipe manufacturer and you have a few tonnes of faulty plastic piping, this company will chip it and prepare it for a second moulding attempt.

There is a pretty heady smell of melting plastic in the air. Some of the Environment Agency staff have had their nose calibrated (who knew?) in order that they qualify to ascertain whether factory emitting smells are within permitted amounts. It’s a notoriously hard thing to measure. Permits specify that the levels must not exceed what trained EA staff consider acceptable; hardly a standard reference. Will and Nick don’t seem to bothered about the smell though.

Most of the plastics taken in are clean but sometimes they are used plastics that need to be washed. Washing tonnes of chipped plastics requires a sump and overflow mechanism. Will and Nick are concerned that plastic particles are not being contained adequately and could fly away, eventually to enter the watercourse. 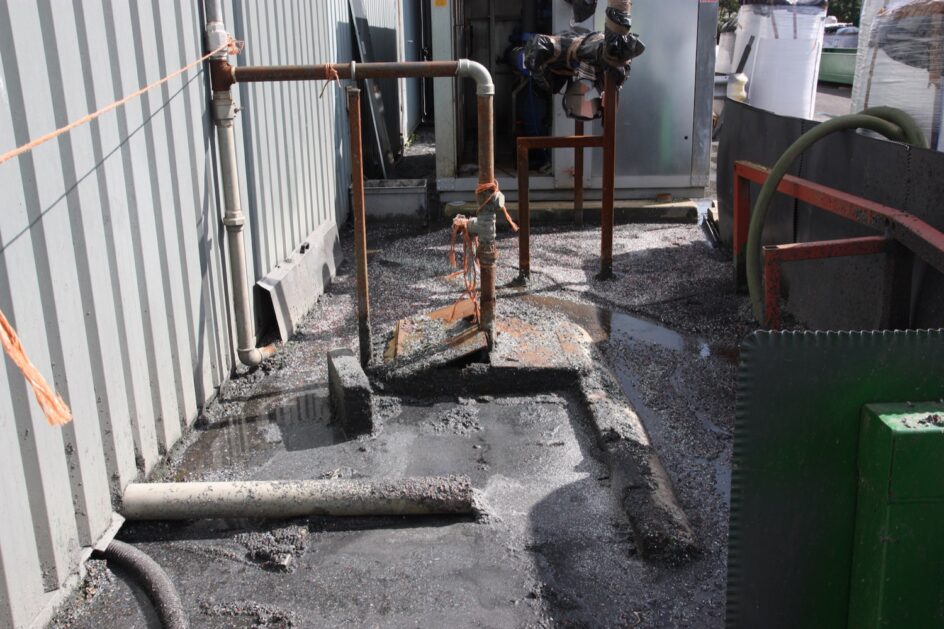 Nick has a rolling hills smooth jazz calmness to his voice. He issues warnings as if they are gifts. “What we are going to do for you…”, he says, “…is give you a little action around that.” It’s almost as if he were leading a meditation. “Let’s see if we can contain the space around that sump.” He delivers bad news in such a way that everyone in the room immediately relaxes.

The only time he raises his voice is to respond with an unshakeable “No!” offered a free roll of dog poop bags as we are leaving the facility. Environment Agency staff cannot accept gifts, no matter how small, from those they are inspecting.

We leave plastics for cars and a vehicle recycling company (“authorised treatment facility for end of life vehicles”). This is where cars come to die. Although it’s a small operation and only one worker on site for the inspection, this is the business most overtly dealing with hazardous substances: battery acids, break fluid, oils, diesel, petroleum etc. It’s a dirty business. But this breakers yard seems to have the necessary processes and storage facilities in place, and Will and Nick seem happy that all is in order. 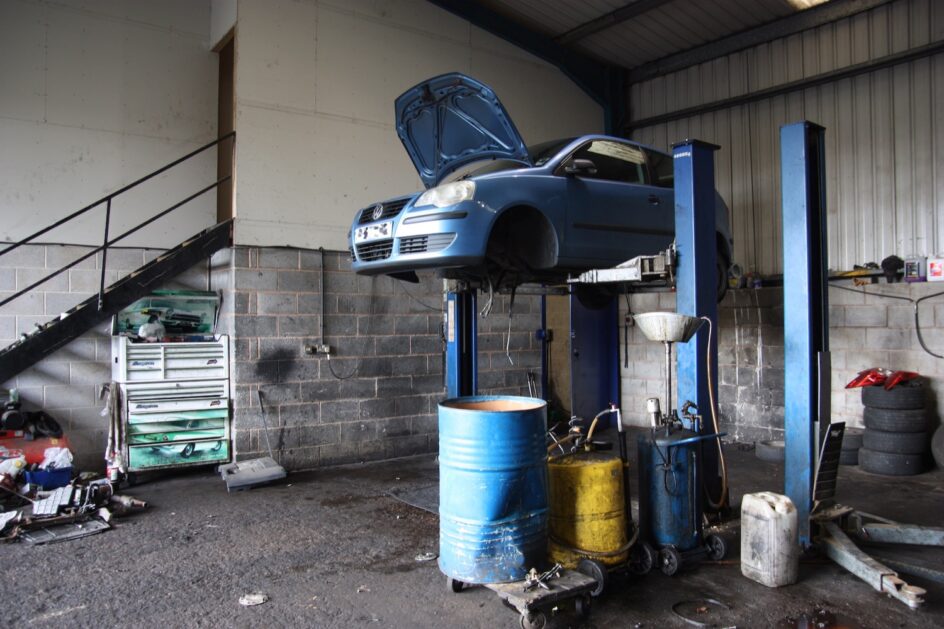 Although there was some gentle encouragement and even the odd formal action (for the flyaway plastic particles) generally speaking this day of inspections was reassuring. Rather than the behind the scenes panic that I had imagined, site managers were keen to talk with the EA about what they were doing. But the bad guys do exist. Illegal sites and fly tipping pose significant risks, as do breaches of permits. For that, I will make my second visit.