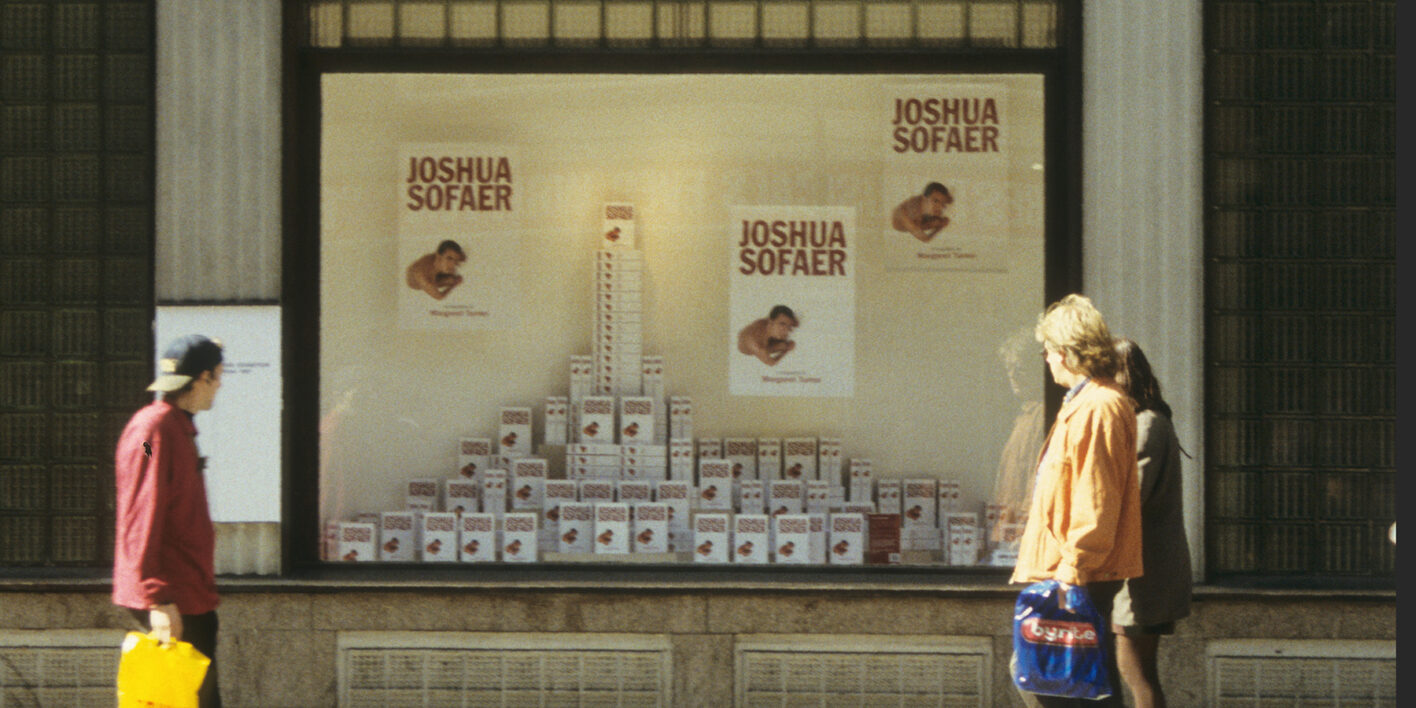 Under the auspices of an publishing company named, ‘OUTSMART’, Joshua Sofaer is producing a first edition of his biography. Titled, ‘Joshua Sofaer, a biography by M.Turner’, the book will be a thick volume. However, information on the social life and career achievements of this ‘entrancingly gifted young personality’ (back cover blurb) is in short supply. The book’s appearance, biography-like in every detail, will dissemble its own blank interior.

The blank book is, in many respects, a joke on a simple level. I remember another such object being passed round my own class at school. ‘Everything that boys know about girls’. As an adolescent, I didn’t quite get it from the title and had to be encouraged to have a flick through before realising myself as the target. Joshua confesses his relish at the idea of some of his childhood friends coming across his biography or finding an advertising flyer in the post. How has he done so well, and so quickly? As it is being described to me initially, I feel slightly anxious about the reaction that this level of apparent disrespect for an audience will produce. My anxiety stems from being unsure where to place the joke within the work. Who, exactly, is OUTSMART’S latest publication intended to outsmart? However, it is a cursory description of the project which makes the apparent prank of the unprinted book seem central. As it unfolds, the sites in which the work operates multiply and the simpler characterising of the work is, to some extent, confounded.

Within the audience for this event, there are distinct levels of involvement. First of all, those of us amongst the assembled mass of ‘book enthusiasts’, who have been planted as impostors with questions. Also included at this level are; a photographer who seems to be more interested in taking pictures of the audience than of the ‘famous writer’ present; the manager from Books etc who introduces the speaker; and the speaker herself who is, it occurs to me, also amongst the audience at this event.

The idea of Margaret Turner, biographer, as a kind of decoy at the centre of the performance, is one which may also be apparent at the next ‘audience level’. This group is comprised of those who have seen Joshua Sofaer perform previously in various clubs and art venues. They’ve come because something is going to take place, but suspect that the time and place on the invitation card are the only trustworthy pieces of information which have been provided. At the next level, one or two curious individuals have arrived in response to an advert placed in Time Out. These people don’t know who Joshua Sofaer is but feel from the tone of the advert that they ought to. Further down the line, a smattering of book buyers who just happened to be in the shop at the time have been drawn over by the sight of a seated audience and film crew (the Big Breakfast have just arrived). On the periphery, another audience level made up of shoppers carry on with their browsing whilst being careful to remain within ear shot.

Trying to disguise my involvement, I’ve found what I imagine to be a fairly insignificant seat somewhere in the middle. After an introduction in which the author’s forthcoming engagements are listed; lectures, trips abroad and the like, Margaret Turner begins her address. She is, she claims, surprised and flattered by the turnout. (Books etc. do seem to have underestimated the number of chairs required, with listeners standing three-deep behind the seated audience). Predictably, it is not long before our author is singing the praises of the youthful Joshua Sofaer. ‘He’s been so helpful during the writing of this biography’, ‘having time to speak to me irrespective of his busy schedule’. Margaret muses about the problems she has encountered in finding a suitable title for such an important piece of writing. ‘Given the trials of Joshua Sofaer’s early years, I was considering The Outsider, but that’s already been done’. She takes the opportunity to advertise one of her previous publications, ‘Enter a Stranger’. At this point in the proceedings, I confess that I betrayed my ‘first level’ involvement of the event – I laughed at what I took to be a double-entendre of Joshua’s rather than the speaker’s own design. I have since learned that Angela Vale, the actress hired to play Margaret Turner for the evening, did write a book of this name some years previously. The method of practical joke construction which seemed too straightforward and so, problematical earlier, becomes more convincing. The leakage of one voice through another, which is barely discernible at first (Joshua’s absence/presence at the ‘performance event’) becomes apparent and then assumed. The text of Margaret Turner’s address is a curious mixture of absurdity and accurate information. It is a pleasant surprise to find that this trickery doesn’t turn back on the audience in the form of some subtle humiliation. Instead, what becomes apparent is a kind of rotating confusion where all conception of the identities involved collapses. The empty book starts to signify this zero point. The quagmire of identity-confusion becomes a kind of clean slate. ‘Joshua Sofaer – a biography’ is a piece of work in which the audience – at its various levels, is one set of mechanisms in the work’s construction. The work itself may seem to be always directed elsewhere – towards some truer, more ideal viewing public, but it is precisely the futility of this gesture which makes the initiator the final butt of the humour. Joshua outsmarts himself – leaving the rest of us free to puzzle over the spectacle.

Following the launch, a new display of the book will be installed in The Window Gallery at Central Saint Martins College of Art – directly opposite the book shop. The ‘window installation space’ is another context, and one which will perhaps offers all viewers a more immediate access to the full nature of the project. Unlike their presence in the book shop window, the new display will produce an absurdity in relation to its site and so the work’s functioning begins to rely less on the presence of an excluded section of the audience.

At the end, I queue up along with everyone else to get my signed copy. This launch, I’m told, is one of the most successful which Books Etc. have had for some time. Margaret Turner’s biography moves, astonishingly, to a position above ‘Diana – a tribute’ in the best-seller list. As she hands the book over, our supposed author, Angela Vale, gives me a slightly ambiguous smile. I can’t decide whether this is the confused and pleading look of someone who is out of their depth, (‘Do you know what this is all about?. Is it over yet?) or just her way of identifying with a co-conspirator. My enjoyment of the event’s multiplying confusions makes me reluctant to decide either way.

As promised, the biography is devoid of textual content – except, that is, for the signature of Margaret Turner (whoever she may be), and for one printed inside cover page. This has the usual official stuff; ‘All rights reserved. No part of this publication may be reproduced or transmitted in any form or by any means, electrical, mechanical etc.’ I find myself wondering if Joshua Sofaer could have successfully made himself the legal owner of the blank page. Maybe the next step for the artist will be to attempt to pursue a legal case in defence of the rights for Margaret Turner’s blank pages. Be careful sending a fax, or use the photocopier from now on. When you ‘reproduce’, or ‘electrically transmit’ any text, putting the page in back to front could result in a breach of copyright.