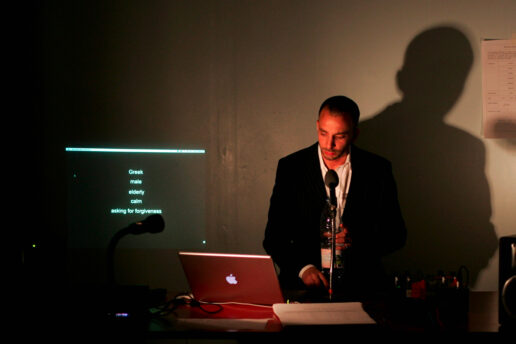 For a period of up to three hours, characters are improvised from a list of categories randomly supplied by a computer software package. The performance is constituted as a series of tasks and challenges to the performer. The audience are free to come and go as they please. There are 24,192 possible formations that Monologue Machine can offer but no one knows which it will select.

As well as instructing the performer as to the gender, age, emotion and content of the improvisation, Monologue Machine also proscribes the language from the list: American, Arabic, English, French, German, Greek, Hindi, Italian, Japanese, Mandarin, Russian, and Spanish. Just like the characters themselves, the languages are fake.

Monologue Machine addresses the role of language in trans-national relations, the perception of cultural stereotypes and the adaptability or virtuosity of the performer.

Realised with support from the British Council.