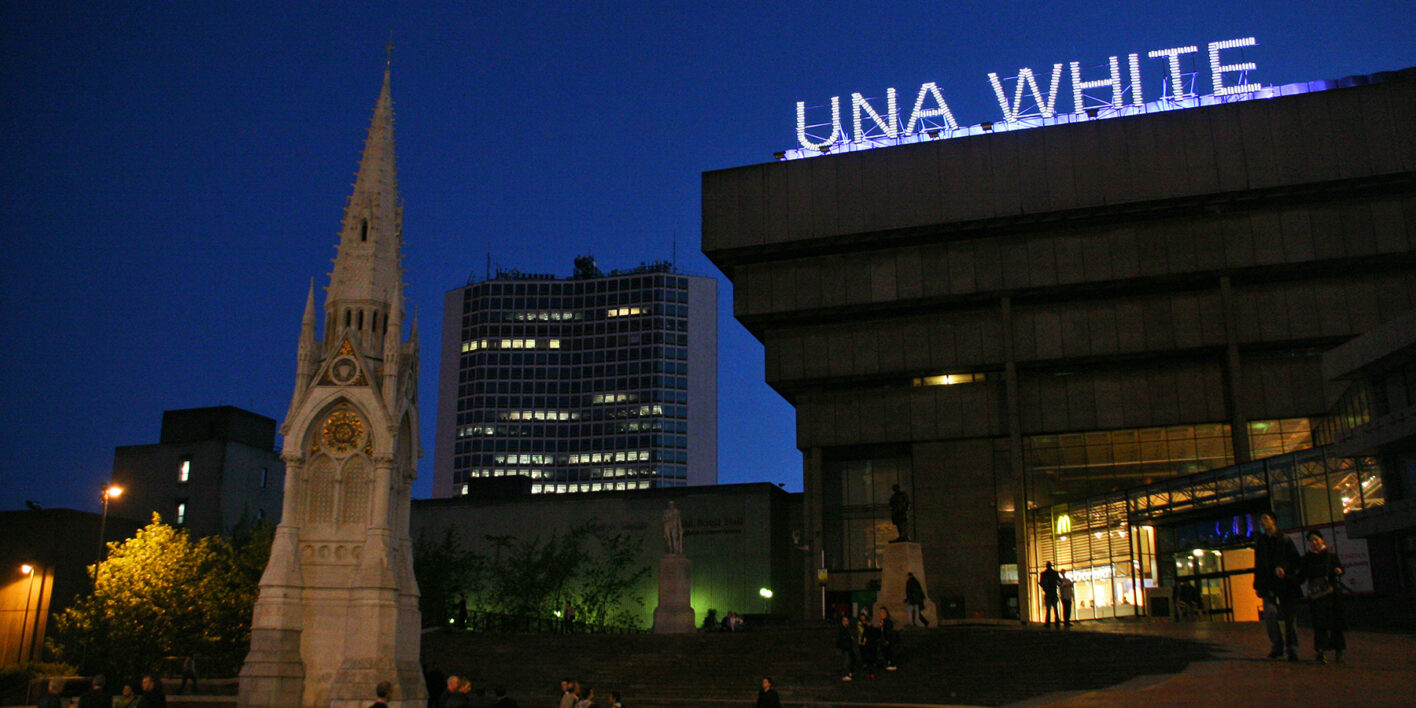 Elvis Presley. Nelson Mandela. Posh and Becks. When is a name more than a person? When does a person deserve A Name?

Name in Lights was a national competition with a glittering prize: the name of your choice spelt out in a giant illuminated sign in the centre of Birmingham. In a format familiar from TV talent shows, thousands of nominations were submitted from up and down the country and judged by a panel of experts. These experts all depend on celebrity for their livelihoods, so they were well poised to pick a new one.

The prize itself is the ultimate symbol of fame. To see your name in lights is the stuff of a million Hollywood dreams; it’s big, brash, visible and public, an unmissable symbol of Somebody Important.

But the range of entries shows that not everyone agrees on what makes someone deserving of this prize. Nominations ranged from famous figures, praised for past good deeds, to everyday people who simply like the way their name looks or sounds.

In the end, the judges didn’t pick a wannabe star. They chose someone who isn’t already famous and who never asked to be.

It serves as a reminder that fame isn’t an essential quality. No one is born ‘a star’; stars are made by their audience. In this case, the audience will gaze up at the sign and wonder what it means. Because, although Name in Lights seems to represent all the characteristics of fame, it stops short of the reality TV show, magazine interviews, paparazzi shots or perfume deal that are so much a part of contemporary celebrity.

Compared to other celebrities we know about, we know very little about this one. Perhaps, then, this isn’t really fame at all, and maybe that is the point. Now that the name is up in lights in a public space it’s up to us to decide what to make of it. Name in Lights removes the mundane surety of the endless mechanism of celebrity, and does something magical: it puts the mystery back into fame.

Name in Lights was a Fierce Festival commission produced by Mark Ball.

My beautiful mother displayed strength and determination depicted in her journey through the 1960’s from Jamaica to England. She represented, cultivated and encapsulated the spirit of life in her heart and this conveyed to other people of all ages and races. She was very altruistic in her nature and for over 30 years worked as a devoted nurse caring for the sick and the severely mentally disabled.

It would therefore be very apt that 10 years after her death that her name should have the opportunity to light the skylines of Birmingham and would be the epitome of hope, faith, overcoming adversity, effervescent and cultural unity.

My mother was a role model to her daughters and her grandchildren too. Her sprit and faith lives on within us and the memories of her beautiful smile continue to shine everlasting in our personal journeys and her lasting footprint continues to guide us.