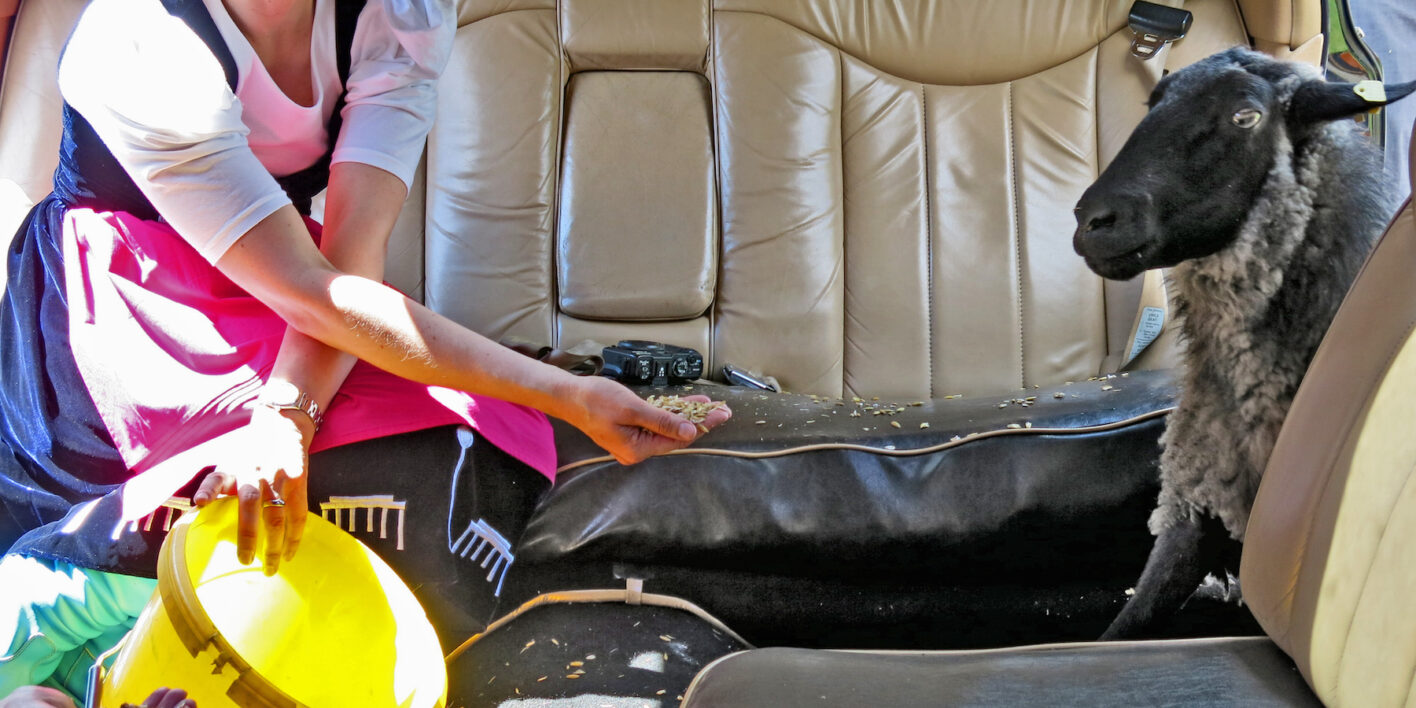 On Friday 12th July 2013 at 8.15 p.m. a fabulous stretch Lincoln, built in California and abandoned in Dubai, was driven off the stage by a member of the audience at the Berliner Festspiele, beginning its new life. This was the culmination of our investigation into improbability.

From 29th June to the 7th July we ran a series of test-drives. We were looking for proposals of what to do with the car that stretched probability: unlikely, implausible, incredible ideas that would give the car a new use and a new future.

Why did we do this?
Over the last five years, many luxury limousines have been abandoned in the desert close to Dubai airport. They are gathering dust. At the threat of bankruptcy, their owners have fled. During the last five years all kinds of improbable events have taken place: mighty institutions have fallen, millions of people have called for change. In Berlin, in central Europe, nothing much has altered: no new chances, no redistribution of wealth, no rethought rules. What maintains the regime of probability, the status quo that persists to govern the everyday? geheimagentur and Joshua Sofaer brought one of the discarded limousines from Dubai to Berlin, to turn this leftover of failed capitalism into an improbability drive. Citizens and visitors were invited to take a ride and create a new, improbable, future.

We conducted a number of test-drives selected from public applications. We assessed and measured the improbable situations that arose from suggestions.

The Test-drives
1. Recycling
For our first test-drive, we took a group of strangers into the car, all of whom had something to test. The only one who could seriously undertake responsibility for the future of the car was Jose Sanchez Balboa, who wanted to use the car as bottle recycling vehicle to forefront issues of sustainability. We drove through the night and met with both drinkers and bottle collectors.

2. Familie Schlippenbach
What we liked about the Familie Schlippenbach was that each member of the family made a proposal. After a very successful test of Jacob’s idea to see the car pulled through the streets by a member of a petrochemical company, the family wanted to test the use of the car as a ‘culturemobile’ which would take non-art audiences to art and culture events. We tested the idea by arranging a concert, picking up a stranger, and taking her to it.

3. Chasing Sheep
Rike Feurstein designs and makes hats and is concerned with sourcing her materials from origin point. As such she wants to raise the sheep that she will gather wool from. The ‘red headed’ sheep are an endangered species and there is no male population in Berlin. Rike wanted to test the possibility of using the limousine as a sheep transporter, with the idea of traveling over the Pyrenees to collect a male sheep and bringing it back to Berlin in style.

4. Bankrupt
We met Dominic Shulz in Cafe Bankrupt. He was homeless and sleeping in the park. We offered the limousine at his service for the day. We travelled around collecting Dominic’s papers and proof of identity so that he could go to the Job Centre and register. We then visited his mother (who happened to work in another job centre). Dominic said if he was to be given the car, he would sell it for the money. We went to car salesmen to see what it was worth.

5. Demobile
Margarita, Jasmin and Jana wanted to use the limousine as a ‘demobile’ that would be driven out for protests in the city. We engineered a protest to test the idea. This was probably the smallest protest ever in Berlin, which nevertheless necessitated outriders, police vans, the re-routing of busses, and the halting of traffic. What we discovered was that having a limousine goes a long way with those in authority.

6. Shrink Limousine
In a world where we are encouraged to technologically ‘progress’, Agnes Fabich was interested in thinking about the difficulty of regressing, or undoing what has been done. She proposed to shrink the stretch limousine back to it’s original town car proportions. To help us on the quest we invited Georg Lesz, who is a shrink. We experimented with different methods of shrinking including seeing how many people we could fit into the car.

7. Citizen’s Drive
Christine Ebeling wanted to use the car as a mobile diplomatic space where citizens could converse with politicians while they were on the way to their next engagement. We spent the day trying to get a politician into the car. As might be expected (highly probable) it was extremely difficult to even get hold of a politician, let alone persuade one to take a ride with us and the various community groups we had on board.

8. Lift
A group of students proposed a number of different possible test-drives. One that could be tested immediately, was to carry the car through the city as a kind of protest against the priority given to gas guzzling vehicles. We attempted to lift the car. It seemed to rise up a little bit but we didn’t get very far. Despite that, everyone seemed to be very pleased with the attempt.

9. Breakdown
Jacob proposed that he would take all of us surfing in Portugal, Markus and Gitta proposed driving the car to the top of Mount Kilimanjaro, and Olli proposed leaving the car on the moon and remote controlling it from the earth. We thought we would test all these ideas together in a long road trip to Havelland. Unfortunately a few kilometres outside Berlin, we broke down. We weren’t sure if this was probable or improbable.

The Decision
After the test-drives, we compiled our research into a lecture performance and gave the public audience the opportunity to vote for which improbable future the car should have. They selected ‘Chasing Sheep’.