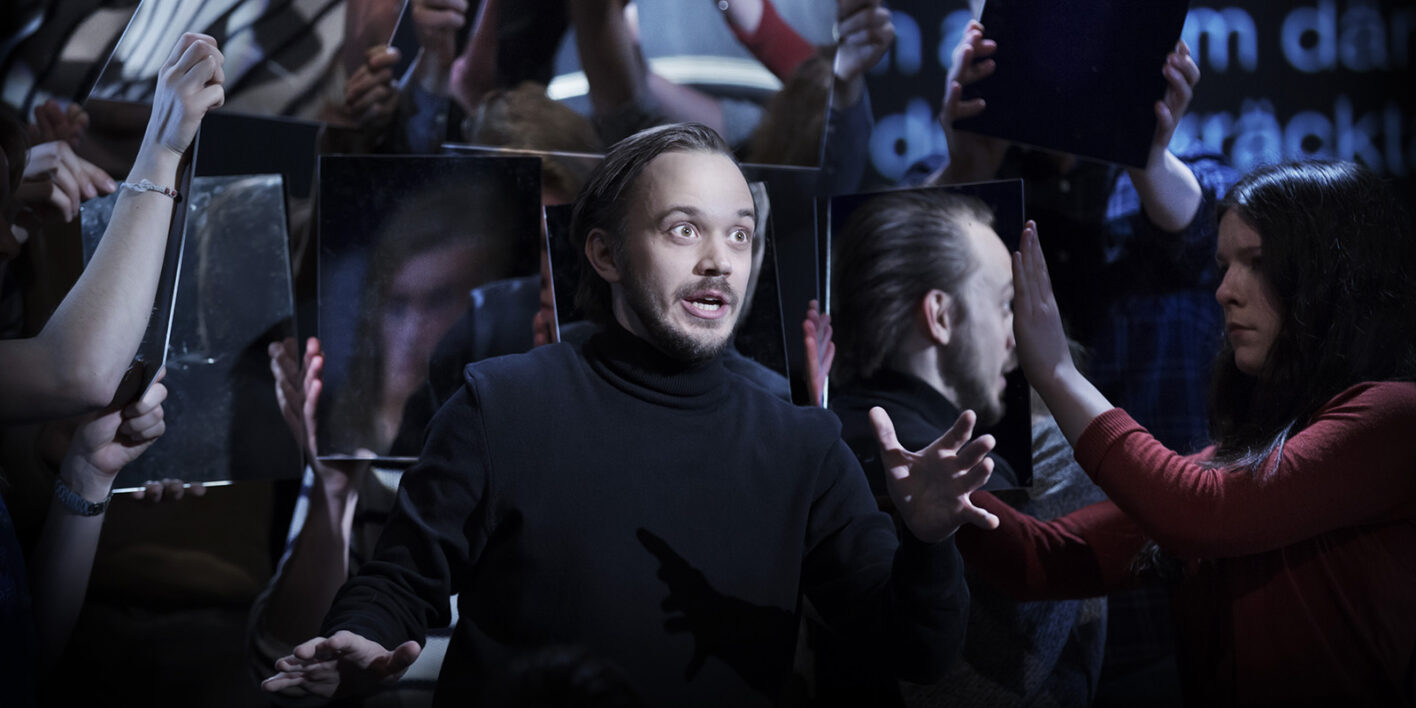 Bach wrote St Matthew Passion in 1727 when he was cantor at St Thomas church in Leipzig. His intention was to create a plain speaking, easy to understand work, which moved worshippers to a reverential state as part of the church service. It was of key importance that it should be performed in German – the language of the people – as opposed to the Latin that was normally used for sacred works. Bach placed greater importance on the accurate presentation of meaning than on aesthetics. He wanted his audience to understand.

In current productions, even when performed in churches, the emphasis is on musical entertainment, especially for non-German speaking audiences.

Folkoperan’s St Matthew Passion looks back towards Bach’s original intentions at the same time as moving meaning forward to have relevance to contemporary secular society, as well as those with religious belief. The story of the cruelty, suffering, forgiveness and salvation that is told in the Passion, is ultimately one of how we as humans, treat and relate to each other. By telling our personal stories we share our burden, and at the same time we allow others to take strength from our experience.

In this production the recitative which carries the biblical text has been replaced by filmed interviews that are projected on a screen which covers the wall behind the stage. In the interviews, singers and musicians share personal stories which concern the big themes of the passion: forgiveness, guilt, pain, fear, loneliness, and love.

The staging is kept simple, with the ensemble, including the orchestra, on stage all the time. As one body of people, they act as collective witnesses, with soloists emerging from the amongst them in a series of tableaux.

FORGIVENESS
Flautist Åsa Karlberg talks of how she was overcome by feelings of guilt for letting her son down. The forgiveness that he offered her has strengthened their relationship. “It could have been something that dogged me for life, that I could be accused of all my life. But he chose not to do that.”

GUILT
Amanda Dahl is an alto with the Hägerstens Youth Choir. As part of her formal education she went on a study trip to Uganda. What she discovered there filled her with guilt at her own privilege and a desire to effect change. She was however paralysed by the idea that she was only acting to appease her own sense of guilt. “You get so scared of doing wrong that you end up doing nothing.”

PAIN
Alto Janna Vettergren had longed for a child. After years of trying naturally she and her partner decided on a course of IVF and after several cycles, eventually conceived. As Janna tells us her story we watch the last moments of her pregnancy in the maternity unit and the birth of her son.

FEAR
Katarina Henryson is one of the founder members of The Real Group. She shares the story of her fear when she thought that her young son would die and the difficulty she had in trying to make sense of what was happening. “You try to find an explanation. And there isn’t one.”

LONELINESS
Baritone Morten Vinther tells of how he stepped from studying a cappella singing in Copenhagen straight into his ideal job as a member of The Real Group. What he discovered is that the this new life also meant sacrificing being close to the people he loved most and that he was stuck in the loneliness of the “artist cliché”.

LOVE
Soprano Hannah Holgersson reveals the issues she has had with ‘control’ since adolescence and what happened when she felt her world was falling apart. Ultimately her story is that of the love and support from her partner. “In some way it’s an encouragement to have the courage to be vulnerable and exposed to someone because that’s where the truest human interactions occur.”