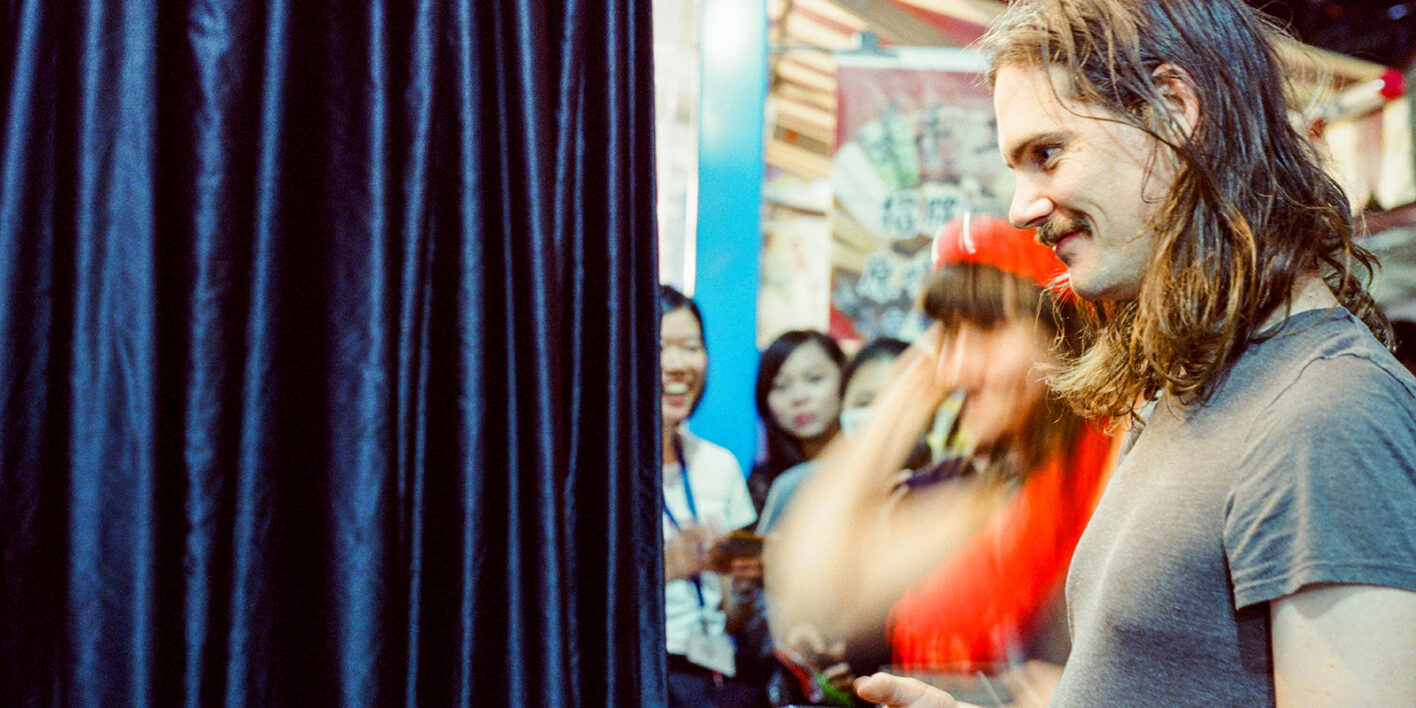 Night Market Theatre took one of the stalls used for serving food in Zhiqiang Night Market in Hualien, Taiwan and adapted it to serve bite-sized performance to the regular visitors.

Night Markets are a part of everyday life across Asia and especially in Taiwan. They are social spaces in which people graze the stalls, eating their fill of inexpensive and delicious food. During a 3 week devising process, 8 Taiwanese performers developed short performances lasting between 30 seconds and 5 minutes. A menu was printed and the theatre opened to the paying public. Performances cost anything from 1 to 1,000 Taiwan dollars (2p-£20). The menu of performances was divided into 5 sections:

There is something very seductive about strolling through the Taiwanese night markets looking at the different foods and thinking about what one wants to taste next. The traditional mobile stalls specialise in just one type of food. Each of these stalls is like a miniature mobile theatre. Behind the façade, the stallholders create their own kind of dramatic experience as you watch their finely honed techniques before they present you with their particular dish.

For Night Market Theatre, we created our own menu. While eating your ‘rice bun hotdog’ or ‘fried squid’ you were also able to order a personal story, a quirky song, or a magic trick with a difference.

Night Market Theatre capitalises on the traditional social activity of strolling through the alleys of food stalls and offers people entertainment for their soul alongside the food for their stomach. Contemporary performance practice has been marked by a desire to leave the confines of a dedicated theatre and to make the work directly with the people as part of their daily lives. Of course there is also a strong tradition of street theatre, especially across Asia, that takes performance directly to the people. In Night Market Theatre we combined tradition and innovation by bringing something unexpected to the visitors of Zhiqiang Night Market.

Night Market Theatre was conceived and staged by Joshua Sofaer.

It was commissioned and produced by Prototype Paradise.
Co-curators: Yoyo Kung, Juan Chin

Night Market Theatre is a real stall in the night market. Curated by Yoyo Kung and Juan Chin of Prototype Paradise who collaborated with UK artist Joshua Sofaer as artistic director, Night Market Theatre juxtaposes art and business as contemporary performance practice. It borrows the format of night market trading: the stall, the façade, the menu, and the queuing system, and is located in the Zhiqiang night market in Hualien, Taiwan.

Artists have become the stallholders serving performances which you can’t quite take out or eat in but are nevertheless made for you in real time as you savor and experience them. With a sign that reads ‘Night Market Theatre’, the design of the stand attracts the general public. The conventional stall from which food would be provided to customers has been transformed into a miniature stage. The sense of drama has been heightened by two layers of black curtains, in what looks like the styling of a traditional Taiwanese puppet theatre. This theatrical stall in a jungle of food booths becomes a spectacle, and makes people aware that something interesting and out of the ordinary might happen.

The performance begins. People congregate around the booth discussing the 35 dishes with unusual titles made by 8 artists, such as ‘Eat Your Sorrow’, ‘Bitchy, and ‘Sissy gets you high’. People are startled when a woman orders the performance ‘The Emperor is Coming’. A performer hands her a handmade traditional Chinese crown, then hits a gong and shouts: ‘The emperor is coming!’. Out of nowhere, the entire company gather round the audience member, kneeling down around her and shouting ‘A thousand blessings upon your majesty’. The performer hints that perhaps the audience-emperor should give the order for her ministers to stand. She does so and her assembled subjects fade away. The woman is embarrassed and amused. People clap and laugh and instantly get the concept of this dish and what Night Market Theatre is about.

Performances are delivered one after the other over the coming hours, while the audience busy themselves cheering, taking photos, filming and laughing, in the air filled with the smell of BBQ and fried chicken. The enjoyable atmosphere reminded me of traditional open-air Taiwanese opera or puppet performance although I could sense that what Night Market Theatre was doing was different. Some questions came to mind. Why is it necessary to be in a night market? Is it a sort of environmental theatre*? How is it different from street theatre? What would happen if we changed the location to a creative market? How can we view Night Market Theatre as site-specific art?

Let us examine how Night Market Theatre functions. Performers as stallholders stand by the counter and take the orders from the audience, giving them a numbered queuing card. Performers may introduce and recommend some dishes to you but still you have no idea about what you are going to get. You have to wait after ordering until your number is called. You go to the frame of the stall, the curtain opens, and now you get to see who is the artist/stallholder/chef for you. You pay. The artist presents a performance for you, the duration of which could range from 30 seconds to 5 minutes. The dish here is a participatory one-to-one performance aiming to create a personal, sensory and intimate experience. Not only is the audience member expected to interact with the artist but also to complete the performance with their collaboration. Sometimes the outer curtain is shut and sometimes it is open. This brilliantly transforms the area from an intimate private space to a border space somewhere between private and public. Then there is an opportunity for people to watch at a distance.

In terms of the artistic strategies here, the ‘general public’ who go to the night market is conceived as the target audience that every performer tries to work with. The approach of Night Market Theatre has left behind the stereotyped language of traditional theatre. Artists take social interactions in daily life, such as telling a story, singing, dancing, party games, fortune telling, and massage as a point of departure to devise their performances, which aim to be accessible to everybody. Building up performances within the social context of ordinary night market life was the aim. It was fitting then, that the duration and price of performances were ‘bite-sized’, and the costumes and props handmade, and low tech. These devices combine to reveal an understanding that Night Market Theatre revolves around the night market as a specific site, rather than the space of a black box.

Interestingly, artists as stallholders sell their own bodies as an art meal. They use their bodies to create performance in which there coexist many possible meanings. They invite the audience to participate with their bodies too, creating an interactive process that refers to the state of social relationships in daily life. If strolling in a night market to buy and eat food is the social life-style in Taiwan (or in Asia more generally) from the outsider Joshua Sofaer’s view, then from concept to practice, we can see Night Market Theatre as an art intervention in civic culture that has brilliantly engaged artists and audiences to re-experience the social interaction as contemporary performance. It leads us to rethink how art is something that comes from, and is part of, our everyday life.

Theatre makers have been trying to leave the black box. Audience development and marketing strategies have become trendy ways of trying to get attention. It seems Night Market Theatre has managed to inadvertently generate and realise the campaign slogan: The whole city is a theatre. It has successfully integrated site-specific audience participation and social interaction. As participatory performance practice in a local neighbourhood, Night Market Theatre is a remarkable cross-cultural collaboration.

*Environmental theatre is a branch of the New Theatre movement of the 1960s that aimed to heighten audience awareness of theatre by eliminating the distinction between the audience’s and the actors’ space.