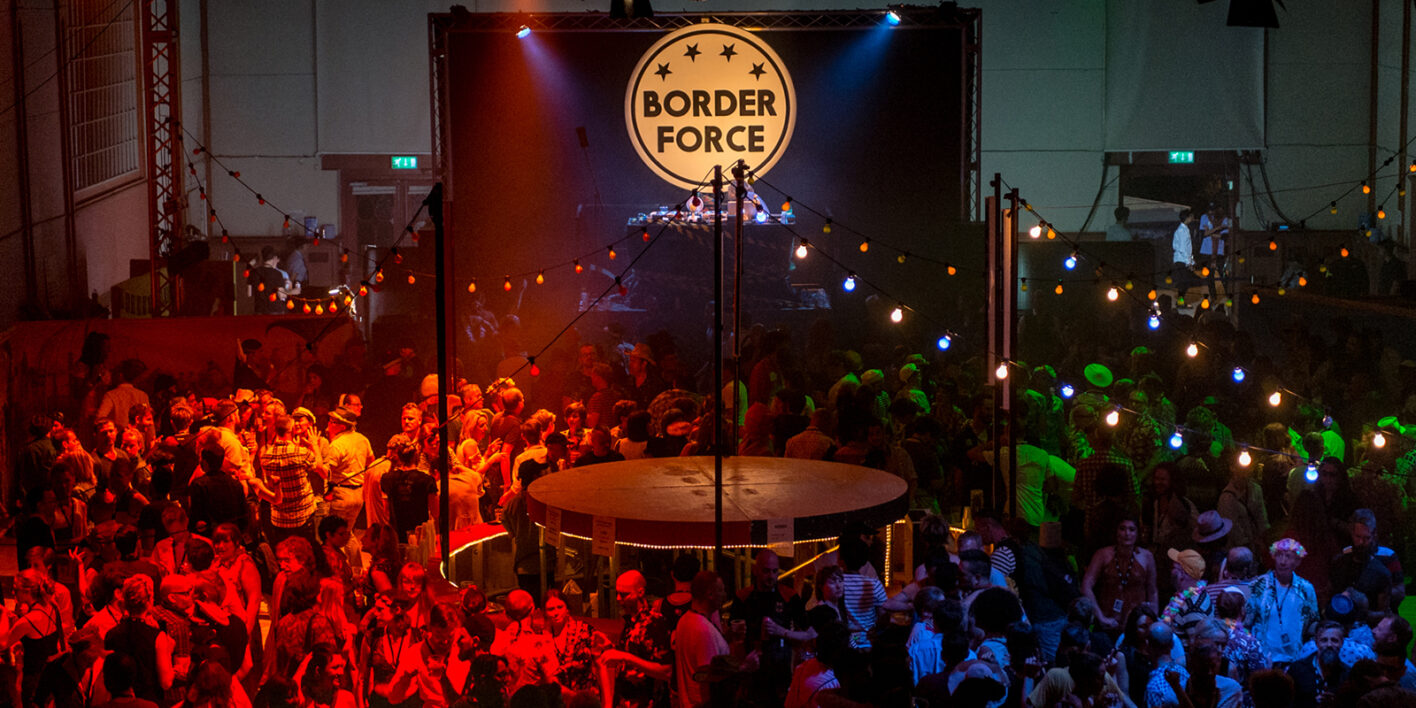 Border Force is a geo-political-immersive-disko

Join Duckie in a globalised clubland where we confront xenophobia, challenge the drag of national identity and promote freedom of movement.

Get your Duckie Passport and visit…

To get a visa to ‘India’ – pass a spelling bee contest
then drink lassi and kingfisher, taste tarka dhal and poppadoms, watch kathak and enjoy bollywood starlets

To get a visa to ‘Russia’ – ride on a horse barechested like Putin
then drink vodka and baltika, taste smoked salmon blinis, watch oligarchs ski-ing and admire the finest ballet

To get a visa to ‘Brazil’ – have a Brazilian
then drink caipirinhas and brahmas, taste tropical fruit salad, watch samba-de-gafieira and play football on the beach

If you have a UK passport, you can be considered lucky. UK nationals have freedom of movement to 174 countries and territories (89% of the countries of the world), ranking the British passport 1st (tied with Finnish, German, Swedish and the US). By comparison, having an Afghanistan passport gives you free access to just 28.

Passports, like the borders that they are used to police, are human inventions.

For one night Duckie restricted the movement of its club punters in a playful but thought provoking experiment which sought to question the automatic assumption that borders are necessary for the safety and security of nation states.

Freedom of movement is an issue that pertains especially to LGBTQI individuals and communities, in a world where it is illegal to be gay in 76 countries. Even countries that do not outlaw homosexuality have discriminatory legislation in place.

Duckie don’t have the answers but we don’t want to shy away from asking the questions either. Is there a different possibility to the nation state?

The four countries in ‘Border Force’ are Brazil, Russia, India, and China. The BRIC economies, also called the ‘Big Four’, are representative of the apparent shift in global economic power away from the developed G7 economies towards the developing world. In 2010, however, while the four BRIC countries accounted for over a quarter of the world’s land area and more than 40% of the world’s population, they accounted for only one-quarter of the world gross national income.

The holding form of Duckie’s ‘Border Force’ is not reliant on these specific countries; we could have chosen others. However, if money is power, and if the BRIC economies do overtake the G7 there will be a global rebalancing of control and influence. The privileges currently accorded to UK passport holders may no longer carry the same weight. Put simply, they might be the countries we would prefer to live in. Economic migration may well take on a whole new direction.

In the Duckie clubland we are not hoping to do justice to the complexities of the countries represented. Each country name is firmly in inverted commas. While reducing historical, geographical and social realities to the ‘tourist snapshot’ or the ‘Sunday newspaper photo-spread’ we want to press the idea that national identity, like gender, is a kind of ‘drag’. We perform our nationhood.

This may be especially true in countries where there are restrictions on LGBTQI personal expression and where love is policed. Brazil may have legalized same sex marriage and put anti-discrimination laws in place but it is still the most dangerous place on Earth to be transgendered. Last year 113 trans people were murdered, half of all reported cases worldwide. Russia’s notorious anti-gay ‘propaganda’ law has further institutionalised hatred of LGBTQI people, with permits for Pride parades banned, activists intimidated and arrested, and violent attacks ignored. Although ancient Indian culture offers many examples of same sex love and, for example, the veneration of transgendered gods, homosexuality in India was criminalised (under British rule) in the 1860s. The law may not be enforced and India has seen a smattering of same sex weddings but there is no legislation in place to protect LGBTQI rights. The ‘Gay Happiness Index’ which measured acceptance of same-sex relationships in 127 countries of the world, put China 63rd, just above the halfway point. (The UK is 23rd, Brazil is 39th, India 81st, and Russia 89th.) China’s abuses of human rights have been subject to international scrutiny, but with increasing economic power, so too, it would seem, comes movement towards freedom of expression. Rights afforded to LGBTQI people in China may well act as a barometer for those rights across the world.

There is plenty to celebrate as countries across the world recognise same sex relationships. At the same time there is still much further to go before equality is achieved. In the UK while gay marriage has been legalised in England, Scotland and Wales, it has been repeatedly blocked in Northern Ireland. We hope that ‘Border Force’ can be a reminder that the rights we expect are not felt across the world.

In the same way that Danny Boyle’s opening ceremony of the 2012 Olympic Games managed to say something about the United Kingdom that we live in and at the same time was a camp song and dance with hospital beds on wheels and red double-decker buses, in our own small way, we want to give the space of the countries in ‘Border Force’ over to artists who are trying to make sense of their own identities, or where they come from, and who they want to be.

As an experimental theatre outfit, Duckie has often explored important cultural and political issues in a ‘fun’ nightclub format, often on Gay Shame night. Gender, class and capitalism have all been previous topics. In a week when the Calais migrant crisis is all over the news, this issue seems more painful and pertinent than ever.

We don’t think that you need to be a migrant in order to discuss issues of global freedom of movement, any more than only LGBTQI individuals can or should support LGBTQI rights. However, there may be an important political efficacy of thinking of us all as migrants given that every human population except some of those in Africa, travelled out of Africa 55,000 years ago. We are all formed through modes of global movement.

Many of us at Duckie are unabashed internationalists. Over half of those working on this project were not born in the UK – including most of the commissioned artists. Your passport is an accident of birth and the world remains shockingly unequal. Migrants from Africa and the Middle East are dying in the Mediterranean sea while rich Europeans take nice holidays abroad. There is a global refugee crisis and the discussion in the UK is focused on protectionist ‘British jobs for British workers’. Many believe the nation state is essential for the establishment of a functioning democracy and therefore real global freedom of movement remains a utopian dream.

The desire of governments and peoples across the world to establish new borders or reinforce those that already exist, even for example from a left wing nationalist party in Scotland, leave us concerned. At the same time as believing in self-determination, the politics of fear and envy is creating a false binary between ‘us’ and ‘them’. As international travel and global communication become easier, we are increasingly isolating ourselves.

We see the consequences of border controls in the most tragic circumstances as people die or are killed, trafficked and abused, fleeing conflict, or dire social situations, or just because they are seeking a better life for themselves and their families.

Wherever you stand on the issue of border controls for the UK and whatever your judgement is about who should be allowed to cross them, it is easy to forget how privileged British passport holders are in their freedom to travel the world.