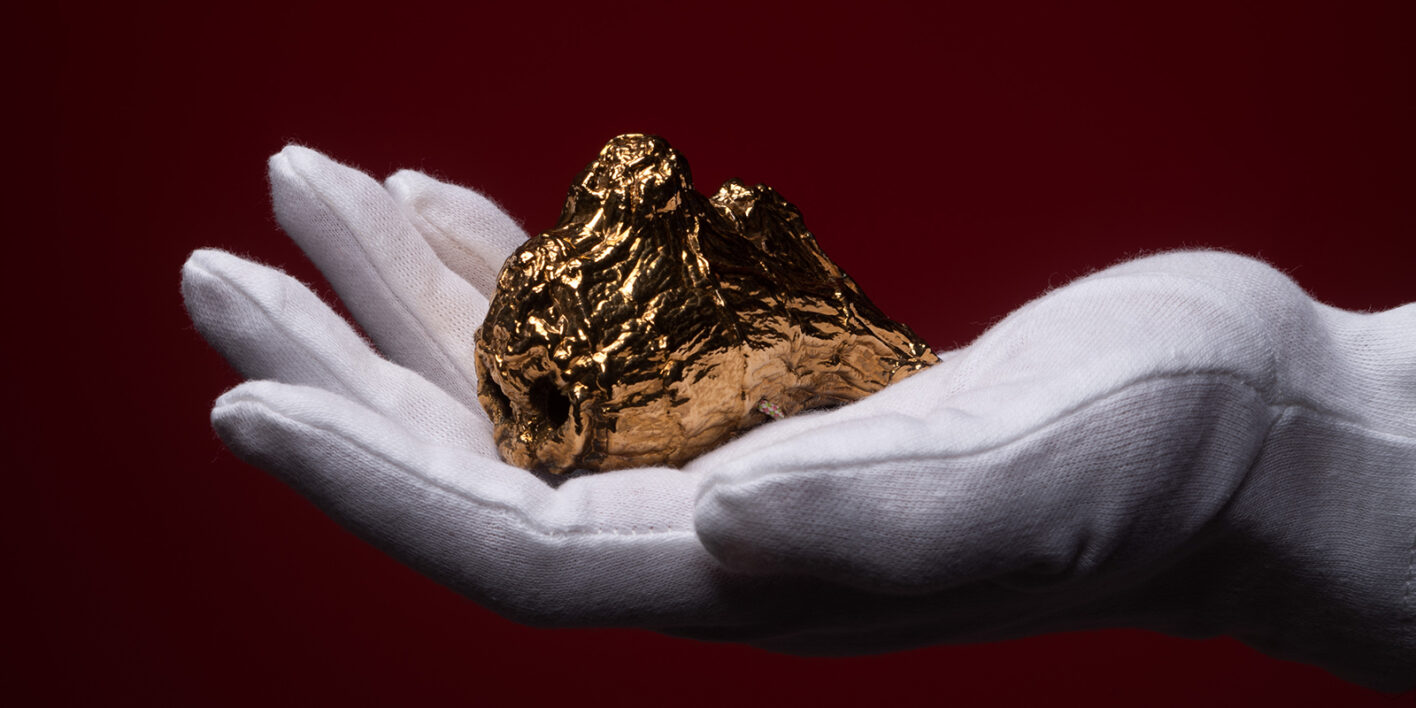 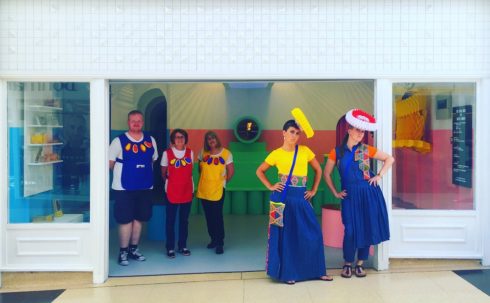 The Gold Nose of Green Ginger, a space of celebration, protection, the holding of sorrow, the sharing of secrets, and the making of wishes.

The story goes like this: In the excavations made to lay the foundations of the Bransholme Estate in Hull in 1967, one of the team of builders unearthed a small casket. Prizing open the lid, he discovered a strange, unknown gold object in pristine condition, and so the Gold Nose of Green Ginger, as it has now come to be known, was discovered.

The Gold Nose of Green Ginger looks like a ginger root, roughly in the shape of a wizened, warty nose. It has two ‘nostrils’ and two braided silk ties, which indicate that it was worn, perhaps in some kind of ceremony.

Archaeologists do not know for sure what the object was originally used for, its source, or how it ended up in Bransholme, but laboratory analysis confirms that it is made of real gold. Some believe it was transported to Hull on cargo ships bringing spices from the East. Others tell a story about the wild boar that used to roam around the marshes and forests that now form Bransholme (the name Bransholme comes from the old Scandinavian phrase meaning ‘wild boar water meadow’). Wild boar forage for food, and it is said that a one such animal unearthed this gold root. A variation of the story says that the boar had special powers and turned the root gold. Wherever it came from, many believe that The Gold Nose of Green Ginger brings good luck, and by bringing it back to Bransholme we hope to bring luck to the area.

There are societies throughout history where a focus on the human head and the senses have been particularly important. In some respects, The Gold Nose of Green Ginger is similar to the pair of eyes beaten from a sheet of gold that were excavated in 1970 from the Roman city of Wroxeter, Shropshire. The gold eyes are thought to have been a votive offering to the gods from someone seeking a cure for an eye disease; perhaps somewhere in the world there was a similar culture devoted to the nose.

In Summer 2017 the Gold Nose of Green Ginger enjoyed two months residence at North Point Shopping Centre in Bransholme, where over 35,000 people visited to wish upon it, hoping good fortune might come their way. It was then handed back to the City of Hull for safekeeping, where it will be on display at Hull History Centre for the foreseeable future. 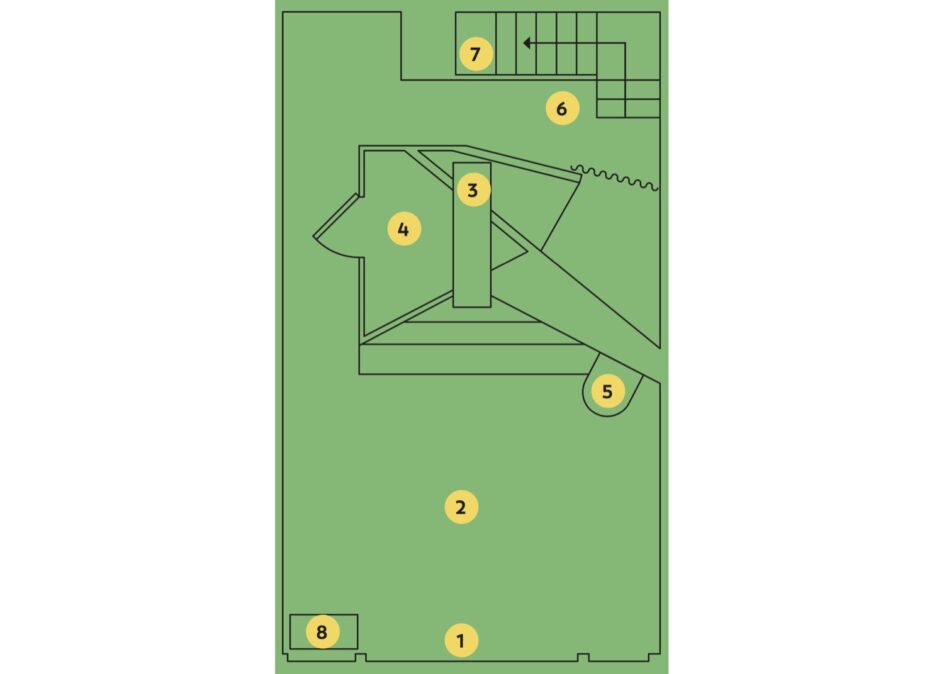 Regular events were held between June and August 2017.
Nose Flute Lessons
Wednesdays, 3pm-4pm
Learn how to play the nose flute.
In association with Culture:Music.

Get Creative!
Thursdays, all day, drop-in
A different creative workshop each week.

Lunchtime Concert
Fridays, 1pm-2.15pm
From classic to pop, interrupt your day with some live music.
In association with North Point Shopping Centre.

Afternoon Tea
Saturdays, 3pm
Pop in for a cup of tea and a chat.
In association with the Ferguson Fawsitt Arms based in Walkington.

After two months at North Point, the Gold Nose of Green Ginger was taken to Hull History Centre. City Archivist Martin Taylor welcomed it to the archive:

“Hull History Centre is the home of many of the City’s most precious things: the 1299 charter; the archives of poets Andrew Marvell and Philip Larkin; the earliest records of our community, and some of the most recent. It’s therefore appropriate that the Gold Nose, the place of which in our City’s history is only now becoming clear, finds a temporary resting place here. […] Some of you will remember the first film in the Lord of the Rings franchise, which begins with the haunting voice over “History becomes Legend…Legend becomes Myth”. By bringing the Nose here, we are all reversing that statement – Legend is becoming History. We are all part of that process.” 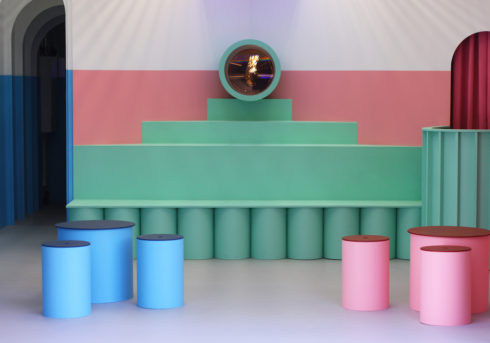 The Gold Nose of Green Ginger by Joshua Sofaer was originally produced as part of Land of Green Ginger for Hull UK City of Culture 2017. Designed and built with How About Studio. 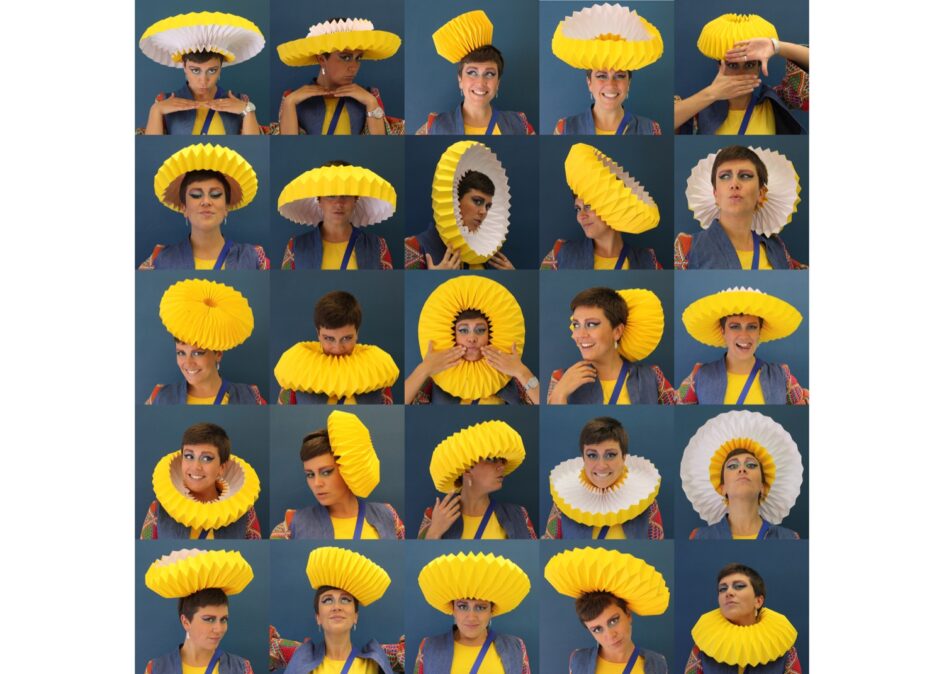 The many people of Bransholme who embraced the Gold Nose of Green Ginger.