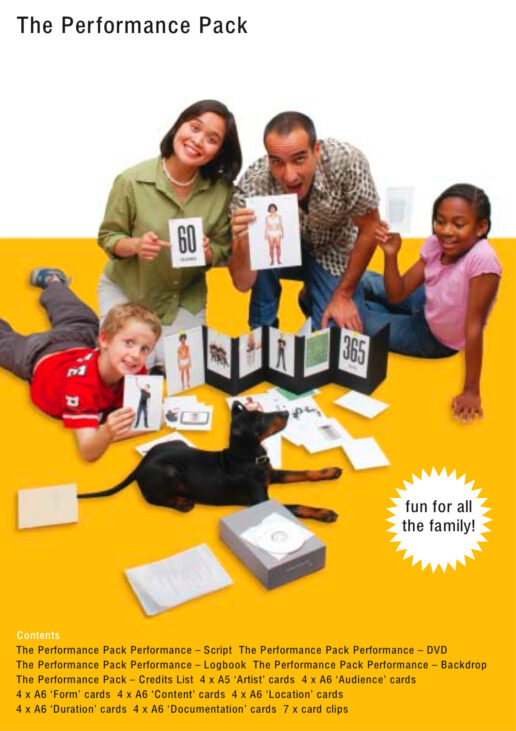 Conceived and created in association with Tate Modern and the Live Art Development Agency, The Performance Pack is a signed and numbered limited edition artwork, a performance enabler, and an educational resource.

Drawing on works which have been informed by performance in Tate’s permanent collection and beyond, The Performance Pack is a ready-made kit containing all the audio-visual material, historical information, key term definitions and props needed to develop a lecture-based performance explaining and exploring the relationship between fine art and performance.

The Performance Pack is aimed at educationalists, advocates and collectors as an introduction to contemporary performance practices or as part of a wider arts lecture programme.

The Performance Pack is financially assisted by Arts Council England.

What is the thinking behind it?
The Performance Pack was commissioned by the Live Art Development Agency in London as a way of developing the legacy from a four-day event called Live Culture. Through performances, exhibitions, talks and discussions at Tate Modern in March 2003, Live Culture celebrated contemporary live art practices within visual culture. The Performance Pack is aimed at young adult and adult audiences, who have an interest in contemporary art and/or theatre but little knowledge of the use of performance within artworks, as an introduction to the sector.

How do you use it?
All the instructions are included in the script. The format is a lecture-presentation.

I don’t quite understand that. Can you explain it again?
Yes, it is a bit difficult to communicate. Basically each section of the pack is illustrated by a series of four options depicted on cards: four artists to choose from, four types of audience to choose from, and so on. After they have seen and heard documentation of various artworks, the audience vote for the option they prefer: the artist they prefer, the audience they prefer, and so on. These choices end up as a final series of cards, which the performer then interprets as a hypothetical performance at the end of The Performance Pack Performance.

I think perhaps I have to see that before I understand it completely.
You may well be right. In fact it is quite simple, just difficult to explain.

Who performs The Performance Pack?
There are a number of performance makers who perform The performance pack in galleries, theatres and colleges, including its creator. You could hire one of them to deliver The performance pack Performance, or you could perform it yourself. Perhaps you would like to commission someone to work on translating the pack into another language or an interpreter to work with an English language performer.

What kind of spaces is it performed in?
The Performance Pack Performance can be performed in theatres, galleries, seminar rooms, lecture halls or even a warehouse space. Due to the small nature of the cards and in order to give all audience members clear lines of vision, the ideal audience size would be between 30 and 50 people.

What kind of technical resources are needed?
The Performance Pack has been designed to be almost entirely self-sufficient, but you will still need a DVD player and monitor, or projector and projection screen.

How else could it be used?
The Performance Pack can also be collected as an artwork, or used in a variety of educational contexts without necessitating a full performance. Teachers and workshop leaders might for example use the cards or the DVD documentation to supplement their own pedagogic practices.