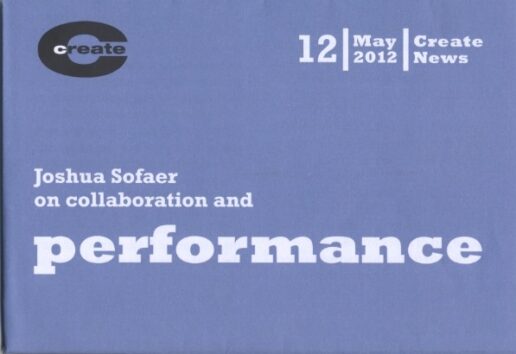 In March 2003 Tate Modern celebrated contemporary live art practices with a series of exhibitions, talks and discussions, under the title ‘Live Culture’. My own modest contribution to this programme was a video I had made the year before called ‘What is Live Art?’. In this straight to camera piece I attempt a definition of the contested term ‘live art’ on Oxford Street in London. It becomes apparent to the video audience that the public are pointing, laughing and jeering at me, but it is unclear why. Until the end of the piece that is, when I turn away from the camera and reveal the hole cut in the seat of my suit trousers, laying bare my bum. My point had been to try and undercut the authoritative definition, to allow meaning to stay open, and to keep the contested term contested, by exposing the narrative to ridicule.

‘What is Live Art?’ was one of a series of performance lectures that I had been making, which I saw as sitting somewhere between art practice and education. After Live Culture, I was approached by Tate and Live Art Development Agency to come up with some sort of legacy for the event, something (sitting somewhere between art practice and education) that would further the discussion of this kind of live contemporary art practice, that wasn’t quite dance, that couldn’t be called theatre, that didn’t fit into any of the categories on offer.

The resulting resource, The Performance Pack, is a signed and numbered limited edition artwork; 175 were issued. It is also an educational tool. Inside the box are all the things you need to make The Performance Pack Performance, which is a lecture about the relationship between performance and fine art.

As was intended, The Performance Pack is held by art colleges, universities, galleries and libraries, as well as by artists and academics, and is used in workshop situations with interested groups. [1]

Each section of the lecture is explored with reference to video documentation of works of contemporary art. At the end of each section the audience help the lecturer to create a hypothetical performance piece, by voting for one of a series of themed cards presented to them.

As a kind of ‘warning’, rubber stamped at the bottom of the pack, are the words: ‘Education defeats art’. This quotation comes from an essay by Theodor Adorno, ‘Valéry Proust Museum’. [2] In it, Adorno brings together two lines of argument for the first time, loosely summarized as ‘for and against’ the institution of the museum. The poet and essayist Paul Valéry takes the case against in an essay entitled ‘Le problème des musées’; the novelist Marcel Proust the case for in A l’ombre des jeunes filles en fleurs, the second book of his giant work A la recherche du temps perdu. Adorno rehearses their arguments side by side in order to try and understand what is at stake both for gallery goers, and the work of art itself, by the existence of the museum. This isn’t the appropriate place to re-rehearse those arguments (Adorno comes to the conclusion that neither and both Valéry and Proust are right on the matter) but I think it is worth pondering part of Adorno’s summary of Valéry’s argument against the Louvre.

‘[P]eople become hopelessly lost in galleries, isolated in the midst of so much art. The only other possible reaction to this situation is the one which Valéry sees as the general, ominous result of any and all progress in the domination of material – increasing superficiality. Art becomes a matter of education and information; Venus becomes a document. Education defeats art.’

Faced with the endless corridors of conflicting styles of great master works, Valéry is overwhelmed, or rather underwhelmed. The excess makes individual works superficial. Pieces can only be seen as part of a historical narrative, of factual information to be consumed, a process of education, in which their power is robbed. Therefore: education defeats art.

In the formation of The Performance Pack (humble and limited a resource as it is) we were mindful that we were in danger of reducing the artworks to ‘educational illustrations’ of the conceptual point that we wanted to make. We were also concerned that we would be creating a canon of ‘key’ works to the exclusion of others, and that the meaning of these works might become crystallised in terms of the interpretative schema that we created for them. This last point is especially insidious. Part of the purpose of art is surely that its meaning, created in collaboration with the audience, is left open. Art criticism, the professionalisation of interpretation, is parasitic of art practice (there is after all no art criticism without art) and at worst, it robs art of part of its potential by authorising its value.

At the same time, there remains an urgency to document, contextualise and disseminate modes and approaches to art making that are not given currency by the conventional art market, gallery or theatre, or those forms of promotion and critical interpretation which circulate around the centre of mainstream art practices. Despite the increasing popularity of live, participatory and collaborative art across the global art scene, cultural commentary is still generally drawn to discrete ‘exhibitions’ and ‘performances’ in recognised art venues. Indeed the documentation of fine art through catalogues, is often part of its sales strategy. Work that sits outside the system of capital circulation, that does not provide fiscal profit, that may well be negative equity, is not often catalogued. In the case of both live and collaborative arts practices, artistic value is met by social value, rather than by monetary value.

If a systematisation of art is presented in The Performance Pack, then it is made only to be disrupted. The statement ‘Education defeats art’, rubber stamped on the bottom of the box, gives a clue to the user, not to forget the work of art itself and not to rely solely on this box of tricks.

At its best, The Performance Pack hoped to inspire people to think about art and to create art of their own. And that is why it is a delight to be able welcome The Collaborative Arts Performance Pack, a new resource for another under-documented area of arts practice. The ‘Pack’ is about sharing the process by which a work of art meets the world, and that is why it is an appropriate form of engagement for a mode of art making that requires negotiation and full participation of its audience, for the work to be completed. Those of us involved in the creation of The Performance Pack take great pride in the fact that Create, the national development agency for collaborative arts in Ireland, saw something in our model worth replicating.

1. The Performance Pack has been translated into several languages including French, German and Italian. The successes, as well as the shortcomings, of The Performance Pack, led me to develop 2 other ‘art education’ resources with Live Art Development Agency: The Many Headed Monster, a boxed kit focussing on the audience of contemporary performance, and Life Lecture, an online resource focussing on autobiographical narratives. For more information on all of these resources, visit www.joshuasofaer.com