Moriya is like one of the Medway towns in Kent – a short train ride from somewhere you would rather be. The train station courtyard is brimming with bicycles belonging to people who are somewhere else.

And just like the Medway towns, Moriya advertises itself on the length of the commuter journey. 32 minutes. Although at times it can feel like being outside the central action, actually the travelling in from here to there is one of the highlights. A train journey alone in Japan is a culturally enriching experience. And living on the outskirts does enable escape from the heaving megalopolis that is Tokyo. It is also a constant reminder that Tokyo (like London, New York, Berlin) is a world unto itself and not representative of the country as a whole.

There are beautiful spots in Moriya. Lots of small farmsteads, with blue glazed tiled roofs; bamboo forests and three rivers snaking through the flat landscape. The sound of the crickets are a permanent accompaniment in even the most sparsely green area. The late summer heat, which chills at dusk really gives the sense of a seasonal change.

There are impressive isolated houses for middleclass families where the wife keeps the stove warm while the husband travels the 32 minutes to Tokyo as one of the millions of so called ‘salary men’.

But there are also a lot of long roads with anonymous apartment blocks, unexciting restaurants and shops in an unimaginative urban sprawl.

Moriya is a relatively new and rapidly expanding commuter city, trying to find its own identity. Efforts are taken. Look at the Moriya City manhole covers, for example; like so much else in Japan, they are very cute. 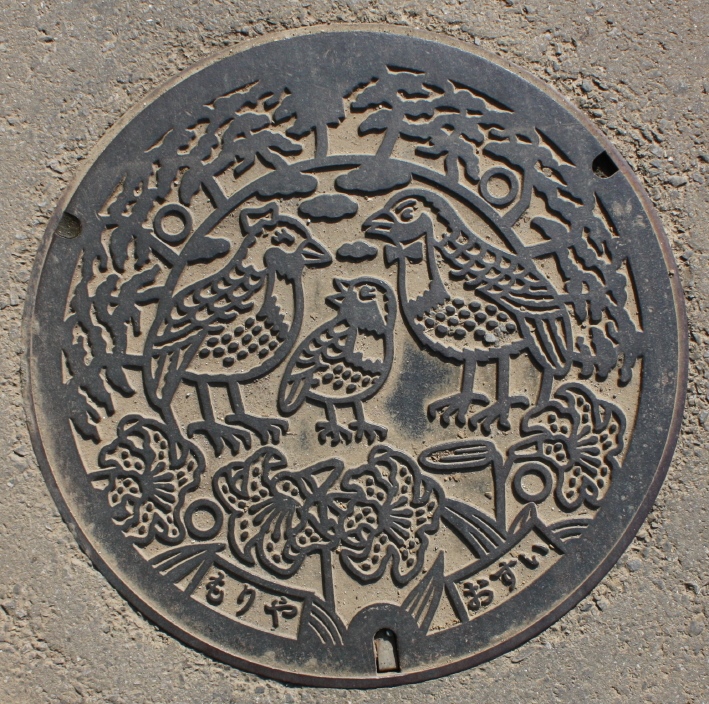 I’m settling in well and enjoying being here. I have spent this first week working out how to use my phone, negotiating the supermarket and learning the quickest cycle route to the station! I’ve joined a gym so that I don’t get fat on all the delicious Japanese food that I’m eating. As you enter in your workout gear, you are greeted by a deep bow and graciously welcomed to the training floor as if your were a dignitary come to inspect the squat rack. Everything is a sharp contrast between tradition and modernity. Take my keys, for example. The key to my studio is this ridiculous long thing that jabs my thigh as I cycle around but my apartment key is a flat oblong piece of metal with the locking information stored magnetically.

The default position in Japan is one of trust. Just as in London there are gates at the train and subway entrance and you need to swipe your pass to get through but unlike in London, the gates are left OPEN. They only shut if you do not swipe. This seems to be a metaphor for the way in which trust is placed in the honesty of the citizens.

On the one occasion that I purchased an inadequate fare for my journey, I went into the office by the gates and presented the ticket I had bought. The inspector looked at it and bowed deeply, apologising several times for my mistake. I needed to pay an extra 100 yen (50p). A little bit different from the on the spot £20 fine in London then. The thing is that trust breeds trust. You want to pay the correct fare because it is expected that you will.

Having said that, once you get to the platform, in peek times, women only carriages operate because of the amount of unsolicited groping that happens in packed trains. Japanese mobile phones always make a sound when a photograph is taken because of sneaky photographs being taken up skirts. So perhaps trust doesn’t extend to sex.

A friend of mine described Tokyo as ‘the land of neon’. The train from Moriya gets into Akihabara, which translates as ‘Electronic Land’ and there really isn’t a neon-free centimetre. When I’m not sleeping or working in my studio, I’m in Tokyo. I’ve visited various places this week, including a few contemporary art spaces and all of us ARCUS artists gave an introductory talk at AIT (Arts Initiative Tokyo) which was a fun evening.

Now I need to tell you about three of the most amazing shops in the world.

Ito-ya is an eleven floor stationary megastore. It is the stationary fetishists heaven. There is literally every sort of paper clip, folder, pen, paintbrush, paper that you can possibly think of. You just cannot believe that there is so much stationary in the world gathered in one place. I was in there for 2 hours. And just when you leave, exhausted from the possibilities of plastic wallets, there are TWO MORE stores, Ito-ya 2, which sells paper products for craft and Ito-ya 3, which sells Japanese papers and, erm, model ships (sorry, I have no idea why).

Then there is Tokyu Hands, the self-proclaimed ‘creative life store’. What does it sell? Well, erm, anything. A million useful things and several million more useless ones. No, literally it sells anything from agate and fox skins to tombola machines. It really is the kind of place that you discover needs you never knew you had. Much of what Tokyu Hands sells, similar to many retail outlets in Japan, is about customisation. You select a ‘life-identity’ from a pre-made selection.

Another extraordinary shop is Kiddy Land, which, as the name implies, sells ‘stuff’ for the kid in all of us. This shop sells much of what the West perceives to be the uniquely cute kitsch of Japan. There is nothing in this shop that has any utilitarian value whatsoever. It is stuffed full of nonsense. Banana shaped plastic figures that dance, miniature plastic sushi stalls, cuddly things of just about every genus possible and this season’s special: a whole floor dedicated to Snoopy.

Yesterday I wandered up past Kiddy Land in Harajuku to Aoyama, to the famous city graveyard. Right in the centre of Tokyo, with the high rise towers looming in the background, are the shrines to the dead; a small city of granite blocks which spookily echoes that of the living.

You may well wonder if with all this, I am getting any work done. Well I have decided how I want to start and I have put in a fairly dramatic request to ARCUS. I would like the entire ‘unburnable’ rubbish collection of Moriya City from one day to be delivered to my studio. This is ambitious, especially as the rubbish is normally compacted and I would prefer it to remain intact. If the request is granted, then I will begin to think about how best to use such an incredible resource but I am trying not to plan ahead too much before my wish has been granted.

Tomorrow we are off to Mito City for our formal welcome from Governor Masaru Hashimoto, of Ibaraki Prefecture, the first in a series of official meetings I have with various individuals and organisations.