This week has seen us move from Sumaré to Aclimação (think Highgate to Brixton) to the house of Debora Bolsoni, artist and programmer at Centro Cultural São Paulo. We are now in the centre of this throbbing megalopolis and I have fallen in love.

I have fallen in love with an after dinner treat.

This is no stale after dinner mint imperial served in an aluminium bowl and fingered by many clammy unwashed hands. Oh no. This is an individually wrapped chunk of smooth banana pleasure in the form of a ‘Bananinha’.

I’ve always had a ‘thing’ about bananas. It hasn’t always been a good thing. When I was a child I hated them. And as I am still unsure about the fibrous texture, I am often sniffing out the ‘pure banana flavour’ delivered in the perfect form: ice-cream, candy, chocolate. At last, I think I might have found it.

Yes, it looks like a cuboid of poo with crusty bits on top but really, it tastes of a tropical paradise. 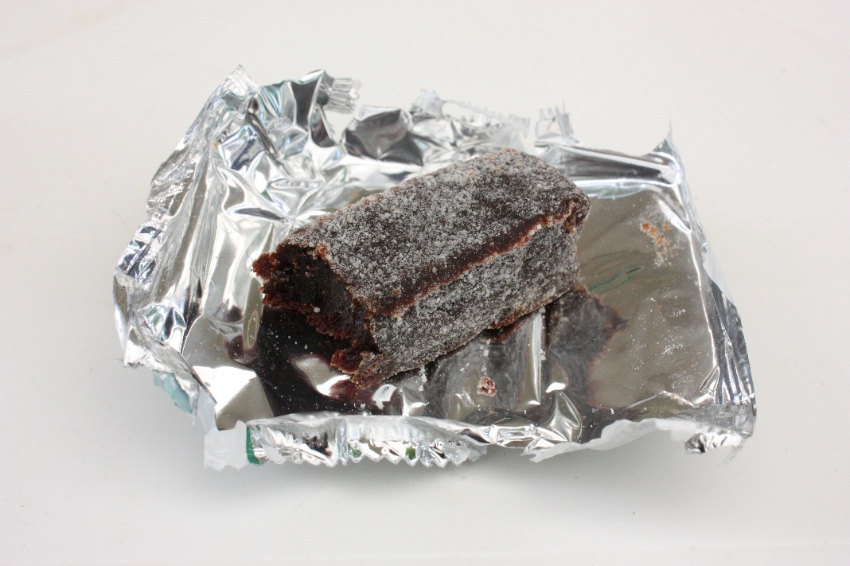 Each bite presents a soft chewy melt of banana loveliness.

Early experiments with refrigeration have proved highly successful and have only increased the gooey pleasure. No, I am not taking orders.

Refrigeration is certainly needed as it’s early summer here and Santa is melting.

I’ve managed to avoid mentioning it so far but it seems impossible to go any further without some kind of acknowledgement. The unavoidable truth is that here, like everywhere else, it is Christmas time, and despite the blistering city heat there is snow everywhere. Snowdrifts have passed under the tropical storms and have landed on shopping centres and artificial Norwegian pines everywhere. Take a look at this 75 meter high compelling monstrosity. You just can’t help but wonder.

Riding on top of this tissue paper, cotton-bud and neon avalanche in his fur-trimmed red suit is the pervasive Santa. In fact, I have never seen so many Santas. You, like me, like many Brazilians (it would seem) might find it odd that in South America, this fat old white unshaven man with inappropriate clothing, braves the city summer heat to be more present than he has ever seemed to me in Europe.

Here, unlike in the UK, children still get to sit on Santa’s knee. (No hysteria here then, about wandering ‘clause’ or what might be happening in Santa’s lap.)

But as the beautiful brown children of this multiracial continent plead with this white father for his benefaction, I, like so many others it would seem, search for an alternative image of festive cheer.

That can be found in the incredible (incredibly simple but incredibly effective) illuminations in the trees of Ibirapuera park. Streamers of low voltage lights have been pinned up trunks and right to the ends of branches, creating an enchanted and spellbinding forest that does offer something of the ‘magic’ of Christmas.

And so to rubbish. There have been a couple of very interesting meetings this week.

‘Coopmare’ is a cooperative of catadores and the longest standing in São Paulo. Although their numbers have been severely reduced due to the curtailment on the days trucks can collect garbage (another traffic reduction measure) there are about 20 full time catadores that work here with additional affiliated members.

Although there has been some sponsorship (through for example the Corporate Social Responsibility schemes of Brazilian banks) basically this is a private set up.

Based underneath a city fly-over are thousands of bags of bottles, cans, cardboard boxes etc. Anything that can be recycled. These have either been collected by the catadores or brought by local residents.

The items are then sorted, where possible compressed, and then collected by the recycling companies.

90% of aluminium in Brazil is recycled. This is a huge amount and the foremost in the world, recently overtaking Japan. But whereas in Japan it is (as I discovered last year) because everyone is a ‘good citizen’ and disposes of their rubbish correctly, here in Brazil it is purely because of the economic imperative. Aluminium cans are hunted and collected because they are worth money. You don’t see cans littering the streets because they are swept up almost the second they are thrown away.

One interesting thing about Coopamare: no smell. And this isn’t because they are washing it at the cooperative because they aren’t. After 20 years of living next to Coopamare, the citizens of this neighbourhood have come to learn that it is they who need to wash the recycling before they throw it out.

Another fascinating trip was to the Prefectura da Cidade de São Paulo Secretaria de Serviços to meet with the Diretor da Divisão Administrativa, Jorge Bernardino Tassi (the person in charge of the rubbish personnel for the city). I don’t think a more welcoming man could be met; or one that could manage to share so much personal information with complete strangers in such a small amount of time. (‘My son speaks Russian, Spanish and Japanese, he is 2 meters tall and very muscular; my daughter is severely anaemic, she recently had an operation to remove body fat; I am a football referee and have a classic white beetle VW.’) Patricia Ceschi who is my (brilliant) producer here didn’t know quite which bits of information it was useful to translate.

Jorge Tassi is a self-confessed ‘people person’; that is, after all, his job. He introduced us to the ‘star attraction’ of our visit Alfonso Celso Teixeira de Moraes (they don’t stint on the names here).

Alfonso is a mechanical engineer by training who is now, well, a kind of rubbish engineer. For 20 years he worked as a mechanic in the municipal department that maintained the garbage trucks. When waste collection and disposal was privatised, he was called upon for advice. After some subsequent training in environmental management, he became a technical expert on trash. (He has been surrounded by rubbish for 38 years.)

He is a living database on all things to do with São Paulo garbage. All the figures were available to him without the slightest hesitation or recourse to any notes. And some of the figures are astounding.

São Paulo produces 9,700 tonnes of domestic rubbish each day. Out of that, approximately 2,000 tonnes have the potential to be recycled but in reality only 140 tonnes make it. (In fact, as Alfonso explained, 60% is organic matter and cannot be conventionally recycled, 20% is immediately suitable for recycling, and 20% is suitable but practically near impossible to recycle – think of a piece of paper torn into little bits and thrown out with your banana skins.)

Recycling is handled by private companies or by the catadores, without municipal support.

Each person throws out an average of 0.85 kg of rubbish every day, which means I would discard about 6 times my body weight in a year. (If you count in the commercial waste, the figures nearly double – 15,000 tonnes per day, 1.2 kg per person.)

There are 2 private companies that are 5 years into 20-year waste collection and disposal contracts. Each is responsible for one half of the city. As companies they are not allowed to do any other activity and they are subject to continuous review. So far, Alfonso thinks they are doing a pretty good job.

If the waste suitable for recycling is not sorted before it is thrown out for the municipal collection, it will not be recycled. What happens to the waste? 100% landfill. One-hundred-percent.

This badly photographed maquette shows what a landfill (supposedly) looks like before it has been filled and how it is transformed into a lovely green field 20 years later, once the toxic fumes have died down:

And here is a photograph of some photographs of the ‘historic’ landfills of São Paulo:

The current landfill in operation is 1,000,000 cubic meters. That is a lot of space. But each day 970 trucks, each carrying 20 cubic meters of ‘produce’ make the journey to the dump. Eventually it is all dumped out.

São Paulo is on its last landfill. Even in a country this huge, desperate alternatives need to be found. (1) Incineration would see an 80% reduction in the necessity for landfill but is very expensive, (2) Composting would need to take place outside of the city as the fumes are very hazardous, (3) Effective recycling would reduce the amount of waste that needs to be disposed of, but the most dramatic solution would be to (4) Reduce the amount of rubbish people throw out. The rubbish expert’s advice: waste less. Yes, it sounds like something we’ve heard a million times before, but when each of those one million times represents a cubic meter in the last landfill in São Paulo, the urgency for action cannot be overstated.

While all these facts and figures were mind-boggling and important, it was actually something Alfonso said about littering in the city that really made me think. São Paulo is clean in the rich parts but littered with garbage everywhere else. Why? Alfonso said it was about pride. He wants people to have pride in their city, to own it, to feel it is theirs. Once they do that, he believes, they will treat it with respect. He gives the example of the metro. Although it is limited in size, it is a vital transport route for the millions that travel on it everyday. And it is spotless. This is completely true. When you walk off the street and descend to the underground railway, it is like entering the sanitized world of the cosmetics hall of an upmarket department store. Alfonso says that people who eat a chocolate bar on the metro put the wrapper in their pocket until they have passed through the exit barrier where they retrieve it only to chuck it on the street. Alfonso was wary of over-interpretation but he seemed to think that people don’t litter the metro because they need it and are proud of it. That is the way he would like them to think of their city as a whole. Perhaps this is the real solution to the garbage problems, and not just of Brazil.

It was an immensely informative meeting.

Just as we were about to leave Alfonso mentioned the sort of beginnings of a ‘Waste Museum’. Of course my interest was immediately peaked. In a disused office room off the main corridor was an eclectic collection of objects salvaged from the rubbish and arranged thematically.

Some with descriptive labels: ‘89: Chimpanze Talhado na Casca do Coco’.

Who did this? Why? Is it ongoing? Information was scarce and Alfonso had left for another appointment. But I am determined to find out more. In this ‘museum’, away from the public eye and barely bothered with by the staff of the municipality, lies something of what is at the heart of my research here in Brazil. Why do we cherish some objects and throw others out? What is the value of material culture? While the art market is kept buoyant with high cost artefacts, what worth can be found in the things we throw away?