The invitations have been sent, the windows have been cleaned, the beer has arrived and we are all set for the opening tomorrow. In the last blogless fortnight I have been sanding, sorting, washing, stacking, vacuuming, displaying, labelling, alongside a group of stalwart volunteers, to get my Rubbish Library / Library Rubbish ready. Twice my bodyweight in white emulsion has been laboured on these shelves. I laid the carpet with such precision that even my father (the master craftsman) would be satisfied by the joins. Hours have been spent considering the Japanese-English translation of various items of rubbish. And so now I can sit at my library desk and write my blog.

Let me take you on a tour of the Rubbish Library / Library Rubbish.

The library is built as a room within a room in the centre of my studio. You can walk through it and come out the other side. But before you do, you have to take off your dirty shoes and put on a pair of slippers. Oh yes, I want my rubbish room to be clean, clean, clean, just like the recycling and waste disposal plant Sahima Clean Center Teraku that I visited all those weeks ago.

The outside view has been kept purposefully ‘rough and ready’, with the intention that when you step inside, you feel transported to another place.

The internal space is a long corridor of a room, with shelves on two sides. At one end there are the library notice boards that explain a bit about each archive.

At the other end is the librarian’s desk at which I am typing now. (Yes the Rubbish Library / Library Rubbish is fully equipped with sockets and internet access! And, OK, no, I didn’t wire them myself.)

On one side of the room is the Rubbish Library, a selection of reading material thrown out by the citizens of Moriya on a single day: Thursday 6 November 2008. Visitors are invited to browse the shelves, remove and read the books.

This is only a selection of what was available and doesn’t seek to be representative of anything other than itself. It is fascinating however, to see what has been thrown up (or rather thrown out) by the process. There is a lot of Manga and it is very satisfying to be completing sets in the library from various different people’s collections.

I have tried to include some jokes in the layout by placing different subjects adjacent to each other. For example, this:

…is next to this:

Actually it was religion that caused most ‘trouble’ as Moriya Manabi-no-sato, the building that houses ARCUS and belongs to the city, is strictly not to be used for ‘religious purposes’. So these books are as taboo as the pornographic ones, if not more so.

There are some very pretty pictures created, like the fading spines of the music books.

My personal favourite is the section dedicated to men’s hairstyles.

There were quite a few books thrown out on the subject on 6th November, including this one, which depicts the latest styles.

I wonder which one the owner chose.

There are also some classic retro editions in the Rubbish Library, including this 1987 football coaching manual.

On the other side of the room is the Library Rubbish, an archive of all the rubbish thrown out by Moriya City Library in one week: Sunday 9 November to Saturday 15 November 2008.

Although everything that could be washed has been washed, some of this stuff is a bit nasty (for example the newspaper used to dispose of organic waste) so visitors are requested to liaise with the librarian if they want to take a closer look. Disposable gloves and masks are available should they be required or requested.

Although washing the rubbish was a real chore, it wasn’t half as bad as it might have been in any other country in the world. If you are set the task of washing rubbish, make sure it is in Japan. The entire liquid waste for the week can fit into half this medium sized jar.

I hope you appreciate that each of these coffee granules had to be sorted from the rubbish! But as they were wet they stuck together and weren’t too difficult. The dust however, was more problematic.

But gram for gram, the pencil shavings were the most time consuming thing to sort.

Other everyday things have a kind of banal beauty to them.

A lot of the stuff had to be dried first. I had shallow drying racks with various foodstuffs both inside my studio and on the balcony for several weeks. The fruit parings were the most troublesome because of the flies but after a windy day or two they dried out.

There are a few lonely odd things that have a kind of pathetic resonance. The single book spine for example:

…or the small blue bouncy ball. (It is a ball and it bounces but to be honest, I don’t know if it really is a ‘bouncy ball’ or not.)

I think my personal favourite is the long row of stacked bento boxes. 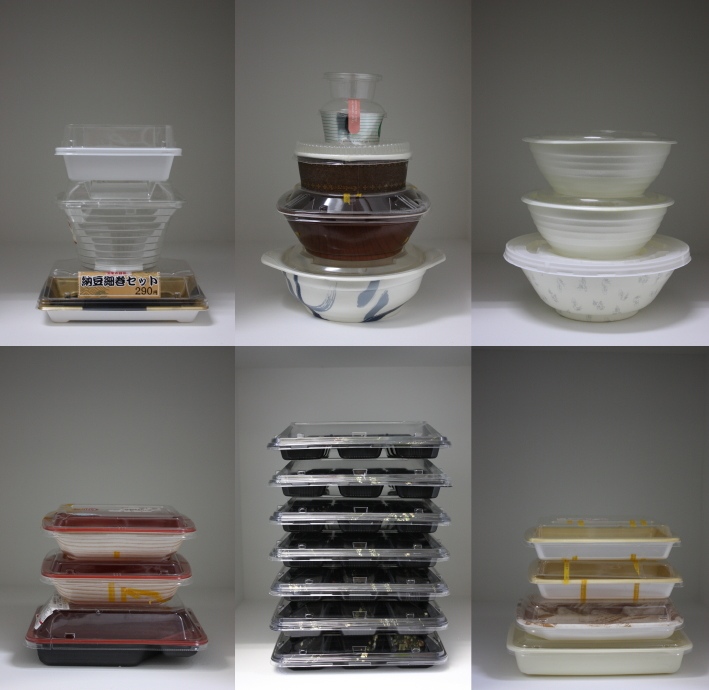 It has to be said that I am very happy in my library. I put on some music and dance up and down the aisle stopping every so often to pick up the odd bit of fluff that might have gathered somewhere. I hope I don’t get over protective of the ‘layout’ when the punters come. I’ve got a series of events planned, which start with the Champagne Reception for garbage collectors in the middle of the opening tomorrow night. After all, the whole idea of this space is that it is encountered by the public. Thank goodness they are Japanese.