This week has been packed with cultural stuff.

Thursday was (another) religious holiday in Portugal. This time it was Corpus Christi or ‘Solemnity of the Most Holy Body and Blood of Christ’ to give it its full title. It celebrates the Eucharist. In a lot of countries this feast is relegated to the Sunday following the Thursday following Eastertide (it’s all so complicated) but in Portugal they leave it on the traditional Thursday (which I am convinced is simply a precursor to trying to get Friday off too and thus have a super long weekend). Anyway, everything shuts down, so I took a trip to Guimarães.

Guimarães is considered the ‘birthplace’ of Portugal and is a medieval city that will also be European Capital of Culture in 2012. Both things – past origin and future culture – are advertised heavily. This place is well equipped for tourists.

The old city is very pretty and feels almost like a film set, transporting you back in time. At one end is the castle, which looks like it modelled for Playmobil or Lego, such is its order of straight lines and neat battlements.

The palace is generally a bit dark and empty but has the most amazing chimneys built with curved bricks. 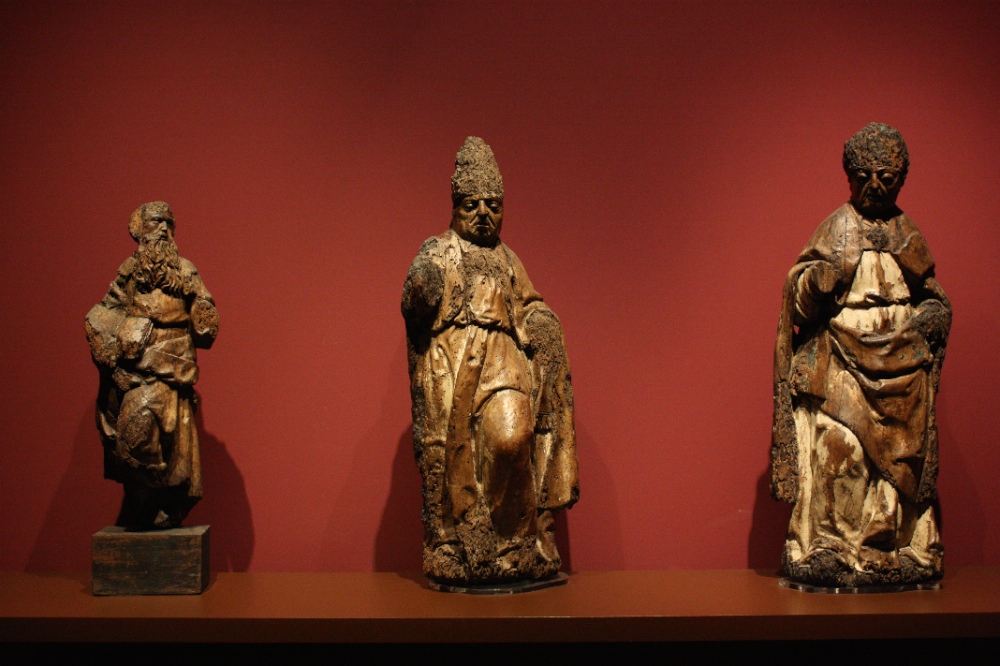 These distressed statues, ravaged by woodworm, were saved from the Chapel of Casa de Aveleira. The devastation caused by time and insects only contributes to their humanity.

Out in the streets, women had gathered to lay down cut grasses, vegetables and petals in a flower mural celebrating Corpus Christi that stretched down the entire length of one of the winding Guimarães streets.

This highly ephemeral street painting, at the mercy of a simple gust of wind, and laid down with love, felt very close to some of the kinds of interventions that I have been trying to make myself in urban landscapes over the past years. It was very rewarding to see this tradition.

Interrupting this idyll is something I have noticed, not just in Guimarães but across northern Portugal: the tremendous prevalence of hawking on the street. I am not talking about birds of prey, or the advertising of goods for sale from quaint wooden barrows, but rather the aggressive clearing of the throat as phlegm is brought up from the inner regions of the body and spat out onto the pavement. With an upsetting regularity a gentle amble through the delightful old streets of town will be punctuated by the sight and sound of even the most respectable looking of citizens twisting in their cheeks as they round up the yellow mucus, depositing it at my feet as I pass by. No offence intended, I am sure. Even as I sit and type in my apartment I hear the occasional distant sound of rasping glutinous muck being drawn from sinuses across the city. This is one cultural variation I could do without.

This week’s funicular is a whopper. Guimarães has one that runs from the city to Penha mountain over 1.7 kilometres, climbing over 400 metres and taking about 10 minutes.

You know that misanthropic feeling that you get when you’re in the queue for things like this, filled with nervous anxiety because you want to secure the best place for yourself (and your companions if you are not alone) and don’t want to be sitting next to some stranger who might somehow ruin the view? Well no such problems were confronted in Guimarães where I had the thing almost entirely to myself.

After a leisurely day, I boarded the train and returned to Porto.

Porto itself was the European Capital of Culture in 2001. The centrepiece of their artistic offering being the incredible Casa da Música designed by the Dutch architect Rem Koolhaas, which only opened after years of delay in 2005. It was well worth the wait and immediately became an icon of the city. It is a fantastic building with intriguing and sensuous spaces and an extraordinary acoustic.

Once a month Casa da Música hosts ‘Clubbing’, in which music of various kinds fill all the spaces of the building. June’s event commenced at 10.30 p.m. with the Orqestra Nacional do Porto in the main hall as Finnish composer Magus Lindberg conducted his own 1985 composition Kraft, and ended in the early hours of the following morning with German electronic project Moderat.

If you thought the orchestral opening was a ‘safe’ selection then you were in for an eardrum-shattering shock.

Normally it is the percussionists who look bored during a classical concert, waiting for their one cymbal crash at the ‘dramatic bit’ but in Lindberg’s Kraft it is the string section that is left twiddling their thumbs. The stage (and some of the auditorium) was filled with giant gongs, oil drums, bits of car, and other things that make loud noises when you hit them with a hammer or a mallet.

At one slightly disconcerting moment the entire brass section left the stage and made their way into the auditorium and I found myself staring close-up at the twitching embouchure of the horn player, risking permanent damage to my auditory faculty as he blew up my ear (as it were). The piece ended with at least 2 of the 5 soloists blowing through hosepipes into amplified buckets of water as the sounds shifted from the urban to the marine. Did they buy the buckets especially I wonder, or were they just ones found lying around?

Of course all this is perfectly ordinary now in contemporary classical music. The piece is, after all, 25 years old already but the battering force of sonic energy still packed a strong punch and had some of the well dressed devotees of the Orqestra Nacional do Porto, who were after something a little risqué, wondering if they had taken a leap too far.

(An aside. Not only were the seats in this auditorium silver velvet but instead of hinging up and down like a conventional theatre seat, they slid in and out. I have tried to illustrate here the slide action by photographing my own slid out seat next to the unoccupied seat beside me.)

While outside a 17 piece electronic guitar band thrashed away.

‘Clubbing’ at Casa da Música really delivered. It opened up the incredible spaces of the building to an eclectic audience of all ages and the programme was genuinely diverse enough to offer people something that they knew they liked as well as new discoveries. There was plenty of time for drinking, dancing and socialising. Casa da Música is proof that investing in cutting edge architecture can provide a social and cultural epicentre for a city.

Porto has been brimming with ‘activities’ this week. As well as the monthly occurrence of ‘Clubbing’, the giant book fair has taken up the main city square, FITEI 2010 is in full swing, and the annual 40 hour non-stop event Serralves em Festa has drawn massive crowds. On several occasions, locals have been keen to put this hive of activity into perspective: “It’s not normally like this you know. After June there is nothing.”

Serralves is Porto’s contemporary art museum on the site of the massive Serralves estate, which the city acquired in the mid-1980s. The museum opened in 1999 with a new building designed by Álvaro Siza. There is also the old Villa on the estate as well as various outbuildings, a huge park and a working farm. I have been there a few times now and the exhibitions are generally excellent. Shows are themed and the Serralves Foundation have a large collection of artist books and text works on paper that are particularly interesting. Serralves em Festa is now in its seventh year. It is a massive undertaking, with over 80 events spread throughout the estate day and night for one weekend a year, from children’s workshops to late night DJ sets. I had heard a lot about it and was greatly looking forward to being there. We were also presenting our fifth and final ‘action’ for Viver a Rua.

It was great to see so many thousands of people in the grounds of a contemporary art museum but I was tremendously disappointed by the programming decisions of Serralves em Festa. Here was an opportunity to introduce a keen and intrigued non-art audience to new, interesting and high quality work. But Serralves programmed easy, bland and conceptually vapid stuff that I found patronising – mostly circus, street arts, and easy listening.

There was nothing that you couldn’t see in any other park or street fiesta anywhere else. It is true that I was there on the Sunday, which is noted as being the ‘family’ day but even if the remit had been for accessible child-friendly activity, they could have done so much better than the pretty puppets they chose to string up. On the Serralves Foundation website, they state that their mission “is to raise the general public’s awareness concerning contemporary art and the environment”. For what it is worth, in my view, they did not succeed, despite leaving the doors of the main exhibition spaces open. It was a nice day out in a park then, but not anything that reflects the dynamic world of contemporary art. A missed opportunity.

It was into this mediocre maelstrom that the intrepid Viver a Rua communicators went to talk about our project to rename a Porto street. Here the stalwarts Joclécio Azevedo (NEC Artistic Director) and Cristiana Rocha (NEC General Director) strike up conversations.

People were generally very receptive. I think that they were pleased to have some one-to-one interaction rather than just look at the pink and purple of a princess on stilts. We move now into the final week of the competition.