In this week’s blog linked to The Rubbish Collection, Curator Sarah Harvey looks at some of the materials that are on display in the exhibition.

The second phase of Joshua Sofaer’s The Rubbish Collection art installation has involved tracing the journeys of the Science Museum’s rubbish, to find out where it goes, and how it is processed. This has enabled us to work out what materials to bring back for display, and in what quantities, to represent 30 days’ worth of Science Museum waste.

Rubbish leaves the museum via a variety of different companies but the vast majority is taken by Grundon Waste Management. It goes to their site at Colnbrook, near Heathrow, which holds three centres; a transfer station, a Materials Recovery Facility and the Lakeside Energy from waste plant, co-owned by Viridor Waste Management.

The interior of the Lakeside Energy from Waste plant © Science Museum

Today I’m going to focus on the materials on display from the Energy from Waste plant. When you think of an incinerator that burns rubbish you might picture a dirty, sooty, very smelly and unpleasant place, but it’s actually an extraordinary, almost clinically clean building (except for the container where the rubbish is held), and it’s surprisingly beautiful with a giant claw grabbing up to six tonnes of rubbish at a time to feed the incinerator fires.

All the Science Museum general (non-recycled) waste goes to Lakeside to be incinerated. Four products come out of that process: energy, incinerator bottom ash, air pollution control residue and clean air. The largest output is energy, with the plant providing enough to power 50,000 homes per year. We have calculated that the energy produced by incinerating one month of Science Museum waste is enough to light one of our gallery bulbs for nearly 24 years. 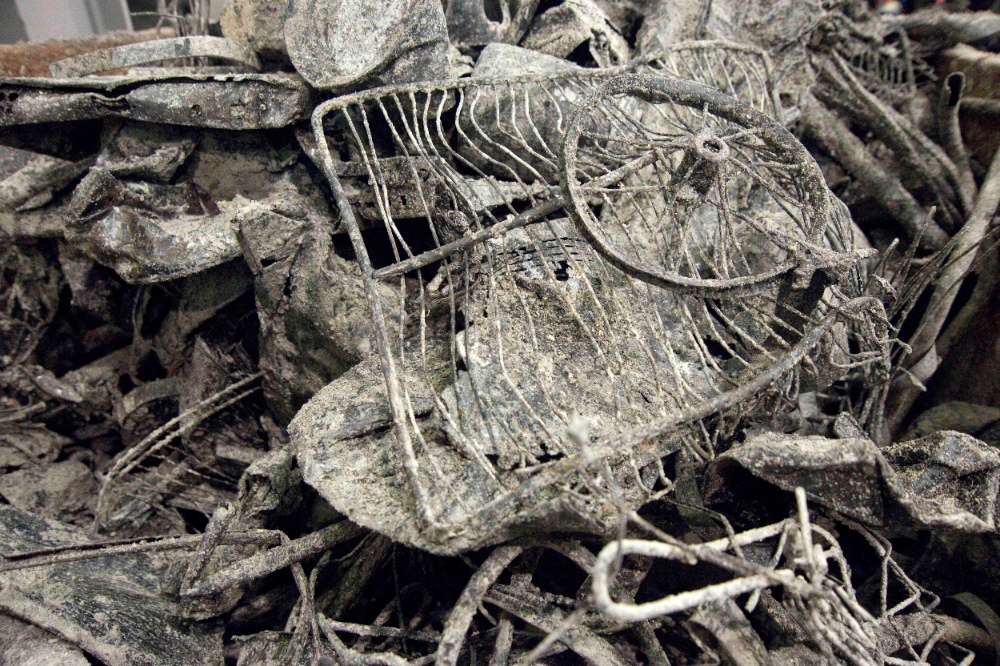 The energy is produced by burning the rubbish for approximately 3 seconds at 950 degrees centigrade, which is long enough to combust most materials. At the end of the process, incinerator bottom ash is left over. This ash still contains large pieces of metal which are separated and sent to be recycled, and the ash itself is left to ‘mature’ so that chemical reactions can take place that lower its pH value. This aggregate is then used in the construction industry, primarily in road building. You could be driving on your old rubbish.

One of the most remarkable things about the incineration process is that the air that comes out of the plant is actually cleaner than the air that goes in. This is because it is very carefully filtered to contain the toxins released during burning. The filtered ash is known as air pollution control residue (APCr). Historically this toxic ash would have been contained in hazardous waste landfill, but new technologies and research are now finding uses for it. Grundon have invested in a company called Carbon8 who use carbon dioxide to neutralise the toxic heavy metals and materials, making them permanently non-hazardous. This safe ash can then be used as an aggregate and, alongside other recycled materials including wood, makes the ‘Carbon Buster’ carbon-neutral breeze blocks we have on display in The Rubbish Collection.

It’s been very encouraging to find that the Science Museum rubbish is producing some useful and valuable products through incineration. However, one of the big findings from our documentation of the Museum’s waste was that there is still a lot of recyclable material ending up at the incinerator. Those materials retain much more value when they are recycled so by continuing to improve and refine our recycling systems, and through new initiatives like separating our food waste, we hope in the future to decrease our general waste further.

Phase 2 of Joshua Sofaer’s The Rubbish Collection is now open at the Science Museum and runs until 14 September 2014.