Unlike London, Paris or even New York and Tokyo, São Paulo is not a city for window shoppers. A casual visitor might well think that there are barely any shops at all. You have to know where to go. There are very few glittering window displays inviting you in.

Of course there are shops, with windows, but there is a predominance of markets and malls, the former sprawling over many streets, the latter over many floors.

Personally I have never understood the attraction of malls, the homogeneity of which I find alienating. It has been so wet here though, that sometimes a mall roof is a welcome protection.

Everyone is talking about the rain. It’s a bit like England. I’m sure it will make those of you still enveloped in the winter freeze exercise your schadenfreude to know that it rains and rains and rains. Everyday. If you want to feel better about not being in this tropical paradise, check out the weather report for São Paulo. Heavy rain: day after day.

No umbrella can withstand the pelting downpours. The pavements simply empty as pedestrians take cover. The moment the firmament turns down the volume, the hoards converge to continue with their journey until the next deluge.

As irritating as it is for a visitor to get wet and wonder what to do (having used up all the tokens saved for a rainy day) it is nothing compared to the misery faced by the thousands who have been displaced. With vastly inadequate drainage, huge sections of the ultra poor flavelas have simply been washed away. (This is most probably to the satisfaction of local government, which wants these ‘slums’ cleared anyway.) Even in the middle class ‘heritage world’ of São Luiz do Paraitinga where we stopped for a day en route to the countryside pousada late last year, the rain caused devastation. Mudslides demolished the town’s iconic church, many houses, and left thousands homeless. The emergency appeal saw residents calling for ‘anything’. Everything has gone. We need anything.

So as the Haitian disaster quite rightly engages international support, the displaced here struggle with little help. Mother Earth the avenger reeking havoc to humanity with a flick of her wrist.

And so to the protection of the mall. Actually most of this week I have been indoors, listening to the rain drumming on the corrugated roof, writing up my proposals and presentation, venturing out to the gym for a break, or the supermarket for a snack.

At the mention of snacks:

This week on the banana tastings we have two lollies, a chip and a pop.

Sorvesan’s Banana com Canela was the cheapest ice-cream I have ever bought (about 30p) and was quite nice. Banana with cinnamon reminds me of my childhood, where an impromptu desert would be slicing a banana and pouring a mixture of brown sugar, lemon juice and cinnamon over the top before grilling it until it became like a kind of toffee on top of hot banana. Lovely.

Another banana/cinnamon combo was bio2’s banana com canela frutas orgânicas secas which was so moreish that I managed to eat most of them before I took the photographs. Freeze dried bits of banana yum.

And finally, for this week’s update, Ultrapan’s Banan’up Néctar de Banana, which I only bought because of this bloody update thing, fully expecting it to be foul. It scraped a pass, but I will not be purchasing it again.

Here are some places to shop in São Paulo.

The area around Brás (suitably spelt like a collection of ladies undergarments but pronounced with a flat vowel, as in a Yorkshireman saying ‘brass’) is the biggest clothing market in the whole of Brazil. 55 streets of outfitters and the largest wholesale mall in Latin America. Mind you, it’s pretty much 55 streets of Primark. Never have I been amongst so many retail outlets with so little temptation to make a purchase. I am however, in the minority. People come from all over the country, and as this photograph will testify, they don’t shop lite.

The area around Rua 25 Marco is a sequin heaven. Yes, here there is truly a bauble for everybody. Shop after shop after shop of beads, feathers, sequins, and threads, alongside party shops selling costumes and novelty accessories. Now here, for me anyway, the temptation is impossible to resist. 25 Marco (“Vinte Cinco de Marco”) is the place you go for your carnival creation and although hectic at all times of year, it is swarming with shoppers as the annual shindig approaches.

In Praça da República there is a weekly market with crappy paintings, leatherwear, and so on, with a line of stalls selling semi-precious stones.

One very interesting novelty here: a group of ‘nurses’ touting for business with sphygmomanometers. This is possibly the most inventive hawking I have ever seen. And they might actually save your life! (Mind you, they didn’t have any takers while I was there.)

Liberdade is ‘Japan Town’. São Paulo has the highest population of ethnic Japanese outside Japan. In the supermarkets there can be moments of cultural and geographical confusion as, for a split second, you think you are on a different continent altogether.

But if there is any confusion, then it is soon put to rest. São Paulo is not Tokyo and the Japanese here are, by their own repeated identification, Brazilians. Most of the immigration was two or three generations ago. As if to underline this, I present you with a photograph of a ‘sakerinha’ – half saké, half famous Brazilian cocktail ‘caipirinha’.

Along the streets of Liberdade there are markets with Japanese goods, including these very cute water lilies.

The mother of all markets, is however CEAGESP – Companhia de Entrepostos e Armazéns Gerais de São Paulo (The São Paulo General Warehousing and Centres Company). To describe it as a ‘market’ is a grand misnomer. It is more like a town. This is the larder of the megalopolis. We got up at the headache hour of 5.30 a.m. and took two metros and two trains, sandwiched with a walk either side to get there. It was also raining. Of course. Without a map of the ‘market’ it was difficult to know where to go. All of food is here but on this, our first trip, we only saw fruit and flowers.

However, here is a nice thing: hunky Brazilian guy with wide smile in back of truck with pickaxe chipping away at ice for fish market.

Streets and streets of trucks with boxes and baskets packed full of produce follow.

Beyond this, the flower market, which makes Columbia Road look as irrelevant as a single grain of sand on Copacabana Beach.

My own preoccupations return to Grandma. The cliché: I can’t believe that she is really gone, triggers an odd sort of upset, in which in a kind of metaphysical way, I step outside myself, trying to observe what I am feeling.

In an absurdly grand (or perhaps it should be grandly absurd) gesture, I ended up buying many more flowers than I could carry at the CEAGESP Flower Market. Struggling back with them on the rush hour trains was no joke.

Back at Débora’s house (and as much in a tribute to the sucata recycling of Brazil as the practical fact that there simply weren’t enough receptacles to house this floral abundance) I made hanging vases out of plastic mineral water bottles.

It was the day before Grandma’s funeral and I wanted to do something. When I returned to Brazil, I knew that I would miss it. To be honest, I felt relieved. But as the time got closer I craved the formal outlet and institutional parade of the crematorium and to hear the family eulogies. So I guess the flowers were to mark this day out as an occasion.

The first picture shows big, plump, pink ‘antique’ Roses and pale blue Hydrangeas. The second Sunflowers. The third Anthurium. The fourth Strelitzia (Birds of Paradise) with Anthurium, and what I think might be a Yucca flower, possibly Adam’s Needle. The fifth shows my desk, with more Roses and a vase of Strelitzia, Anthurium and the incredible Zingiber Spectabile (Beehive Ginger) which look like they have come directly from the set of ‘Pandora’ in James Cameron’s Avatar. The sixth and final photograph shows tropical Protea with more Yucca. 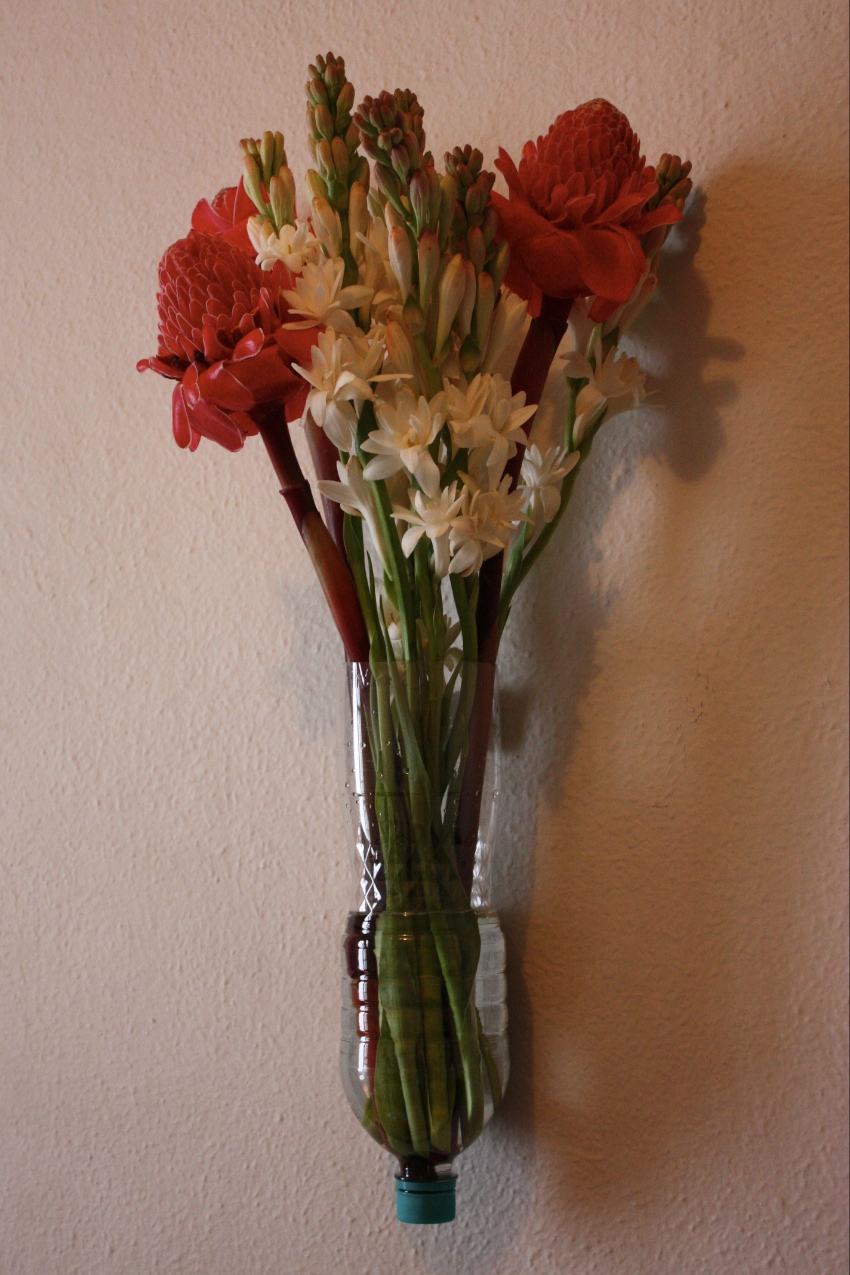 My aunt sent me the order of service, the music and each of the speeches. Half way across the world, with my watch synchronised, I sat at my computer with my photograph of Grandma on the desktop, listening first to the Mozart (Piano Concerto 21 in C – Andante) and later to the arrestingly fragile Gracie Fields 1935 rendition of ‘When I Grow Too Old To Dream’. Whimpering over the keyboard, I read each of the homilies in turn, really trying to summon the voice of each of my relatives: my dear dad, my uncle, my sisters, my cousin, my aunt. Clearly my borrowed desk in São Paulo is not the same as a pew in Oxford crematorium but I did manage to focus very intently on Grandma, to feel the glow of her spirit, and to think again, about what all this means.