…my work as Thinker in Residence at Performance Space has come to an end. It’s been fascinating and I shall write it all up somewhere else but it’s not really in the spirit of this blog to be preoccupied with work.

Regular readers will be aware however, of the longstanding preoccupation with things banana. Well this week I experienced a new addition to the catalogue. It’s the love child of a foam banana and a Milky Way: The banana whip Milky Way.

This Mars treat is only available in Australia and even here it is hard to find. After a chance encounter at the checkout of a convenience store, I went in a vain search for another stockist. Eventually I had to retrace my steps in order to repeat the experience.

It’s not for the purists amongst you. There isn’t really any chocolate or any banana. But for those (like me) that love a bit of fake banana, this really hits the spot. Bite into the soft outer coating and through a bright yellow light mouse of fake banana and then let the whole thing rest at the top of your mouth for a good minute as you suck in the sweetness.

Fake things with sweet tastes could also be a description applied to many of the sites on offer at Manly. I took a ferry there last weekend. In 1787, Captain Arthur Phillip of the Royal Navy left England with a fleet of ships to establish a colony in New South Wales. He was to be its first Governor. While exploring Port Jackson, Phillip was impressed by the “confidence and manly behaviour” of a group of aborigines in the northern reaches of the harbour, and called the place “Manly Cove”. (I love this. All naming should be like that.)

Today it is full of people surfing the sea, punching balls on the beach, or drinking beer in the bars. Manly pursuits prevail.

And this is surely the only place in the world where it would be both geographically and anatomically accurate to be labelled a ‘Manly Lifeguard’.

I took in the view and left.

A view I stayed longer with (for 360 degrees in fact) was from the Orbit Bar atop the 1967 Harry Seidler building in Australia Square.

At the brilliant suggestion of Sydney based artist Barbara Campbell, she, Daniel Brine, Jonathan Cooper and I, sat in very comfortable seats drinking a variety of expensive cocktails and eating warm nuts on a rotating platform with fabulous views across Sydney as the sun was setting. (For those people who were encouraging me to do the famous bridge walk: you don’t get to drink cocktails on that and it costs twice the price of my selected Lime and Ginger Gimlet, Nero Sangue, and The Burning Monk.)

We spent far too long giggling about the fact that we were on a moving circular disk 47 floors up. It has always been a fantasy of mine to dine in a rotating restaurant and although we only drank, it was somehow even better that way.

Day turned into evening and after 2 hours we were back to where we started, only it was darker outside.

Unfortunately everywhere we tried for a bite to eat afterwards was closed and we ended up with a burger and fries in Hungry Jacks on George Street. It was a real fall back down to earth.

Another fantasy, though more recently acquired, was the desire to see inside the concert hall of the Opera House, and not just to see but to hear something stirring. On this, my last night in Sydney I treated myself to Mahler 2: Resurrection, a gigantic work performed by Sydney Symphony and conducted by Vladimir Ashkenazy, from which I have just returned.

After you get past the bun fight in the foyers (there are just so many people going to so many different things) you must then resist the temptation to purchase a Sydney Opera House Barbie (oh yes, really). 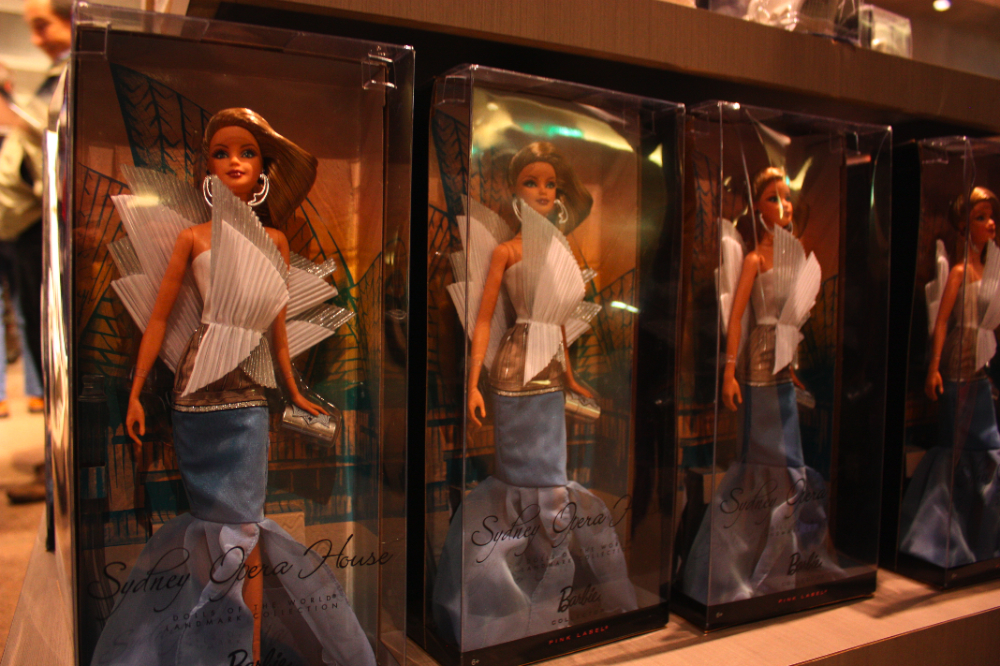 Then you enter the hall, in one of the giant sails. I had selected to sit in the ‘organ gallery’ behind the orchestra so that I could get a good view of the hall and take this photograph for you.

It meant I got a lot of percussion but I like that.

The piece is epic and with the most extraordinary finale. French horns and timpani off stage answer those on stage. A chorus of singers and two soloists are used sparsely but with pathos. I found myself deeply moved by the wall of sound and the ultimately uplifting and affirmative ending.

And now I must go to bed. Tomorrow I travel to Japan, a country which I think about a lot and that I am getting to love even more, each time I go.