For the past days Porto has been preparing for the annual festivities of their patron saint, Saint John, or São João. 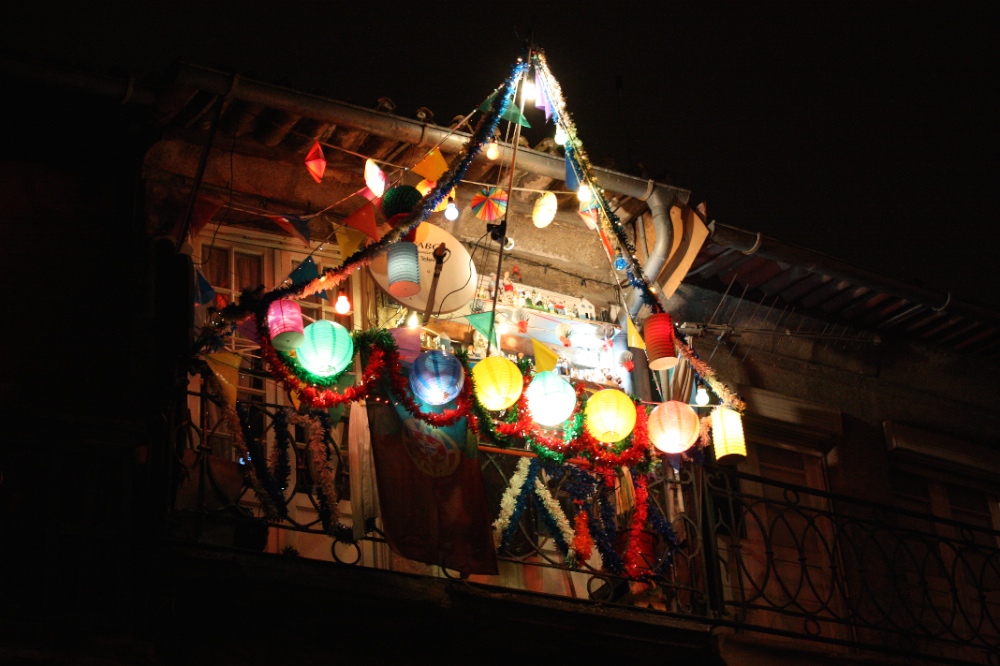 Funfairs, giant screens, and temporary stages with mammoth sound systems occupy the centre of the city. Balconies are decorated.

Pots of ‘manjerico’ or basil bush abound. The tradition goes that boyfriends give these to their sweethearts with love poems. St John is apparently the patron saint of lovers (though when I recount such research details to my hosts they look at me blankly).

Manjerico is one of the icons of São João, with paper decorations of pots of basil strung up in shop windows and between lamp posts everywhere. In the picture above you will notice that a paper basil pot has been stuck into the plant itself, in a kind of absurd repetition of referent and representation. To me this basil looked and smelt exactly like the culinary ingredient you would get in any well-stocked UK supermarket but when I suggested making a salad with these leaves of manjerico I was laughed off as a quaint foreigner. Subsequent internet trawling hasn’t provided any firm corroboration one way or the other. Can anyone tell me: is manjerico edible or not and if not, why not?

…and part of this is to do with a rite that nobody is entirely sure about in which you ward off evil spirits.

Flowering garlic is particularly popular, the white bulbs and long green stems ending in a sphere of purple petals.

The smell off these stalls is pretty heady.

Historically, flowering garlic has been used for the Porto São João tradition of gently hitting fellow citizens on the head. Although its original significance is lost and nobody seems to care anyway, some surmise that it is a ‘good luck’ ritual (warding away evil spirits again) that dates back pre-Christianity to pagan ceremonial. At some stage in the history of the São João festivities, someone randomly decided that garlic was too smelly and that it would be better to use plastic hammers instead. Again it is impossible to find anyone that can remember the switch over. Surely it must be in living memory? Plastics aren’t that old.

So alongside the traditional herb sellers are people selling plastic hammers.

I was notified that this was a festivity must-have (“Now, have you bought a plastic hammer yet?”) and so made sure at the supermarket, while stocking up on other essentials, that a plastic hammer was in my shopping basket. (I thought I was being clever opting for this half-flute-half-hammer but the flute sang not one note.)

In my toilet-humour way, I couldn’t help but read this sign for farturas as ‘fart-your-ass’, which is how it read to me trying to spell out the pronunciation. This schoolboy viewpoint was compounded when I saw them.

Actually these are churros, not ‘fart-your-ass’. Churros are basically the same as ‘fart-your-ass’ only they have fillings and ‘fart-your-ass’ are plain. Either way, they both look like things that you would, erm, fart out of your ass. (Sorry.)

The real celebrations don’t start until the evening and run all through the night until the morning of the Thursday of São João. I met up with NEC Artistic Director Joclécio Azevedo and he took me to a street party of some friends of his. The doors of all the houses in the street were open and people were coming and going carrying various bowls of different foods and drinks. The delicious but impenetrable corn bread, ‘broa’ was almost impossible to cut.

It is thick, dense, chewy and delicious. Amongst the nicest bread I have tasted. Alongside the broa are served barbecued sardines. These are extremely popular and you see these tiny stoves all along the streets. Joclécio told me that he went that afternoon to ‘Media Markt’ (a technology store in central Porto) and there, next to the new televisions and computers inside the shop, someone was grilling sardines on a camping stove. We all laughed nervously imagining the lingering smell on DVD players for months to come.

As the sun sets, one of the nicest activities of São João takes place. People start to send paper ‘hot air’ balloons into the sky. The process is quite fiddly because you (obviously) don’t want to burn the paper. Friends and neighbours gather round to hold out the balloon itself, as someone ignites the flammable resin at its base. You then kind of puff out the balloon waiting until the air inside warms and the balloon inflates. It then rises, magically – alright not magically but rather scientifically – into the night sky.

These balloons have officially been banned by the municipal authorities as a fire risk but that doesn’t stop them from being sold almost everywhere and hundreds of them glittering through the darkness.

At about midnight, after dinner and illuminations, we headed off to the banks of the Douro, fortified by a quick cup of coffee in a late night café. There were throngs of people everywhere. Where did they all come from?

At intervals between Ribeira in town and the beach at Foz people were dancing to the extremely loud music playing from the temporary stages.

If you were hungry, there were plenty of stalls, including this one with a (once) full hog on a spit.

Just in case you hadn’t bought your hammer yet, trucks full of them were being hawked.

If you imagine this to be some sort of excuse for violence then you couldn’t be further from truth. In fact the people doing the most hammering are the oldies, who hammer every single person an arm and hammer length away. One old dear stood by the roadside traffic jam and hammered the cars in the tailback until they wound down their windows. Popping her hammer in hand through the opening, she boinked each of the occupants on the head. That was brilliant. For the younger generations, hammering has become a kind of acknowledgment that you fancy someone, so they are generally much more choosy and there isn’t so much same sex hammering! The thing is, of course, that you end up wanting to be hammered because it brings you into social space and acknowledges your presence. And if it is someone cute hammering you, you are, needless to say, flattered, even if they are doing it for good luck rather than anything else.

So crowds of people hammer each other all night long in what has to be one of the strangest and most unique cultural phenomena I have witnessed.

At about 3.30 in the morning I gave up. The coffee high had subsided and I was rapidly tiring. I walked past the neon hammers back to my apartment where the music pounded through the airwaves, and past my earplugs, from all sides, until well past 6.

The following day I packed up my bags and headed for the airport. I am really pleased to have spent time in Portugal. It is a totally new discovery for me. As a child I had a friend at school whose mother was Portuguese and for many years all that Portugal was in my mind, was a funny language that my friend’s mother spoke. As an adult, it was the literature of Saramago, who died less than a fortnight ago, that gave me some insight into the country. But oddly enough, it was in Asia that I got my first prolonged exposure to Portugal. It was the Taiga historical dramas of NHK broadcasts and the Nanban (“Southern barbarians”) art of 17th Century Japan, both of which document the arrival of the first Westerners at Nagasaki, who were Portuguese, that introduced me to this oldest of European colonial powers.

I also really feel that we have achieved something with Viver a Rua, the project to rename a Porto street after a local citizen. During the 4 weeks that the competition was open, from 12th May to 10th June 2010, we held 6 workshops (with the themes of family, history and citizenship), worked with 20 volunteers in 5 separate actions around the city, talking to hundreds of people, engaging them in the themes of the project; we distributed 30,000 fliers, received thousands of hits on the website and accepted 253 full nominations both through the post and via the internet. The project became a topic of discussion on television and radio, in newspapers, magazines and the internet. It will take some time before a final winner can be announced. The negotiations with the City Hall have only just begun in earnest. But whatever the final outcome, Viver a Rua has been about offering the citizens of Porto the possibility to imagine what the city means to them personally and to think about it as a social space made up not just of the great men and women that have contributed so much but also of the ordinary people, sons and daughters, mothers and fathers, the disadvantaged and the forgotten.

From my own perspective, I have discovered a fascinating and beautiful country; if you haven’t been there I strongly suggest that you go.