There seem to be three different kinds of toilet in Japan:
1. The Western Toilet: sit down on a seat with a hole in it. (You know the routine.)

2. The Japanese Toilet (a): squat above what is basically a urinal turned on its side.

At ARCUS the toilet is no. 2 – The Japanese Toilet (a). I tried squatting above this sleeping urinal with my t-shirt gathered around my chest but I just could not relax as I would like to. Consequently, every time I needed a shit, I would cycle back to my cell, I mean apartment, and use the facilities there. This routine of an uncomfortable cycle ride, which often ended in a ‘no show’, went on for some days, until, by accident, I discovered that there was a toilet type no. 1 directly next to the toilet type no. 2. I should have known. It was not that there was no budget to install Western style toilets, it is simply that a choice should be offered.

While we’re on the subject of toilets, take a look at this urinal installed in a two hundred year old farmhouse. Peeing into this felt like a crime.

Of course, before you use the toilet you need to have some fuel to process. One of the highlights of being here is the food. London is fantastic for food; you can get food from all over the world but when you eat out, unless you know where you are going, it’s a bit potluck. In Japan the quality of food is much more even. Station platforms and the 7/11 sell perfectly good lunch boxes. While priding myself on my wide-ranging palette and genuinely enjoying the subtleties of Japanese cuisine, I have, up until this week, put off trying nattō.

Nattō is the ‘blue cheese’ of Japan. It is basically rotting soybeans. Or put politely: fermented. It is made by bunging some straw on top of the beans and letting them rot. I mean ferment. Everything I had read about nattō had put me off trying it but I decided I should at least give it a go.

This week, we went to visit the Governor of Ibaraki, Masaru Hashimoto for our state ‘welcome’ to Japan. It was a very formal occasion with a lot of bowing and exchanging of compliments and I gave the Governor (who is basically the top dog of one of the 47 prefectures in Japan) a tin of Fortnum & Mason Classic Earl Grey Aromatic Tea which seemed to go down well, especially when I mentioned that it was the tea that Queen Elizabeth drank. We all turned up to ARCUS early in the morning in our smartest suits or frocks and giggled at the change from t-shirts to ties. (Well actually, I was the only one in a tie. Any excuse.) Off we headed in a people carrier to Mito, which is the capital of Ibaraki and also, as it happens, the capital of nattō.

Having sought advice as to which nattō I should go with, the ARCUS staff suggested the ‘traditional’ type, which comes wrapped in a straw bundle, like this:

Looks pretty, doesn’t it? Well we all know what looks can be…

So first you open the straw thing and then you are presented with a, well I don’t know quite what to call it …a cluster of nattō beans. But really the thing that you notice is not so much the look but the smell, which is, well, it’s rotting beans.

Then you put the cluster of beans into a bowl and stir in the sauce that I don’t know what it is but maybe just soy sauce and a little packet of mustard. (I’ve never been so happy to open a sachet of mustard in my life.) You give it a good stir. It becomes all bubbly and sticky and toffee-like only it’s the least like toffee toffee-like thing you can imagine. Then you eat it.

Or at least you try it. Actually it’s not all that bad. I so wanted to like it and was so dreading eating it that the ‘not all that bad’ was a bit of an anti-climax. I just kind of thought, well I could eat this, if I was really really hungry and there wasn’t anything else to eat (in the whole world) but I am not and there is. As Mizuki, the Director of ARCUS said to me the next day: “You don’t have to like nattō. I don’t particularly like it.”

That was before I went to meet with the Mayor of Moriya, Shinichi Aida for my city ‘welcome’ to Japan. It was a very formal occasion with a lot of bowing and exchanging of compliments and I gave the Mayor (who is basically the top dog in Moriya) a tin of Fortnum & Mason Classic Earl Grey Aromatic Tea which seemed to go down well, especially when I mentioned that it was the tea that Queen Elizabeth drank. Hmm, something familiar here. Shinichi Aida was the man who invited ARCUS to Moriya and he is a keen golf player and we talked about St. Andrews quite a bit.

I also went to the most incredible recycling centre this week. The trip had been arranged, at my request, by ARCUS and the Ibaraki government. The centre we visited is only six months old and it is called Sashima Clean Center Teraku. It was truly incredible. I cannot explain how odd it is that the place that deals with 51 tonnes of garbage a day is, without any doubt, the cleanest building I have ever been in, in my entire life. When you go into Sashima Clean Center Teraku, the first thing you do is remove your shoes and put on a pair of slippers. 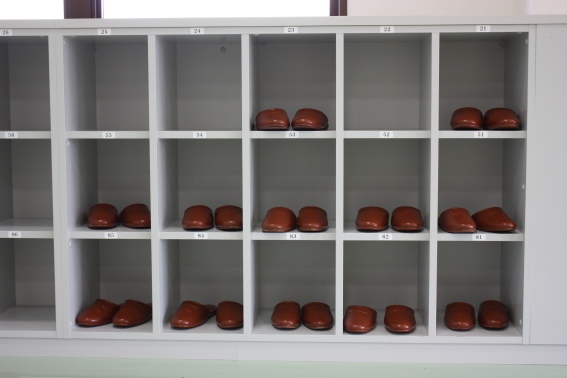 You then walk around the cleanest building in the world, which is being cleaned as you walk, thinking that if you did drop your ice-lolly on this floor, you wouldn’t hesitate to lick up every last drop from the disinfected vinyl flooring that you are slippering along. They must think we are such dirty animals when the Japanese come to London.

The centre is very staff efficient with only around 27 employees working in the incineration bit and a similar number in the recycling bit. That’s about a tonne of garbage per person per day. There are huge double glazed windows onto the ‘tip’ bits, in which giant cranes are operated by one man in an office and a couple of people at computer screens.

The crane thing manipulating the tonnes of garbage and putting it into the furnace was like watching an opera. The whole thing was awe-inspiring.

They sell energy back to the grid and recyclable materials onto manufacturers. The whole architecture of the building is geared towards showing the public what is going on and to education about recycling, including several workshop rooms where classes are held for working with recycled materials.

Machiko from ARCUS introduced me to the word ‘mottainai’ which is kind of the shame you feel when you have wasted something. The Kenyan environmentalist Professor Wangari Maathai, who was awarded the Nobel Peace Prize in 2004, has promoted the concept of mottainai as a term that is roughly equivalent to the English phrase ‘Reduce, Reuse, Recycle’. Here are the links that Machiko sent me, for those of you that are interested, including a rather catchy mottainai theme tune sung by some cute Japanese kids.

After the breathtaking (and very clean) trip to the recycling centre, we went to the city council to make the official request for my project. Yes, this is the one where I want the entire unburnable rubbish collection for one day from the city of Moriya delivered to my studio. (OK, so it’s not quite as simple as that but that’s the gist of it.) They listened and they really got the concept but they estimate that one day of unburnable rubbish from the city of Moriya will be over 20,000 bags and up to 40 tonnes. Given that I’d just seen what 50 tonnes looked like, I didn’t really fancy having to wade through 10 tonnes less. I could see the rest of my time in Japan being spent washing 40 tonnes of rubbish in a warehouse on the outskirts of the city. Anyway, they are thinking about what it really means. Obviously there would have to be a massive team of volunteers to help, so it might not be possible even if the project is given the go ahead. So, I’m working on scaled down versions.