In the next in our series of blogs about The Rubbish Collection, Project Curator Sarah Harvey looks back at what we have collected and reflects on what Phase 1 of the exhibition has taught us about our relationship with waste.

Thirty days of sorting and documenting all the Science Museum‘s rubbish have come to a close. It’s been surprising, sometimes shocking and certainly thought-provoking, fun, hard work and, at times, a little bit smelly!

We’ve documented all the rubbish produced by the Museum’s 281,647 visitors, 500+ staff and contractors, five cafés, two building sites, three shops, two Science Nights, one Lates event and several storage cupboard clearances. We’re still waiting to see the figures but, it’s safe to say, it was a lot of rubbish. 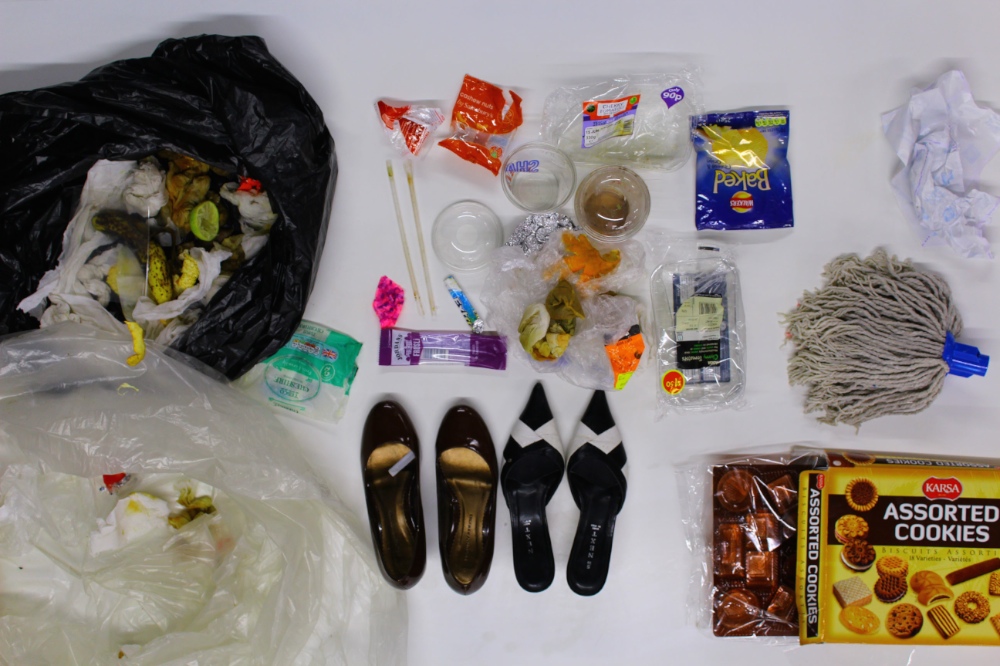 Over the thirty days, artist Joshua Sofaer, his assistants and the Science Museum volunteers, along with hundreds of brave visitors eager to take up this unique opportunity to get up-close and personal with the trash, have rummaged tirelessly through approximately 250 bags of rubbish per day.

Along with the expected items like crisp packets, drinks cans and the remains of thousands of kids’ lunch boxes, we’ve also found some more unexpected objects hidden amongst the detritus of everyday museum life. 16.5 pairs of shoes, two two-piece suits, a bra, three fridges, one dishwasher, a box of old floppy disks (visiting school children didn’t know what they were), piles of discarded over-the-counter medicines, three wheelchairs and a staggering volume of disposable cutlery.

Uneaten fruit in Phase 1 of The Rubbish Collection © Science Museum

So, what have we learnt from all this investigating and documenting? Aside from the revelation that kids don’t eat the fruit in their packed lunch (one day I’ll count the number of untouched apples we documented), the most obvious thing is that we don’t recycle as much as we could.

Over the last few months the Science Museum has been working hard to put new systems in place for separating our rubbish both in public spaces and offices. The addition of recycling bins in public areas is a long overdue step forward for the museum but we found that almost all recycling bags in public areas were contaminated with non-recyclable rubbish, so we need to do more to encourage and help visitors to recycle while they are here.

The amount of recyclable material lost to incineration because we are not yet separating café waste is a lot more than we would like but there are plans in place to roll out new segregation systems to all the museum’s cafés in the near future. Just separating out the café food waste could reduce the museum’s general waste tonnage by around a third.

Whilst the documentation was taking place in the museum, behind the scenes we’ve been doing some detective work to find out where and how those materials are processed and what they go on to become. These days, very little is lost to landfill so most of the rubbish that left the museum has been transformed into some other physical form, either through recycling or through incineration.

That transformed rubbish is now travelling back to the Science Museum, to be reunited with some of the most interesting items we retained from the bins. Over the next 10 days, Joshua Sofaer will be creating an exhibition showcasing what is produced from our rubbish, examining the beauty and value of the materials but also looking at the sheer volume that was produced over one month. The exhibition will open on 25 July but if you want a sneak preview before then, make sure to watch this space…

The Rubbish Collection continues with Phase 2 from 25 July to 14 September 2014.