The story goes something like this: After long years lost in the mists of legend, the Gold Nose of Green Ginger is returning to Bransholme. 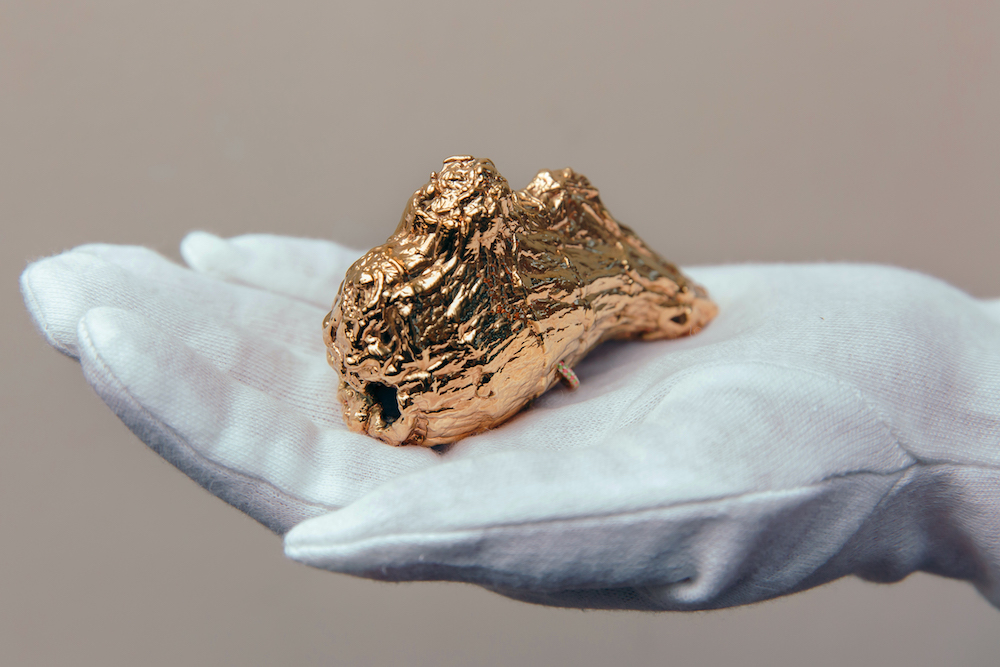 2017 marks the 50th anniversary of the Bransholme estate; Lord Mayor Alderman R W Buckle officially opened the first houses on May 1, 1967. In the excavations made to lay the foundations to build the houses, one of the team of builders unearthed a small casket. Prizing open the lid, he discovered a strange, unknown gold object in pristine condition, and so the Gold Nose of Green Ginger, as it has now come to be known, was discovered.

The Gold Nose of Green Ginger looks like a ginger root, roughly in the shape of a wizened, warty nose. It has two ‘nostrils’ and two braided silk ties which indicate that it was worn, perhaps in some kind of ceremony.

Archaeologists do not know for sure what the object was originally used for, its source, or how it ended up in Bransholme, but laboratory analysis confirms that it is made of real gold. Some believe it was transported to Hull on cargo ships bringing spices from the East. Others tell a story about the wild boar that used to roam around the marshes and forests that now form Bransholme (the name Bransholme comes from the old Scandinavian phrase meaning ‘wild boar water meadow’). Wild boar forage for food, and it is said that a one such animal unearthed this gold root. A variation of the story says that the boar had special powers and turned the root gold. Wherever it came from, many believe that the Gold Nose of Green Ginger brings good luck, and by bringing it back to Bransholme we hope to bring luck to the area.

There are societies throughout history where a focus on the human head and the senses have been particularly important. In some respects, The Gold Nose of Green Ginger is similar to the pair of eyes beaten from a sheet of gold that were excavated in 1970 from the Roman city of Wroxeter, Shropshire. The gold eyes are thought to have been a votive offering to the gods from someone seeking a cure for an eye disease; perhaps somewhere in the world there was a similar culture devoted to the nose.

The Gold Nose of Green Ginger will be handed back to the City of Hull for safekeeping in August 2017. Before then, this temporary residence in North Point Shopping Centre allows the people of Bransholme to see it at close quarters.

Get Creative!
Thursdays, all day, drop-in
A different creative workshop each week.

Lunchtime Concert
Fridays, 1-2.15pm
From classic to pop, interrupt your day with some live music.
In association with North Point Shopping Centre.

Afternoon Tea
Saturdays, 3pm
Pop in for a cup of tea and a nose biscuit.
In association with Fergusson Fawsitt Arms based in Walkington.

All events are FREE.

ACCESS INFORMATION
The ground floor spaces of The Gold Nose of Green Ginger, where the majority of activity takes place, are all wheelchair accessible. A small part of the experience is located on the first floor, which is up 16 steps; a member of staff will be available to assist if needed.

A touch tour and workshop for visitors who are blind or partially sighted will take place on Thurs 29 June at 10am.

This pamphlet is available in audio format. Please ask The Gold Nose of Green Ginger staff for a copy if required.

To book a place on any of the above sessions or to discuss your access needs, please contact info@goldnose.co.uk or Elizabeth on 01482 318951.