I am in Sydney.

From the moment you step onto the Quantas flight you are aware of the Australian way. Faded surfers in butcher’s aprons offer you beer and ice-cream and encourage you to relax. But the famous ‘take it easy’ Australian sensibility belies the worker-bee ethic of many of those active in the cultural sector that I have met in my first week here.

There is one very immediate difference between the cultural sector in the UK and Australia: here people want to make time for you. They are keen to talk. This is lucky for me as the main activity that I am tasked with is talking. I have over 30 meetings booked in already, with more being scheduled.

I am ‘Thinker in Residence’ at Performance Space in Sydney, a cross-disciplinary arts organisation based at the incredible CarriageWorks in Redfern. Here under the auspices of being the first ‘Artist Fellow’ on the Clore Leadership Programme, I am exploring what it might mean for artists to be leaders. It is a research trip of sorts, meeting with key cultural players on the Sydney scene, discovering how they work with artists, and learning about the many ARI (artist run initiatives) that abound here.

There hasn’t been so much time to ‘site see’ but on the Saturday after I arrived, the Director of Performance Space, Daniel Brine and his partner Jonathan Cooper, took me to Sydney Fish Market to buy our dinner. The market consists of a series of shops selling, well if not quite every possible thing from the sea, then at least the ones that you might want to eat.

The oysters looked particularly good and so I bought half a dozen as a contribution to our meal. Pretty much everything in Sydney is unaffordable. The Australian dollar is so strong against sterling, you feel pinched just buying a bottle of water. But this was the exception. Oysters are cheap. In fact you can get 3 large oysters for the price of 1 small bottle of mineral water.

The thing about (good) fish markets is that they smell of the sea, not of fish. The fish is all so fresh that there is none of that nasty rancid smell that you get if you open a supermarket container of out-of-date tuna. The Sydney avifauna know where to come for scraps however. Giant handsome Pelicans waddle around the carpark. 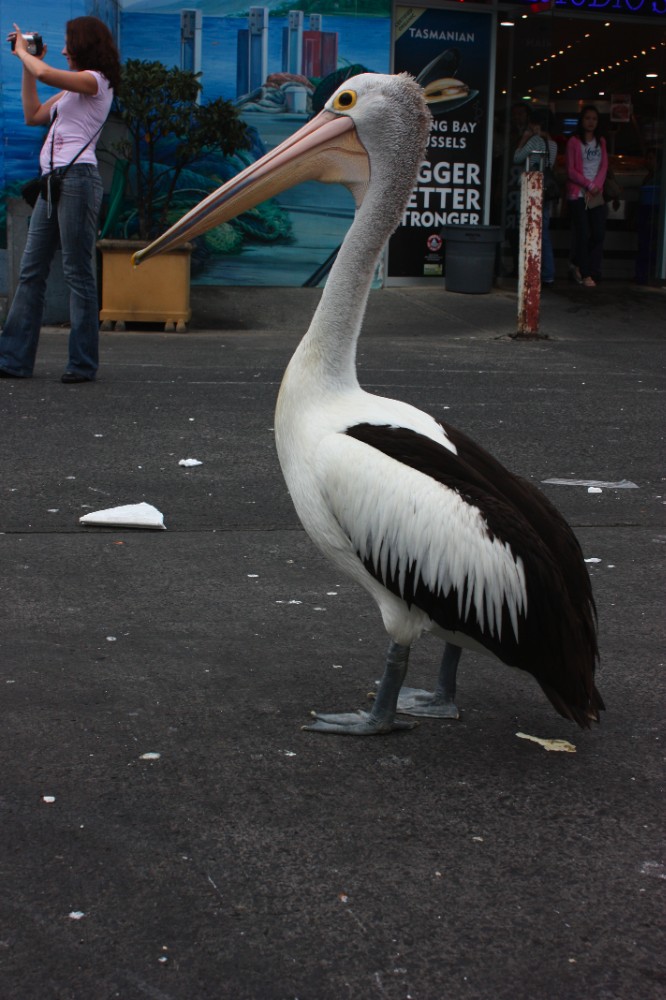 And these Ibis (the pigeons of Sydney apparently) stick their long beaks into the bins. I think they are after the dinner leftovers from the market restaurants rather than the entrails of salmon gutted for squeamish cooks.

Daniel bought Morton Bay Bugs (the very ones being bagged in this picture). They are a kind of antediluvian cross between a giant prawn and a legless lobster.

And they are delicious. Daniel prepared them with green peppercorns, a cream sauce and a pastry crust. They taste, well, somewhere between a prawn and lobster I guess.

Performance Space works out of CarriageWorks, a conversion of a former railway carriage and blacksmith workshops. The building retains many ‘original features’ as an estate agent might have it, but has now several substantial theatres, rehearsal rooms, gallery spaces and workshops.

It also (this is very exciting) is home to the largest glitter ball in Sydney. Look: it’s got it’s own special cradle trolley thing.

CarriageWorks is lovely to look at but I can’t help thinking that the architecture is a bit stifling for Performance Space, an organisation whose stated aim is ‘the exploration and experience of new forms, new ideas, and new contexts’.

On Wednesday 2nd everyone in the CarriageWorks offices gathered round a giant television for the Melbourne Cup, “the race which stops the nation”. The assembled crowd pays $2 (could buy you a couple of oysters but not a bottle of water) and draw horses names from an envelope. One of mine, Illo (surely a bad name for anything, let alone a potential champion stallion) was well out in front for the first three-quarters of the race before coming in second last.

In the end it was a photo finish, the result of which took 3 minutes to come through from the race officials. It was a bit of an anti-climax for the staff of CarriageWorks as one lucky guy had drawn both horses that were battling to be a nostril ahead. Here is the photo of the winning moment.

Several of my meetings have taken me down to Circular Quay and Sydney Harbour, the iconic meeting of land and water and of some of the most famous architecture in the world. Sydney Opera House is magnificent. It has that sense of ‘coming home’ the way the skyline of New York does. It’s just so familiar from its reproduction in film and news that you feel like you already know it. What I felt about it, staring across the bay, was that it defied time. It is both a kind of prehistoric monument, a giant carapace left on the shore, but at the same time of the future, visiting from a more advanced universe. One thing that I had never noticed before in reproductions is that it is scaly. The ‘sails’ as they are known, are like a giant jigsaw puzzle of scales.

Opposite the Opera House is Sydney Harbour Bridge. Nice. Fits in well. But I still feel loyal to the Ponte D Maria Pia designed by Gustave Eiffel for the city of Porto. If you look closely at this picture you will see people on the ‘bridge climb’. I’ve been asked several times if I plan to do this. My response has been that I would do it with a new found love. It is very expensive. Besides which, no Sydney-sider that I have spoken to has ever done it themselves.

On the way to a meeting at MCA (Museum of Contemporary Art) which is located right on the harbour edge, I could not fail to notice that the Rhapsody of the Seas, an immense cruise ship, was moored by the International Passenger Terminal.

Perching on a motorised dingy, starboard side, with nothing but a standard DIY roller, some poor chap was tasked the challenge of painting this floating city.