On the return to the UK from Taiwan I decided to take advantage of the fact that I needed to transfer in Bangkok and to explore Thailand for a couple of weeks. Thailand is everything you hear about it only more so.

Back in London looking at the photographs that I took of temples, palaces, urban sprawl, and mountain retreats, I realise that I have created an album of mediocre tourist images of the great sites of Bangkok and Chiang Mai that could form part of a travel guide: nothing to write home about.

There is however, one set of photographs that I want to share, taken of a pair of glass vitrines in The National Museum Bangkok. Situated in the former Palace of the Front or ‘Wang Na’, constructed in 1782, the museum is sited in a series of different buildings around the palace compound. It is a municipal organisation lacking money and although there are incredible objects around almost every corner, the displays are often dated and dusty.

In these two vitrines however, the cramped conditions and neglect add to their charm.

Despite being the nation’s repository for Thai culture, these two cases in fact house objects of a different origin; they present a collection Chinese puppets. The label reads as follows: ‘These small puppets wearing Chinese Opera costumes were used in the performances of Chinese music dramas. The puppets were manipulated from the inside. They were created by Krom Phraratchawang Baworn Wichaichan (the third reign) for the performances of Chinese stories in the middle of the 19th Century.’ At first I presumed that this wording identified the craft person as Krom Phraratchawang Baworn Wichaichan but on further investigation and going back to the Thai language, I can see that กรมพระราชวังบวรวิไชยชาญ (more commonly translated into English as Krom Phra Ratchawang Bowon Wichaichan) was a Siamese Prince and the last Viceroy (or Deputy King) of the Palace of the Front. So I presume that these puppets were imported for his entertainment rather than made by his hand.

Whatever their birthplace, I found the characters in these cases captivating.  So many faces staring out from the crowd, curiously peering back at you as you stooped to look.

I had a strong sense that these effigies had souls. It wasn’t so much the ‘Toy Story’ scenario that they have lives only when our backs are turned, but rather that they are animated even in their stillness.

Even without knowing any of the Chinese dramas for which they were created, there was an immediate sense of the narrative encounters between different individuals. 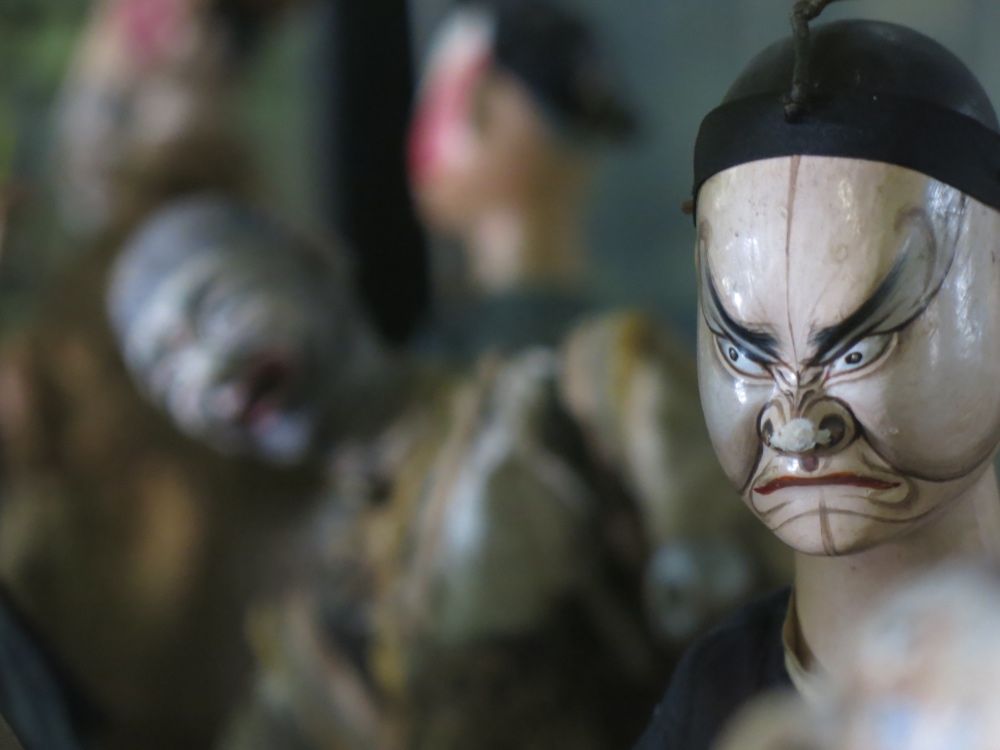 I spent a long time with these guys and was sorry to have to say goodbye.