Here I am in the land of football, soap operas, cars and coffee; literally in the latter case, as my companion Goh and I, are staying in a small but well-appointed studio in the lower level of a private house in ‘Cafelândia’.

Coffee Land is in Sumaré to the west of the centre of São Paulo, Brazil’s megalopolis and the 7th most populated city on Earth. We have this studio for few days while we find a base for the next two and a half months. Sumaré is a very safe neighbourhood, we are continually told. (I don’t know whether this is despite or because of the 24-hour security guards stationed in booths – think portaloo with windows – along the street.)

I am here as part of the British Council Artist Links scheme. Artist Links offers time to develop creative practice while working in another country. It is not an exhibition programme and you are left pretty much to your own devices. My project is to pick up on some of the work I was making in Japan last year, which focussed on waste collection and disposal.

As I have discovered during this first week, rubbish is everywhere in São Paulo, on lips as well as on the streets. Key to the discussion (and collection) of rubbish are the ‘catadores’, or ‘human scavengers’. The catadores have a vital but nevertheless ‘informal’ relationship to the city’s waste system and counterpart the official government run or privately contracted collection and disposal services.

It doesn’t take very long before you see catadores, with their trucks and dogs. 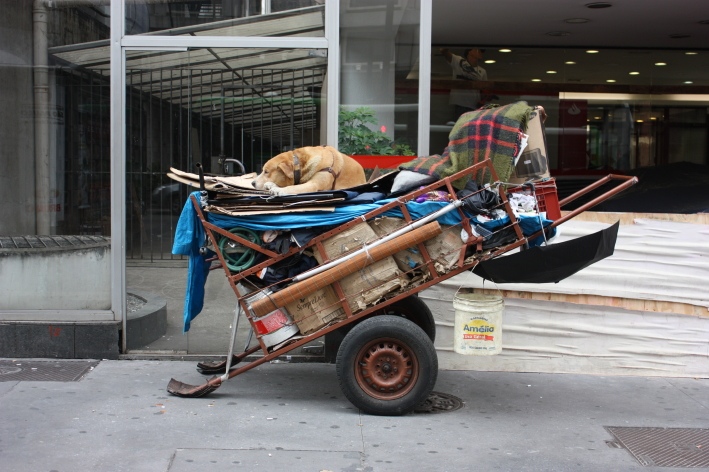 Estimates vary but even a conservative figure of 300,000 catadores in Brazil, indicates how many people are working in this way. There are 84 catadores cooperatives in São Paulo state alone, handling over 700 tonnes of scrap each month.

And while the catadores pull their trucks in this city of contrasts, everyone else is driving, or rather trying to. São Paulo does have a public transport system but the Metro only covers a tiny proportion of the centre of the city. There is no rail network at all. In the 1960s the government decided to let the railway decline in favour of the American model of a city of motorways. The result in a city with millions: gridlock.

The city authorities have tried a bunch of things to try and reduce congestion including a rotation scheme banning drivers from using their cars one day each week. The consequence however, is simply that people who can afford it buy another car, meaning that there are more, not less, cars on the road.

Road rage rules. The Brazilian version of the Highway Code is thrown out of the car window and into the gutter. No wonder there are accidents. We saw the results of a really nasty four-lane-tumble round the corner from Cafelândia.

And so someone’s catastrophe becomes the object of our curiosity.

Pedestrians have almost no rights. Zebra crossings are purely decorative and traffic lights, like festive colours, have a vague signification without ever committing to a definite meaning.

There seems to be a constant tug of war, a push or pull in opposite directions. Take busking for example. The other day we were walking down the Avenue Paulista, one of the main thorough-fairs in the city. On one side of the street there was a young urban dance troupe strutting their stuff to incredibly loud dance music…

…while on the other side a band of young players, dressed in their smart red uniforms with gold braid, were working through their repertoire with the visual accompaniment of a velvet and sequin clad gymnast performing alternately with a ribbon, hoop or clubs.

As the audience of the band strained their necks to listen to a groovy arrangement of Gruber’s ‘Silent Night’ and the velvet gymnast waved her ribboned wand (a cultural conglomeration that was already odd enough in itself) the urban dance group pumped up the volume, just six lanes of traffic away. And so the stille nacht became a musical battleground, with the conductor of the band widening his arms to encourage a crescendo. Not to be outdone, the dancers took advantage of the gridlock to make their way over to the band’s side of the street and began dancing just meters away to their own rhythm. Meanwhile the ribbon twirls became more frenetic. As observers, we didn’t know quite which way to look.

And after one week, it is this diversity, this upfront feistiness that makes Brazil so terrifying and exciting all at once. All of life is here in this city of abject poverty and extreme wealth. In the space of just a few hours I had visited a catadores rubbish deposit and had a delicious cocktail in watermelon slice Hotel Unique.

Was it unique? Well no, not really. It was just another luxury hotel with a fancy bar on the roof. But the context and contrast of Brazil does feel unique. It is a thrill and a privilege to be able to experience so many different aspects of one culture all at once.