Born on my 5th birthday, my younger sister and I have always made an effort to spend 1st August together. This year was no exception. The difference was that she had just moved home and was rolling around in her oversized Roman appartamento which badly needed some furniture.

Spending your birthday traipsing around furniture shops in 39 degree heat is perhaps not the most pleasant of days but I was very happy to be of help and to be fed Italian food from a few of Esther’s favourite haunts.

There is something extremely satisfying about having your ‘baby’ sister, who you used to piggy back around the playroom, take you to an Osteria and order you her suggestion in fluent Italian. At Le Mani in Pasta we both had the Vernaccia. Vernaccia refers to the white grape used in Tuscan wine, in which the pasta is cooked with truffles and pancetta. Absolutely delicious.

After that we went for a walk along the river and had a granita from the famous riverside stall. I chose melone.

Another iced treat the following day (our actual birthday) was at my sister’s local gelateria, Tony’s, where as well as gorging myself on some creamy fruit flavoured ices, I picked up a couple of spoons for my ever-growing collection of disposable ice-cream spoons.

Here is a small selection of said collection, arranged as a colour circle:

One thing that I noticed were the number of ice-cream deserts in freezers in Tony’s: ice-creams on sticks covered in chocolate, ice-cream balls, profiteroles, things that looked a bit like buns but that nevertheless had ice-cream in them. Well, it’s an incentive to return!

In the evening we went to the local pizzeria, La Gatta Mangiona. I know that these don’t look particularly impressive but even this Neapolitan style family run restaurant in a residential part of Rome achieves a taste which far exceeds anything that I’ve had outside of Italy.

It’s amazing that a simple dough base with tomato puree can be so tasty. 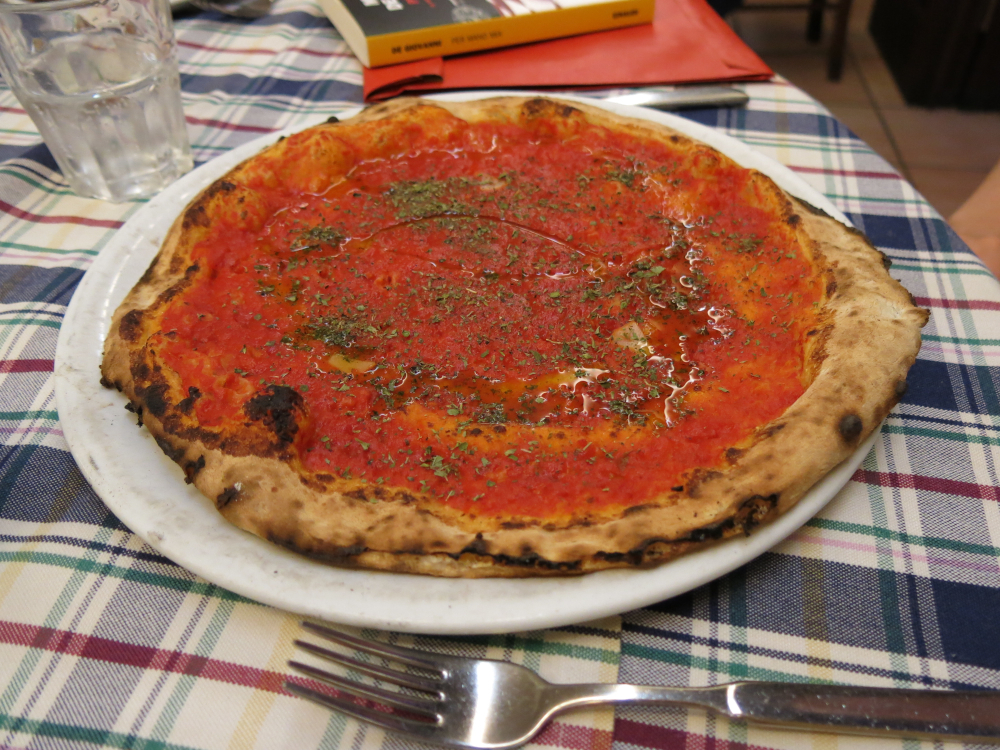 The rest of the time on this super short 2 night trip, we ate at home. Mostly we consumed fresh fruit and vegetables bought at the nearby market, San Giovanni di Dio. Everything is very seasonal, which means that nothing is ‘forced’ and therefore far more flavoursome.

In the tour around the furniture shops of Rome, I did get to see some interesting city sites. This covered piazza has the most incredible roof.

And the walls are painted with elaborate rococo style motifs. This was a new discovery for Esther too, and we haven’t yet worked out where exactly it was.

On the way to one store in Via Panisperna there was this ‘hanging garden’ effect running across the street. Interesting.

And in Mercatino Usato, Monteverde, which as far as I can gather is a shop where people go to sell things they no longer want to other people who might want them, I bought this great ceiling light (I had been looking for something like this for ages) for an amazing €8! (My sister did get some furniture for her barren apartment as well.)