River Crossing: I want to communicate with you invites individuals to submit nominations to rename the public docks in Sacramento and West Sacramento

Call for Nominations
River Crossing: I want to communicate with you gives individuals the opportunity to nominate someone to be commemorated by having the public dock in Sacramento or West Sacramento named after them. During the nomination period from May 25, 2019 – July 10, 2019, submissions are invited from all over the world, with a focus on attracting nominations from Sacramento and West Sacramento.

In order to nominate someone, individuals must provide their personal information, the name of their nominee, and a brief, written explanation why their nominee should be chosen. In August, a panel of judges consisting of well-known representatives from both cities will meet to choose two winning names, one for each city. In November, there will be an installation of light boxes which will spell out the names of the two winning individuals in maritime signals. The light boxes will be installed on each dock with a celebration to honor the individuals. 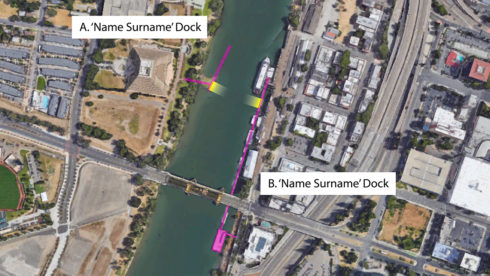 River Crossing: I want to communicate with you is a participatory public art project developed by British artist, Joshua Sofaer. Sofaer is working with a creative team based in Sacramento and West Sacramento for all aspects of the project including project management, design, outreach, fabrication, and installation of the lightboxes. As part of the promotion for the nomination period, there will be an exciting animation released which is created by local graphic designer and illustrator, Benjamin Della Rosa and narrated by well-known Sacramento native, actor, and literacy advocate, LeVar Burton.

Funded by the National Endowment for the Arts, this project is part of the City of Sacramento’s Arts in Public Places Program and is supported by the cities of Sacramento and West Sacramento.