The pleasures of working away from home, of seeing new places and meeting new people, are always counteracted by the problems of continually starting ‘afresh’; the lack of routine, negotiating new sets of kitchen utilities, homesickness. Actually, I think my particular ‘homesickness’ is a kind of sickness of being at home. I don’t know how else to explain the fact that I am more often away from mine than in it. This sickness, a friend confided in me, is what Alcoholics Anonymous call “geographicals”. You keep moving in order to escape facing up to the ‘real issues’. Well, I’m not so sure. All my ancestors kept moving. No more than two generations were born in the same place as far back as we can trace. I myself was born somewhere I only stayed for a year and grew up in a city (the Scottish capital, Edinburgh) where I always felt a stranger. Nature or nurture, maybe I just have the nomad phenotype. Or maybe I’m just practically responding to job opportunities in the niche market of ‘socially engaged interactive contemporary art practice’. I feel very lucky to be living (and making a living) in this way but nevertheless there are practical hurdles that need to be jumped and emotional demons to be faced.

Over two weeks into my stay here in Porto and the laundry needed to be done: urgently. Although the plumbing is very neatly in place, there is no washing machine in my apartment. My fantasy of stringing up my t-shirts and towels on the balcony, Mediterranean style, like my neighbours, will have to wait. (Not that I even have a balcony.)

With only one pair of pants left on the clean pile and after several meetings with the NEC production team to discuss alternatives (I’m afraid I refused to hand over my smalls to the Production Coordinator Mafalda Couto Soares despite her generous offer) it was decided I should try and find a launderette. The thing is, there are no coin-operated washing machines here in Porto. Everyone has one at home. There are laundry services but they are for the lazy wealthy rather than the disadvantaged poor. Generally they are for people who ‘send their shirts out’ or who need a carpet cleaned and they don’t know where to begin.

After a preparatory phone-call from NEC Executive Producer Joana Ventura to check that they would ‘handle my load’ by weight rather than charging me for each sock, we set out to Lavandaria Olímpica in Rua Miguel Bombarda, the street with all the commercial galleries.

From behind the counter we were met by Dona Maria Sousa Neto, whose brilliant white business cards were housed in a special container. I left €20 lighter.

When I returned the following day I was thrilled by the multi-coloured stratigraphy of my sweet smelling perfectly folded clothes.

Unlike my laundry, my workload here in Porto is unusually light and I have too much time to think. There is some ‘work’ to do everyday, which means I can’t really leave the city but nevertheless there are huge stretches of time that I have to occupy either with ‘other work’ (there’s plenty of that) or finding something else to do.

On Sunday I went for a walk to the Atlantic. Two hours in, under the blistering sun, I saw in the distance along the beach what at first looked like the zigzag of giant bunting. Was this an art installation? No, it was washing pegged out to dry from the communal laundry at Afurada: Lavadouro Público da Afurada. Outside Porto, clearly not everyone has a washing machine. Around a series of giant square stone basins women pounded their families’ linens. No coin operated slots here either, then. It all looked like something from Ancient Greece or Rome but according to the sign on the door, this communal laundry was in fact only set up in 2003. Perhaps it replaced an earlier facility.

I was temporarily caught up in the romance of this communal clothes-washing scene. I too wanted to wander down to the beach in the bright spring sunshine to pummel yesterday’s t-shirt. But then I thought of Dona Maria Sousa Neto and my multi-coloured sweet smelling stratigraphy and felt envy no more.

The clothes themselves are pinned to makeshift lines all over the esplanade and right down the beach. 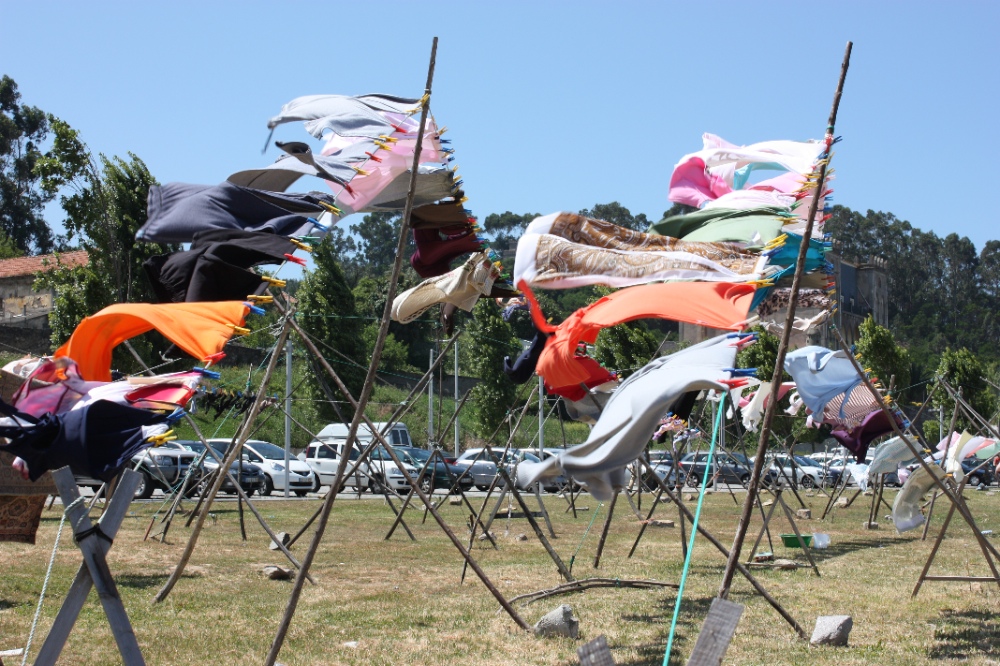 As well as being a wonderful site, it is immensely practical. With strong Atlantic breeze and the bright sunshine it takes about 3 minutes for things to dry. You start your pinning and by the time you’ve finished you barely have a moment for a cup of tea (well here it would be coffee) before you go back to the start to take them down. Of course the strong wind is also a hazard. How many trousers and t-shirts have been consigned to the tides, I do not know.

Another difficulty of being ‘away’ is what to do in the evenings. Somehow this is tougher when you’re not in your own home. My relatively new Sony eReader (PRS-600) with its 130 free books is proving immensely useful and I’m getting through an awful lot of novels without risk to trees. But I do struggle with not feeling like a complete twit out on the town on my own at night.

On the way back from an artists’ salon event in someone’s living room last night, which, while enjoyable, was slightly disappointing in its lack of liquid refreshment, I decided to stop off at café and have a beer. Sitting at the counter on a bar stool I enunciated ‘cerveja’ as confidently as I could and was rewarded by a tall glass of ice-cold Super Bock (the leading Portuguese beer, launched in 1927). The thing was, that although the beer was cool and smooth, I was not. I felt like a poseur. Stopping off for a quick beer is just not something that I do, or at least if I do, I don’t get away with it.

Back home then to eat some more fruit. I’ve been doing a lot of that: going home and eating fruit. I have discovered nêsperas, which are abundant here in spring.

I think they must be grown locally but according to what I can discover online they originate from China and Brazil. Anyway, they are delicious. The flavour is intense, like an apricot, nectarine, lychee and apple combination. I’ve been peeling them because the skin slips off and is a bit tart. They have stones that look like a pair of well-rounded bronzed buttocks.

We continue to promote Viver a Rua and the nominations are steadily coming in. This week marked the beginning of FITEI 2010 and our series of public actions. An army of volunteers are acting as Public Communicators for the project. There are about twenty people on rotation. After a day of workshop exercises and tryouts, this band takes turns to tackle the people of Porto, raising issues of citizenship, pride and responsibility and, erm, trying to persuade them to nominate somebody.

I can’t promise a new one each blog but these do seem to be very popular here in this mountainous country. This one is the city funicular in Porto – Funicular dos Guindais – that runs from Ribeira (by the bank of the Douro) up into town. The brilliant thing about it is that it is integrated into the city transport system, so although it may well entice tourists, actually it is just a very convenient and cost effective way of avoiding a steep hill or an awful lot of steps.

As you can see, it looks more like a rollercoaster track than any form of public transport.

The views are, however, gorgeous.