Taiwan is not a country. It is an island (albeit by far the largest and most populous) of the Republic of China. No, not the People’s Republic of China that we think of as ‘China’ in the West, but the ROC.

The strange and often troubling history of Taiwan is something that I knew next to nothing about before being invited to work here. I knew that it had been colonised and occupied by various ‘powers’, the Dutch and the Spanish (as Formosa), the Chinese, and the Japanese, but what I didn’t know is that when the Communist Forces took control of mainland China in 1949 and established the People’s Republic of China (PRC), the ROC resettled its government in Taiwan. There is still (in principle at least) a territorial dispute between ROC and PRC with both countries claiming the other is illegitimate. Given the political impasse, most of the world switched diplomatic recognition from ROC to PRC, so that not only is Taiwan not a country in name, but it is also not recognised as a country by any other that opts for the PRC as the ‘true China’.

The much exalted (though still controversial) man who brought the ROC government (and the best pieces from the Imperial collection of Chinese art) to Taiwan, was Chiang Kai-Shek, whose giant Memorial Hall occupies a central location in Taipei. Officially opened in 1980 on the 5th anniversary of the death of CKS (as he is abbreviated), it has a twin set of 89 steps, to mark his living age.

As this scale model shows, it was with a combined tribute to both CSK and ‘the arts’ that the propaganda tacticians of the late 1970s built both the National Theatre, and the National Concert Hall in the same giant square. Every time the Taiwanese go for cultural enrichment they are reminded of their former leader.

Although ‘modern’ these are the largest examples of classical Chinese architecture in the world.

It is a popular place for outdoor ‘rehearsals’ by young theatre and dance troupes.

Inside the Memorial Hall itself, there are huge photographs of CSK and his family, with entirely flattering descriptions of all that he did. My particular favourites were the giant glass vitrines allotted to his dress: his slippers, vest (for when it is cool in Autumn, the sign helpfully informs us), and his neatly folded handkerchief. In a way, this folded linen square on its outsized pedestal begs questions about the value accorded to material culture that I have been pressing in my art practice over the last few years.

On the way out, you have the chance to see CSK himself, stuck ‘in exile’ at his administrative desk. 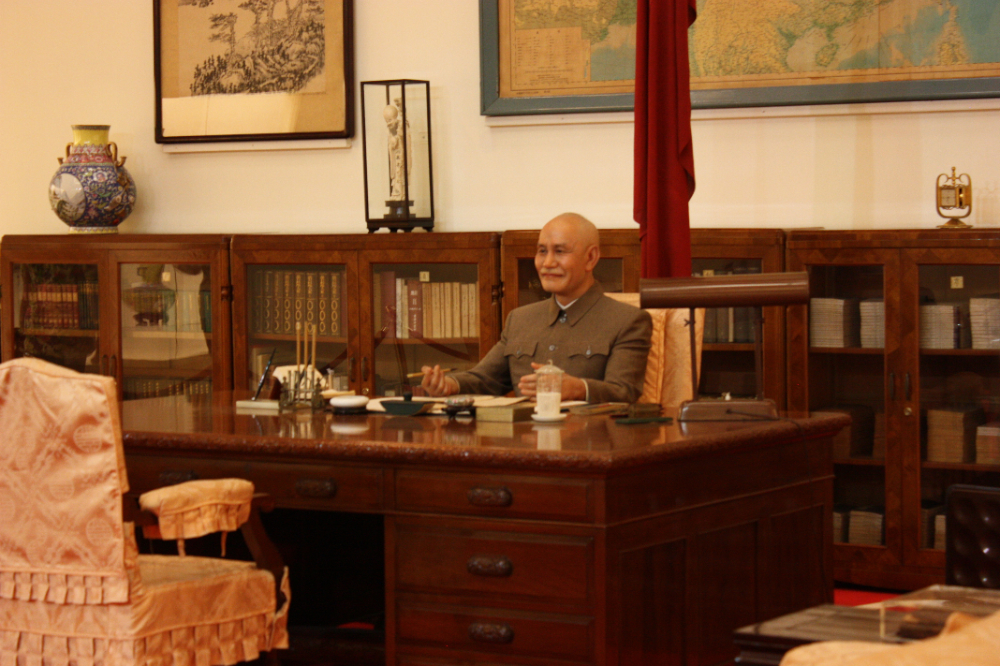 I am in Taiwan for a few weeks to discuss the possibility of a new commission here, run a workshop with local artists, and to give an artist talk. According to one banner, at least, I am ‘the’ talking artist.

If I am to develop a work for Taipei, then I am keen to understand the city better. There is certainly plenty to see an do. Of vital importance for any single traveller (by which I mean unattached rather than simply traveling alone) is Xiahai City God Temple. It may be small but it is one of Taipei’s most venerated places of worship, mainly because of the Matchmaker God who is believed to find you your ideal partner in less than six months.

A constant stream of (largely) beautiful young women shake incense vigorously in front of a 43cm high image of an old man with a beard. I made my request silently.

In an adjacent room the Wife Goddess is left pretty much without disciples. She blesses marriages. Perhaps the Matchmaker God is doing such good work that there is no need for any further blessings. According to my guidebook, the temple claims that 9,316 couples got married in 2008 alone thanks to the Matchmaker God’s help.

Outside you can hydrate with a cup of cupid’s tea. The translation is unambivalently confident.

Xiahai City God Temple is located on Dihua Street, a series Chinese Baroque style shops and houses many of which survive from the 1920s. Pharmacies, delicatessens, grocery stores, many selling things I found completely unidentifiable.

I had mentioned to my host that I was keen to try Taiwanese tea. Juan Chin took me to Wistaria Tea House, a historical centre of liberal education and debate, which also sells the most delicious tea. We tried several types prepared in different ways.

Accompanied by this delicious mung bean cake, which had just the right level of sweetness and glutinous texture.

The food in Taiwan is famous and rightly so. It brings together the best of flavours from its colonisers. In this great back street restaurant in Ximen (where the dishes are washed outside), I had the most amazing hot ‘silk’ cucumbers in clam sauce. Really delicious.

What is more, if you choose to eat Chinese style food you can pretty much pay as little as you want. This meal of vegetable and won ton soup with cold cucumbers in garlic and chilli cost about £1.60.

An amazing source of inexpensive foods are the night markets which are scattered across the city. These come alive just as the sun is setting shortly after 6 pm and are busy until nearly midnight. Although small, some of the stalls are nationally famous, like this one where you select the food you want to eat, put it in a colander, give it to the chef, who boils it in their renown soy soup, and gives it back to you to eat.

This guy is making noodles, scraping thin slices into his pot from a giant lump of dough.

I have not yet tried the ‘pigs blood on a stick’ which is being sold from this bamboo steamer but apparently it is delicious. They certainly weren’t short of customers.

Many of the stalls looked like little theatres, and I enjoyed just looking at the actors as they played their part in the night life of the city.

And if none of that takes your fancy, then there is always Dr. Pasta.