After a quiet Christmas a group of us set off for a four-day holiday to the ‘countryside’.

200km north east of São Paulo is the pousada (or ‘inn’) Trilha das 7 Cachoeiras (Trek of the 7 Waterfalls). This was our destination.

Leaving São Paulo and the holiday gridlock was painful but we were soon on the open road, past countless sprawling favelas and into the Atlantic forest. En route we stopped for a juice at the seriously quaint town of São Luiz do Paraitinga.

Here even the rubbish looks cute, like slightly over-sized festive decorations hanging off the railings.

The town felt like it was on a kind of permanent holiday, with live musicians in many of the bars and cafés, spilling onto the street.

Not long after this the concreted road gave way to a muddy track and the car slowly bumped its way around the mountains.

Much of the Atlantic woodland has been deforested; first for coffee plantations and then for cattle, but apparently this aggressive farming is on the decline and there is a genuine push to reforest and bring income through ‘eco-tourism’.

The biodiversity of the forest is extraordinary, with some claiming that it has a higher (if less flamboyant) variety of plant and animal life than the Amazon. Giant walls of trees make mountains around you and not a patch of land is barren. Everything is a shade of green.

At the end of the mud track was Trilha das 7 Cachoeiras, an incredibly idyllic series of simple and sensitively made buildings set in a massive landscape of forest and connected by the 7 waterfalls that give its name. It really is a special place. Arriving there after just 3 hours from the crazy megalopolis of São Paulo felt like stepping into some kind of paradise.

A husband and wife who live between this place and São Paulo own the pousada and surrounding land. They are on an ambitious plan to, quote, “save the planet” and are planting thousands of trees on their estate. Well, you have to start somewhere.

Our first full day was spent doing practically nothing. (This is not something that I am usually very good at.) Lounging around in hammocks, exploring the ‘territory’. That kind of thing.

One of the 7 waterfalls close to the main house is a kind of natural ‘hydro-massage’. We clambered down the mud and rock and dropped into the refreshingly cold and fast-moving water. Easing our way up stream with the help of a guide rope, one at a time, we pushed ourselves under the torrent.

The pressure of the water is extraordinary. Even from this relatively short drop the impact is fierce. It gives you a glimpse of the power and strength of water. Pummelled, you grip the rope and hold your breath. It’s like a thousand tiny hands punching you over and over.

The second day was the organised ‘trek’ through the forest. A thousand pairs of feet must have hiked the trail before, but because there was no formal path, it really felt like an adventure into the unknown depths. Scrambling over rocks or under vegetation, wading across streams and avoiding plants or poisonous insects, it was all somehow marvellously reminiscent of the childhood dreams I used to have of traveling across the jungle.

At many of the 7 waterfalls we stripped down to our trunks and splashed around or made for the cascades themselves, offering our bodies once more to a battering from the torrents.

4 hours into our 7 hour hike it began to rain (and rain and rain). A kind of fleshy, hot, wet rain. I know it probably sounds odd but the rain here somehow seems wetter than in Europe. Each drop is a kind of heavy, plump peach of a raindrop.

Needless to say we were soaked. Trouble in paradise: my sneakers now stink of pondweed. They just refuse to dry out completely.

The third day we walked a leisurely 40 minutes away from paradise to the little village of Catuçaba. Here even the taxis are super-cute:

VW Beetle. The standard cheap car in Brazil is still the best looking.

The afternoon was spent again in the falls. In the evening there was a beautiful firefly display. I had wanted to see this for a long time and no idea that it would happen, so for me it was a big thrill.

The fourth day and it was already time to go. Non-stop rain made it easier to leave paradise behind. Well, actually, it made it a lot, lot more difficult. The mud track was like a swamp and even once we made it onto tarmac the frequent ‘mountain in road’ where the rains had caused pinnacles to topple and slide, made the journey hazardous at times. We owe our safe passage to the driving skills of the newly titled ‘super-Breno’.

The quest for banana things that nevertheless aren’t quite bananas continues. Paradise provided a plate of possibilities at breakfast during which the ‘banana lady’ came and served us a variety of banana-based dishes.

Baked banana with cinnamon in which you scoop out the warm soft banana from the skin with your spoon; banana virado, which is a kind of compote with cheese, and; banana pancakes – easily my favourite and which commanded a forceful: “Sim, por favor! Obrigado”, each time the banana lady passed by with her copper pan.

All of these were delicious in different (albeit banana-related) ways but none has quite surpassed the pure banana pleasure of the Bananinha eulogized last week.

At completely the other end of the banana-pleasure-scale come the children’s ‘treat’ discovered in a café in Catuçaba and simply titled: ‘Banana’.

Although the graphic is excellent (and promises a banana delight) the thing itself was foul. Like a dump of extra sweet refined sugar held together with Evo-Stick in a supposedly edible cardboard cup and tasting not one gobbet of banana. Oh well. You can’t have it all.

My rubbish research has led me to become a collector of Brazilian waste bins. The particular bins I mean are the strange ‘baskets on legs’ that appear in various forms.

At first I thought that these were a municipal initiative but their sporadic appearance (they are much more common in richer areas) and the vast differential in size, shape and style, made it clear that this could not be the case. Apparently, the city officials turn a blind eye but do not sanction them at all. As a citizen, you are responsible for the pavement directly outside your house, which, as I am sure you can imagine, means that some areas are paved with ornate marble mosaic and others are completely unmade. These ‘baskets on legs’ are therefore erected by the owners of the houses directly adjacent and are constructed in order to prevent stray dogs ripping open the bags.

Here are a few from my collection thus far:

This one looks like some kind of sculpture. You might just see that it has a catch for a padlock. Some people lock their rubbish away and give the collectors a key to avoid ‘rubbish theft’.

This one is kept behind bars.

This is an interesting one because it is made out of rubbish. I like that. A waste bin made of waste. 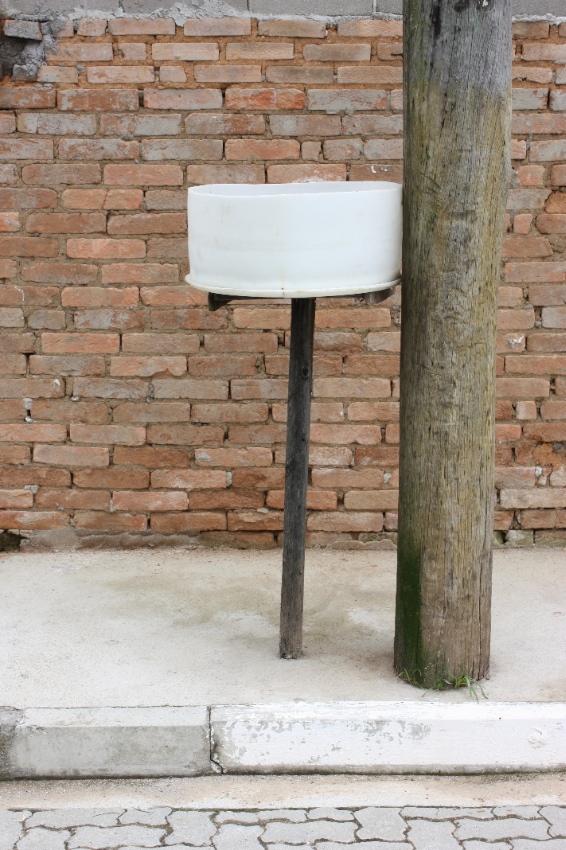 I’ve been trying to think of what I can actually ‘make’ in the limited time that I have in Brazil, without any formal institutional space and modest support. I think I’ve come to a decision. I plan to make a number of proposals for projects, pieces or ideas. I am thinking that there should be quite a large number of proposals – between 30 and 50 – I’m not sure yet. Some of these will be ‘almost impossible’ and will have to exist at the level of a proposal alone; others will be so slight that they are barely worth proposing.I will then make a kind of performance lecture in which I will present the proposals to those people that I have met here in São Paulo: curators, programmers and people working in the rubbish and recycling industries. The idea of Artist Links is to make connections for potential working relationships, so I would like to use these proposals to try and create collaborations for projects in the future.

It is the last day of 2009. Somehow being in this hot, sprawling, foreign place all sense of occasion and time has evaporated. As everything is new and somehow ‘special’ to me, it seems excessive to think about the celebrations as well. But Brazilians like a party, so we’ll see what happens tonight. Happy New Year.