My personal opinion is that all people can be divided into two categories, those who collect, and those who do not. As a collector myself I am interested in people who collect. Frederick John Horniman (1835-1906) was a collector in the Victorian tradition and on an epic scale. It is of course his collection that forms the bedrock of the Horniman Museum.

In what used to be the main reception of the museum, but is now the staff and goods entrance, perched on a pedestal, is a bronze bust of Horniman. 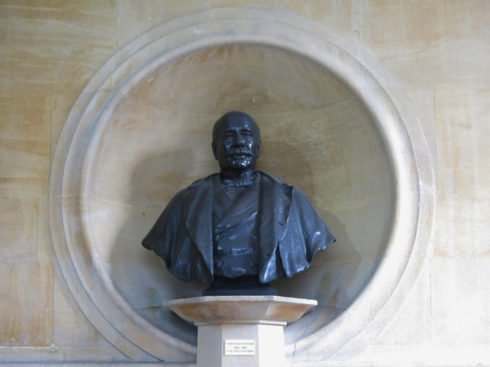 Nobody seems to know much about it. My hunch is that it was created at the same time as the building, which opened to the public in 1901. It fits too perfectly into its nook to be a later addition. One option is that it is the work of sculptor Frederick William Pomeroy (1856-1924). Pomeroy made a bronze bust of Horniman’s daughter-in-law in 1898, and also a memorial tablet for the museum. I’m still in pursuit of some solid evidence that confirms or contradicts this theory. (If you know something, get in touch!) 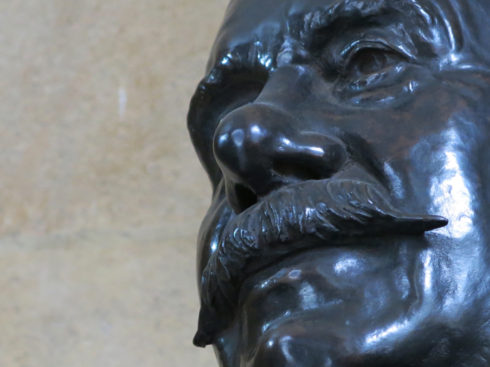 As part of my residency, and in tribute to the man that endowed this fantastic museum, I want to create a Horniman false nose. And what could be a more fitting material for a tribute, than gold? After discussing my plans with the conservation team, writing method statements, and making patch tests, I was given the go ahead to make a cast of the nose and moustache area of the bronze bust.

Ready for your trim sir? 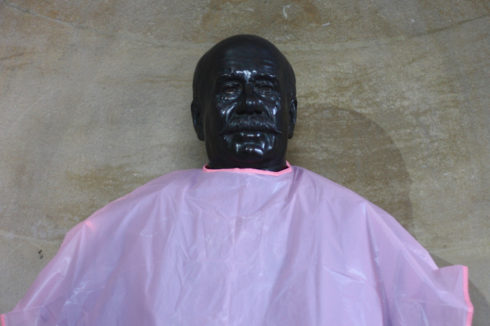 Despite having used the alginate and plaster bandage technique literally hundreds of times to successfully cast faces (most recently on the life mask of another Victorian and Edwardian collector, Henry Wellcome) the process failed. Perhaps I had been over cautious about what materials to use, not wanting to affect the patina of the bronze, but still, I thought it would work. The alginate can sometimes ‘go off’ but the batch seemed fine to me. Anyway, for whatever reason, possibly the cold temperature of the bronze, it wouldn’t release without tearing. 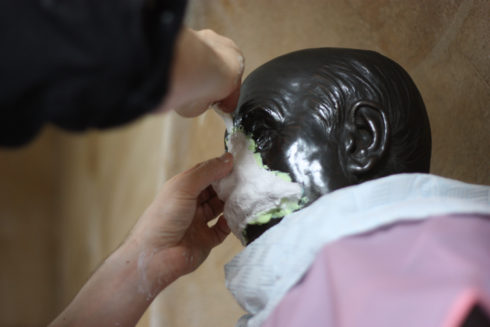 I don’t mind admitting that I was pretty embarrassed. After all the efforts to secure the permission and cordon off the area, I felt a bit incompetent. Luckily for me Lindsey Bruce, Exhibitions Officer, and my main point of contact at the museum, was unperturbed. “We will make it happen,” was her refrain.

It was back to the 4D model shop in Whitechapel to see what other casting agents I could safely use. Armed with a pack of Gedeo Siligum, a silicone based moulding paste, I returned to the museum to run a test on a bronze scrap. It seemed fine, and Julia Gresson from the conservation team, gave me the go ahead for a second attempt.

Poor Frederick looks a bit miserable having his nose cast. 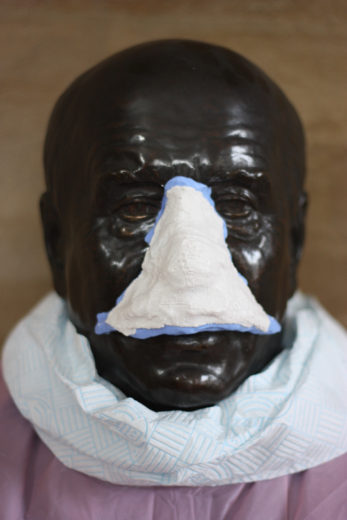 This time, success! A very good cast that also picked up some dirt, which must have gathered up his nose over the years. Once the cast was off, Julia gave him a good clean. 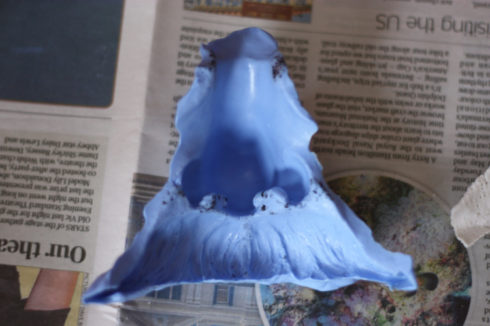 Taking the mould back to my studio, the next step is to make a wax template. Yes, I know this looks like a school project gone wrong, and yes, that yellow stuff really is Play-Doh. Play-Doh is a great way to build up the sides of a wax mould. It’s cheap, washes off easily, and can form a tight seal. 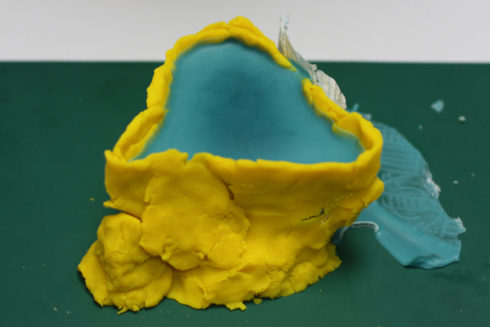 After a couple of hours leaving the wax to cool and harden, I stripped back the Play-Doh, and removed the mould. The Horniman nose and moustache wax template stands proudly before me. 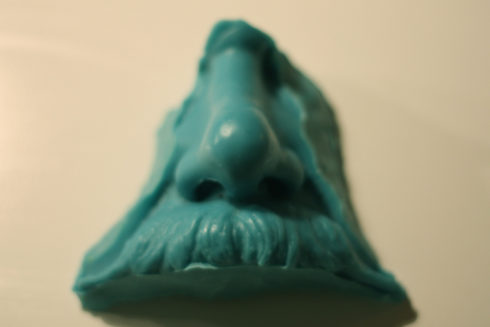 Now that I had at least one good wax copy, I made a plastic polymer version from the same mould as an insurance. 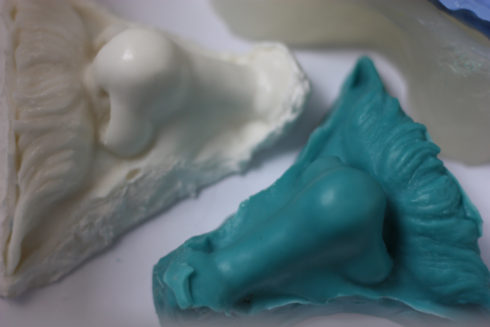 The next step was to take the template to a metal workshop to have it copper electroformed. Electroforming is a process that builds up a metal surface through electrodeposition. Because wax is not conductive, the area to be electroformed has to be treated chemically with a conductive layer, something like a metal paint. The technical term for the template is ‘mandrel’. The mandrel is then put into this crazy electrolytic bath with a copper solution in it. The copper crystals then slowly form around the conductive pattern. 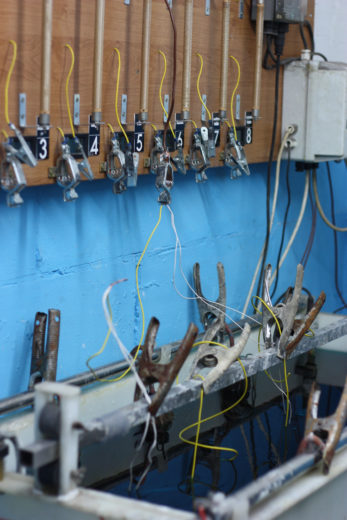 A couple of days later I returned to the metal workshop to collect the mandrel. The wax is now covered with a beautiful layer of copper. 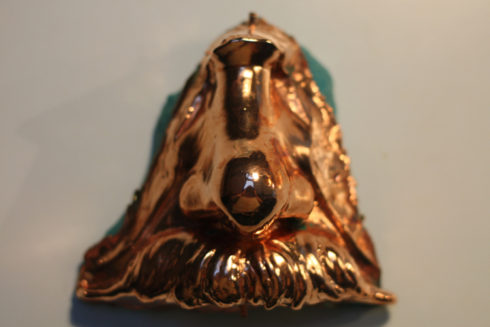 To get rid of the wax, I simply popped the thing into the oven (130 degrees Celsius for 40 minutes) and let the wax melt out through a wire grid into an aluminium take-away carton. 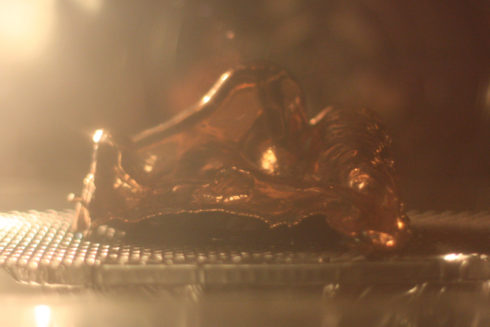 Back in the studio, I cut out the shape I wanted, following the natural line of the moustache, punched out the nostrils, and drilled some holes for the thread ties. 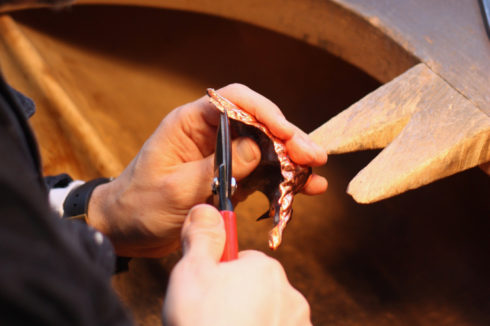 This is the final shape. 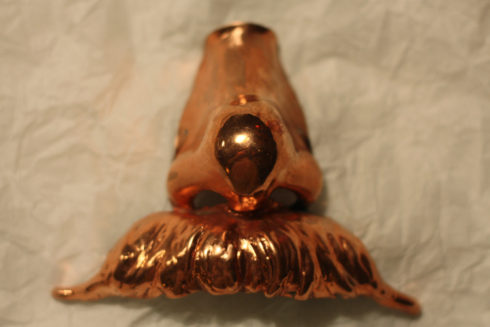 Then it’s back to the metal workshop for the golden jacket. The copper nose-moustache-combo has to be polished and thoroughly cleaned. The first bath is just washing-up liquid and water; the second running water; the third acid, in which you can see the dirt fizz away! 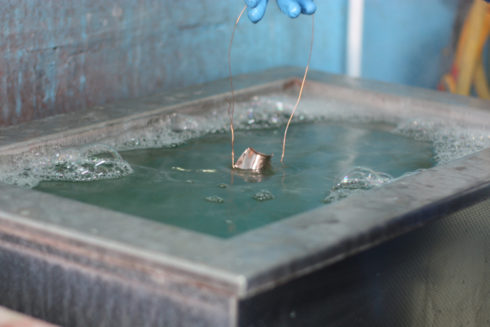 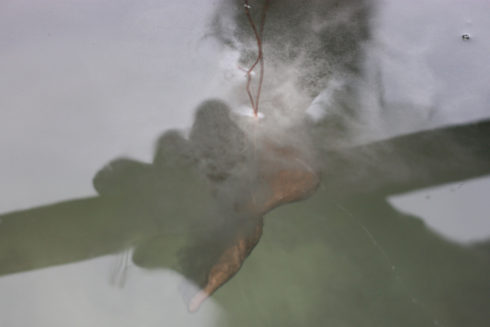 Then Mr Horniman’s nose is plunged into a bath of gold. In fact, it is just gold dust in a solution, and the process of gold plating is similar to that of electroforming, only much quicker. I tried to distract the technician, asking questions for as long as possible, so that an extra thick layer of gold would make its way onto the surface (only joking). In reality, it’s only a few microns deep. If you rough handle gold plate, you will see what’s underneath. 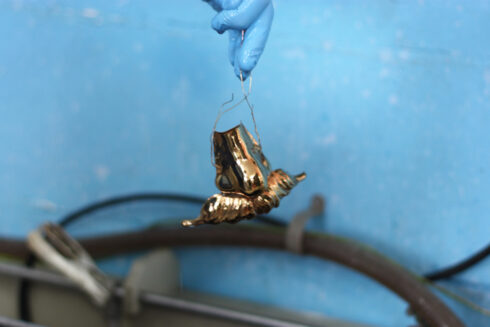 And there we have it. One gold Horniman nose and moustache. 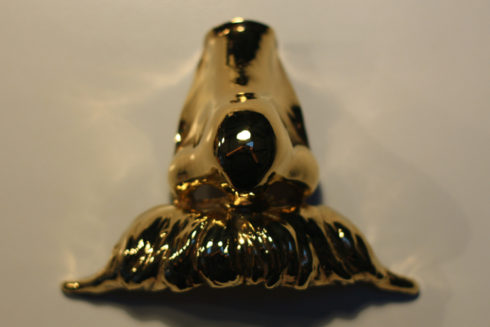 However, I’m not sure it’s quite finished yet, and I want to give this nose some kind of totem, that makes it more of an object worthy of the taxonomic principles that not only form Horniman’s collection but also which that collection helped to create.

There are several species to which Horniman lent his name. This happened when entomologists were invited to survey Horniman’s collections. Although Horniman did go on big world travels later in his life and brought crate loads of stuff back to the UK, most of his early collections were purchased through intermediaries. Someone goes off to Africa and collects a bunch of specimens, brings them back to London, and Horniman buys them at auction, for example. He would then welcome experts to look at what he had amassed. Specimens include a moth, Eusemia hornimani, (now Heraclia hornimani), a true bug, Tesserotoma hornimani, and the ‘Horniman beetle’, Ceratorhina hornimani (now Cyprolais hornimani), from Cameroon, described by naturalist and explorer Henry Walter Bates in 1877. 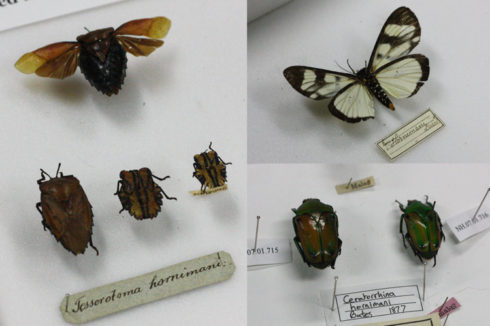 Perhaps the most beautiful species named after Horniman is the ‘Horniman Swallowtail’, Papilio hornimani, known only from the northern forests of Tanzania and the southern hills of Kenya. As Jo Hatton, Keeper of Natural explained to me, it was identified by Victorian entomologist W L Distant in 1879, when he was looking through Horniman’s vast collection of butterflies.

This is the original specimen that Distant ‘discovered’. 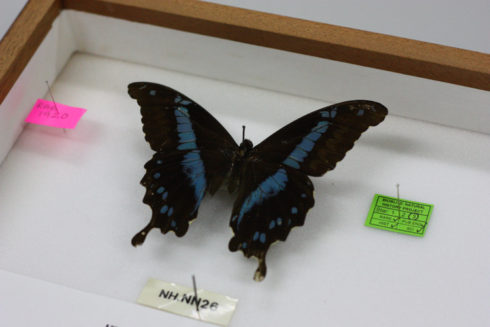 As an aside, if you’ve ever wondered how all those Victorian insects were pinned at just the right height, Jo showed me the entomologist’s ‘Pinning Stage’, a metal block that is used to set the specimens and their labels at a consistent height on the mounting pin. You pin the specimen, pick which height you want, and push the pin into the stage. By using the same hole each time, the specimens will always be at the same height. 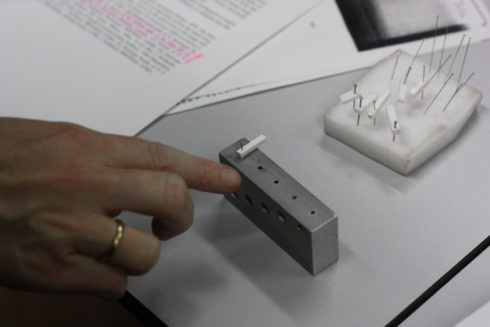 Here is the defining Papilio hornimani on its original pin, with two labels beneath the butterfly. 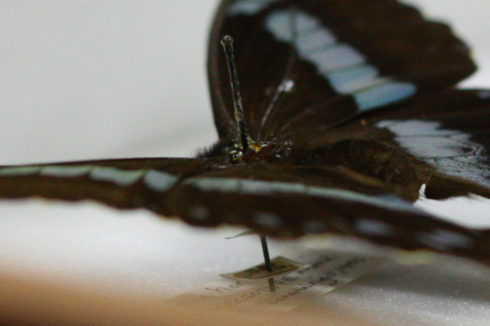 Although almost always it is the open wings of the butterfly that we see pinned up, because they are traditionally seen as the most pretty, the reverse side, which is, I suppose, more commonly seen in nature as the butterfly sits on vegetation, have their own muted beauty. The Papilio hornimani is made up of soft dusty browns, greys and creams. 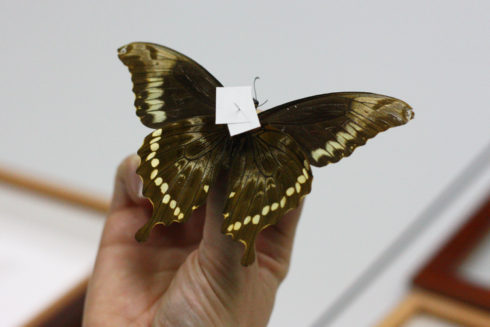 As you might expect, over the years, the Horniman Museum has acquired many examples of its lepidopterous namesake. 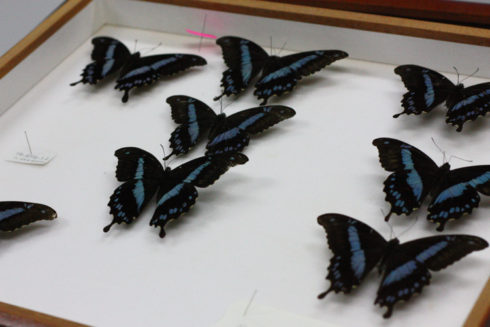 Where does all this fit into Horniman’s gold nose? Well, I’m thinking of giving him a Swallowtail nose ring, in the spirit of anthropology. I have drawn out the shape and will soon laser cut a piece of 0.5mm steel, which I will then have plated in gold, to match the nose. 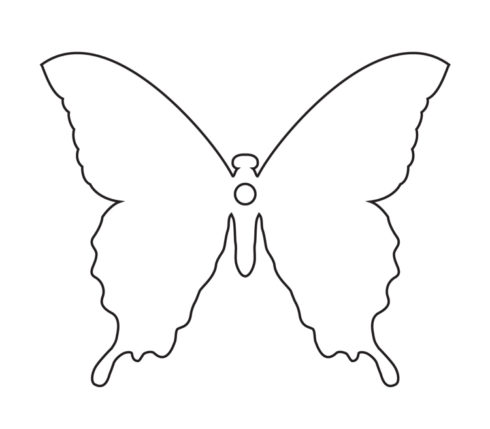 Horniman fell in love with Japan (as in fact, have I) and so I have ordered a length of ‘kiki himo’ (literally ‘gathered threads’), 100% silk braid made by craftsmen in Uji, Kyoto, which is being sent over from Japan, as the string to tie on the nose. Soon I will be able to reveal Nares hornimani. Watch this space.