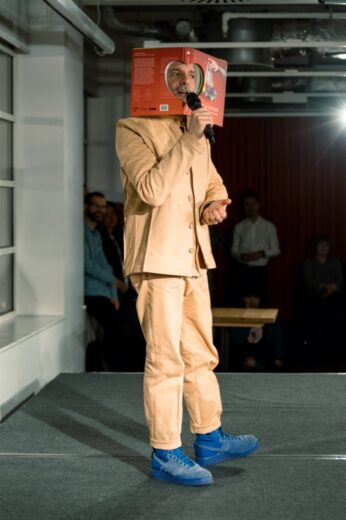 A quarter of a century ago (in 1995) I walked into this very room to witness something that wasn’t quite a club, couldn’t really be understood as painting, did not conform to the genre of performance in the sense that I had understood it up until that point, and nevertheless was all of those things.

The year after that, in 1997, Princess Diana died, and I graduated from Central Saint Martins College of Art & Design, with an MA in Fine Art. My graduation piece was Joshua Sofaer, a biography by Margaret Turner. I hired the actress Angela Vale (my friend’s mum) to play Margaret, and launched the volume at Books etc which was across the street at number 120, now TK Maxx. It was the week’s number 1 best seller. Number 2 was, Diana: A tribute in pictures.

Despite the endorsements on the cover, that book was (of course) full of empty pages. And then in the Window Gallery, what is now the Foyles entrance, I mounted an absurdly large display of books, a tower of Babel, my hubris reaching for the sky. 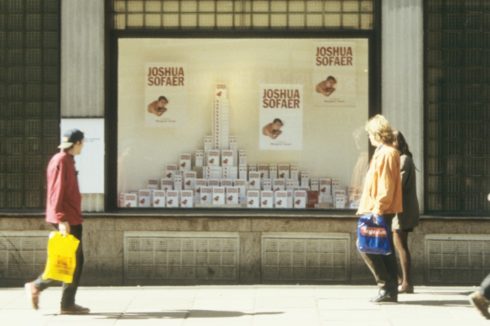 Here I am, 22 years, 5 months, and 15 days later, with another book, not by Margaret Turner this time but edited by the magnificent Roberta Mock and Mary Paterson with an exciting plethora of contributors, and this time, there are words and pictures in it.

I’ve thought a lot about death during the creation of this book, about wanting it to be done, somehow in order to die. For the avoidance of doubt: I don’t want to die (at least not now, not yet) but there is a sense in which it’s trace of me already lasts beyond me. The book seems to want to close a chapter on the life of those it describes. It says that it is ok to full stop. It confirms my mortality.

Part of my (obligation-free and leisurely) involvement in this book has been as a kind of informal picture censor. What is in? What is left out? And this question of suitability and appropriateness has always been one that I have found very hard to answer.

I was concerned that the book shouldn’t be too tasteful.

But it’s out now. The possibility for adjustments has passed and I am experiencing the pleasure and fulfilment of emptiness.

Talking of which: In the mid-2000s colonic irrigation was becoming popular. The idea of an internal cleanse was something I responded to and so I went to the Hale Clinic (opened by Prince Charles, who, let’s face it, has been right about a whole lot of things – I’m not defending monarchy). The Hale Clinic choose to call their process ‘colonic hydrotherapy’. I suppose they consider the word ‘irrigation’ farming terminology.

The practitioner was a neat woman in her 60s who, by her own account, had stayed on past retirement because of her passion and belief in the colonic process. I took off my clothes, put on a medical gown, lay on the padded table with my knees bent, as she inserted two hoses into my rectum. One introduced a gentle stream of warm water into the bowel, the other carried that water away, after it had made a trip through some of the 25 feet of my intestines. As she was gently massaging my abdomen to loosen the hardened deposits of faecal matter gathered in the nooks and crannies over the years, her wrist would brush against the tip of my penis which was lying against my belly. What with the jet of water stimulating my prostate on one side and this dick rub on the other, I was horrified by the idea that I might get an erection. “Relax,” she told me, “let it all empty”.

The word ‘empty’ comes from the Old English ǣmtiġ, which literally meant “without obligation, leisurely”, and it is this obligation-free, leisurely emptiness – a meaningful emptiness – that I would like to embrace. Like Pinocchio, the wooden puppet, whose nose grew when he lied, but whose patience and good behaviour were finally rewarded by becoming a ‘real’ boy, the contributors to this book have filled the empty pages of Joshua Sofaer, a biography by Margaret Turner, and created Joshua Sofaer: Performance | Objects | Participation. 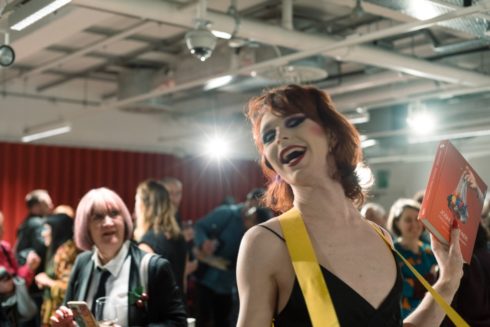 A version of this text was performed at Go By The Book, the launch of Joshua Sofaer: Performance | Objects | Participation at Foyles Bookshop, Charing Cross Road, London, 25th February, 2020.