In autumn 2019 I shadowed officers who work for the ‘Regulated Industry’ team at the Environment Agency, based in Nottingham. The experience was part of the background research that went into ‘Regulated Exhibition’ which opened at Backlit Gallery earlier this month. This is the second of two posts to coincide with the exhibition, in which I journal something of the experience.

On my second day shadowing officers who work for the ‘Regulated Industry’ team at the Environment Agency, based in Nottingham, I spent the day with Keasar “Kes”, Regulated Industry Officer. Officers rotate responsibilities and right now Kes is doing a 6 month stint on the ‘illegals’ and we were off to visit some reported illegal waste sites. 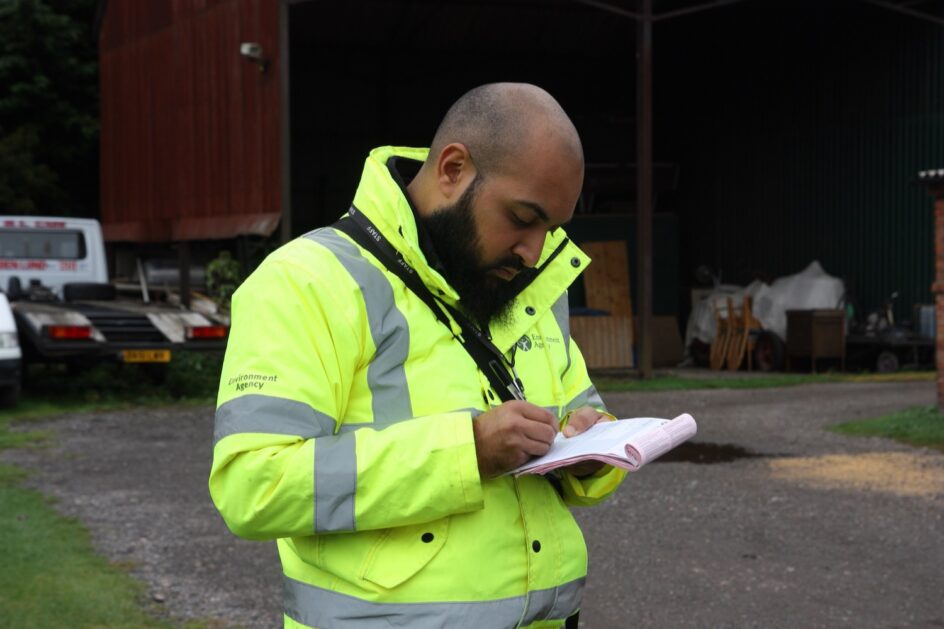 The Environment Agency in Nottingham receives reports of alleged illegal activity that could be harmful to the environment through its hotline. In the two weeks prior to my visit, they had received 27 such reports. We were off to try and find 4 of them. Part of the problem is tracking down the sites. People who make the reports often supply scant information as to which particular field a pile of tyres were burnt in (or whatever) and there is the added problem that some of the reports are malicious, insomuch as people use the EA as a way of niggling a neighbour with whom they are in dispute. Undeterred we made our way to Kes’ car and off into rural East Midlands.

I can’t imagine it would be easy to find a happier employee than Kes. He finds the EA a fantastic and supportive place to work. Expecting the arrival of his third child, Kes has already been in discussion with his managers about how he can strike a good work/life balance and reduce workloads where necessary. “They value us and we value them”, Kes says. The EA’s support of staff bringing their full selves to work has even had the effect of reconnecting and deepening Kes’ relationship to his heritage and his faith.

Faith might not be enough on a hostile site, and Kes assures me that he has martial arts training and breakaway techniques, although he hasn’t had to use them yet. It’s the softer skills, negotiation, persuasion, listening, that come in most useful. I ask if these skills were tested when he applied for the job, and Kes regales me with an account of the role-playing exercise he undertook in his interview, with one of the interviewees playing an irate farmer. Diffusing tension is a priority, and as Kes tells me, “Enforcement is the last option. It’s much better people work with us.”

The first site we visit is that of a reported illegal breakers yard. Having seen the level of waste management necessary at a permitted business for the safe dismantling of cars on my first visit with the EA, I can see why this needs to be regulated. If inadequately managed, battery acid, break-fluid, oils, diesel, and petroleum, can pollute the soil and the watercourse.

At the end of a long single-lane track into farmland, Kes sends a SMS to a lone worker support system with his location. If he doesn’t log back in with them in an hour, they will call him and if he doesn’t answer they will send someone else to check he is alright.

I’m beginning to feel a kind of TV detective drama excitement (and wondering where the soundtrack is) but there is nobody about. Rather we come across a very well-appointed rural cottage, and some neat outhouses. Around the corner however, we find a lot of cars. “Oh,” I say to Kes, “these can’t possibly be for personal use.” “Well, actually they could be,” Kes responds, “…and even if they aren’t there’s nothing especially wrong with parking vehicles here. We are looking for evidence of breaking.” And then we begin to see it, neatly stacked piles of car engines and tires, piles of bumpers, removed windscreens. This is the ‘bingo’ Kes needs. He completes a ‘Police and Criminal Evidence Act 1984 Code B’ form, and posts it through the door of the well-appointed cottage. 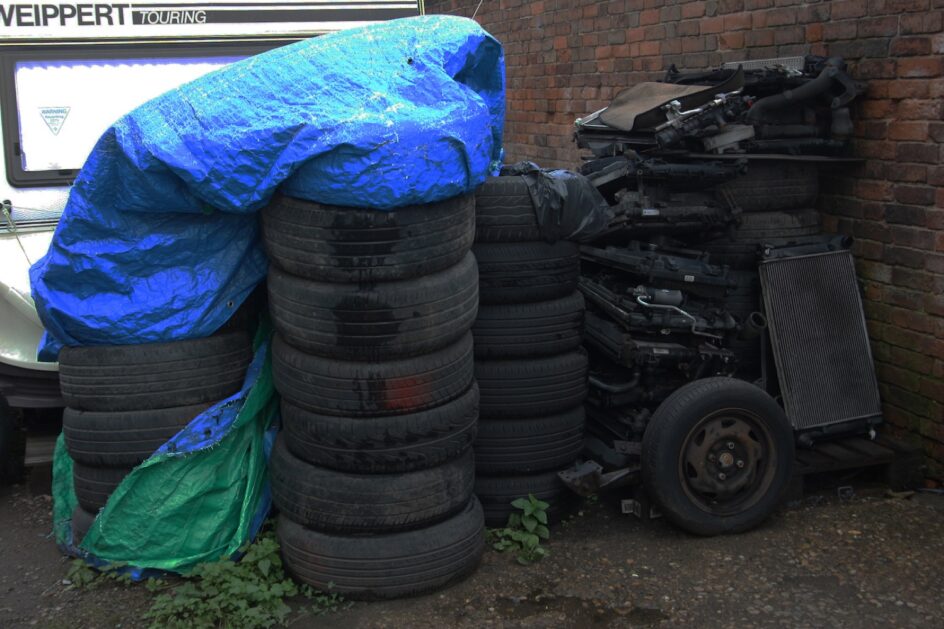 From breaking to burning; we went to respond to the report of illegal burning in a field. We got to the spot indicated in the instructions and were faced with, well, green fields pretty much as far as we could see. “How are we going to find a fire long after the smoke has disappeared?” I asked Kes. “We are looking for signs of burning. Bits of scorched tyre, ash on the ground, that kind of thing.” After traipsing along a few fields, asking a farmer who was ploughing one of the fields in his tractor, and generally looking at anything that looked like a pile of waste material, we gave up. Needle. Haystack. 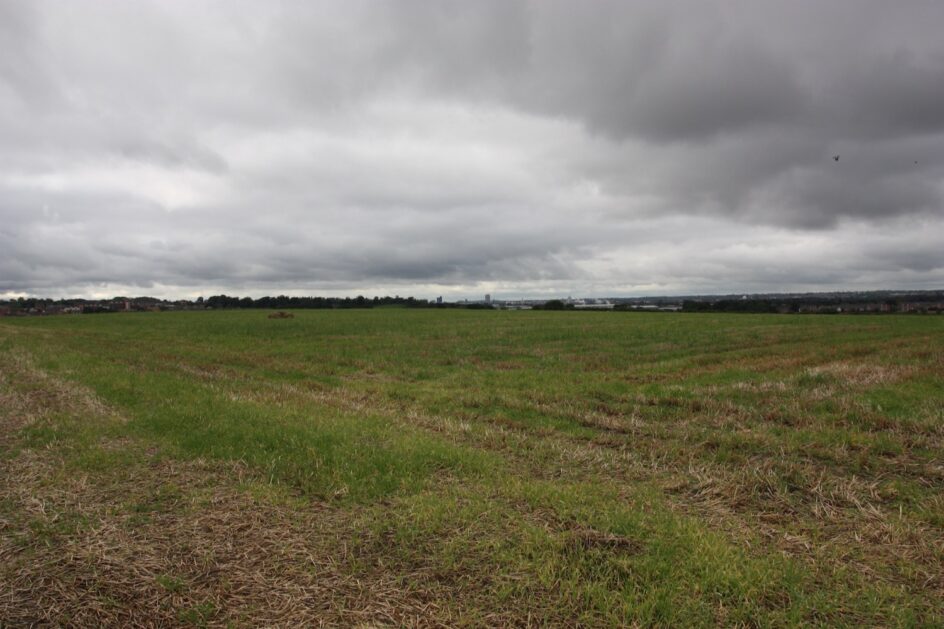 Next stop is a reported fly tip blocking a rural pathway in Blaby, south west of Leicester. Yes, someone blabbed about Blaby. Fly tips are generally given to local councils to deal with, but in this case the report was for a huge amount of waste, over 15 tonnes, which means it becomes the responsibility of the Environment Agency. Kes has his doubts. People will often inflate the size, weight, smell, or sound of a problem because they think it will encourage the EA to come out, but in fact all this does is to delay a response from the correct organisation. Although we found some remnant pieces, which indicate a fly tipping site, there were no great piles of trash. It’s very possible that the tip had been reported to the council as well, and that they had stepped in to clear it. Signs indicating fly tippers would be prosecuted looked new enough to have been recently installed. 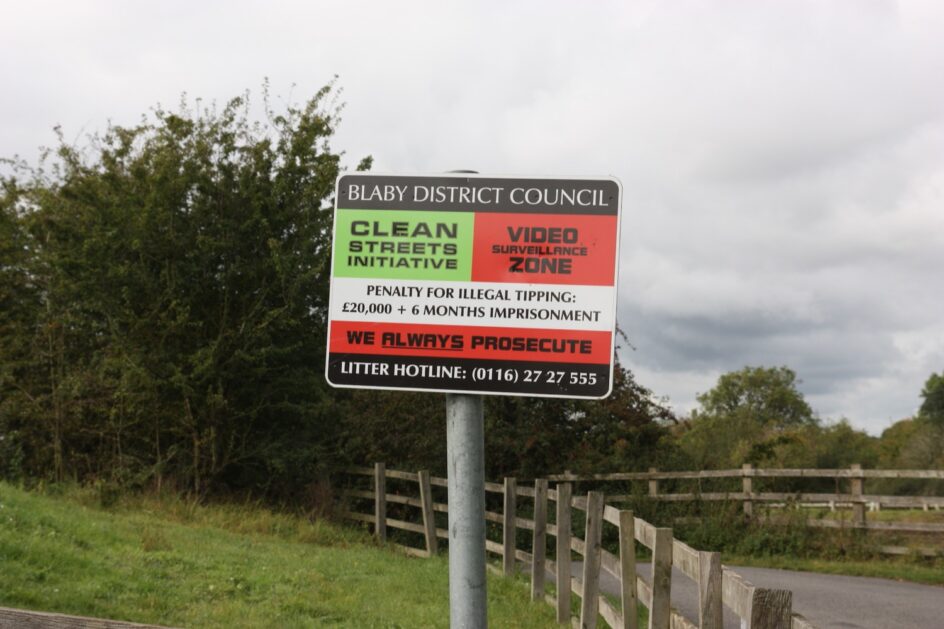 Stopping for lunch at a local Subway (“They are the ones with toilets!” Kes remarks) there is a ring on Kes’ phone from the owner of the well-appointed cottage next to the suspected illegal breakers yard. She’s in some distress. Kes quickly puts her at ease and she explains that the cars belong to her dad and she doesn’t really know what he does with them. I’m struck by the fact that generally people want to do the right thing. Kes tells her that he will need to be in contact with her dad.

After lunch we went in search of illegal burying of asbestos. The report was a bit vague and we spent some considerable time in fields dodging cow pats, unclear exactly what we were looking for. After asking a local for some help, we found the spot. It was rather less concealed than we at first imagined: a pile of waste, overgrown with weeds and grass, at the back of a new build. Finally there was some action (although not quite requiring Kes’ martial arts or breakaway techniques) as a very irate farmer, complete with requisite flat cap shouted at us: “GET OFF MY LAND!” It was, in a way, the script that I had slightly malevolently been hoping for, and everyone played their part to perfection. Although he didn’t have to comply, Kes decided the best course of action was to move back onto the pavement and to explain the purpose of his visit. As the farmer’s shallow breathing began to lengthen, and the redness in his face to fade, Kes’ soft skills came into their own. The farmer then led us back onto his land, facing us out in the direction of an empty field, with the pile of waste behind us. “As you can see,” he said, “there’s nothing here.”

Kes gently steered us round to face the pile of waste. “And what about this?” he asks in a mild-mannered voice. It wasn’t Kes’ job to come to an absolute conclusion but rather to report his findings. It was unlikely that the farmer was about to admit dumping asbestos, and unlikely to me at least, that he would actually dump it just a few metres away from his niece’s new home. But something wasn’t quite right. As Kes explained to me, of the many bad ends for a piece of asbestos, it is by no means the worst for it to be buried; asbestos is only a danger when airborne and ultimately inhaled. But burying it illegally risks it being dug up unknowingly, which is why it is a problem.

Driving back to the EA offices we chat about the hostile situations officers can face, and some more about the tactics used to diffuse them. Kes comments that as a British Pakistani he feels he has to be extra polite and extra responsive in potentially difficult situations. “Is that because you are conscious of being a brown person when you confront irate farmers?” I ask. “Yes,” Kes responds, “absolutely.”