This week saw us move from a city renowned for its ugliness to one renowned for its beauty. Taking advice to travel overnight, we booked the 2 a.m. ‘executive’ bus from São Paulo to Rio de Janeiro (with free crackers in a bus shaped cardboard packet and fully reclinable chairs), arriving intact but exhausted at 9.30 a.m., grateful nevertheless for the extra one and a half hour ‘delay’ which meant we could fretfully doze a bit more.

Before we left São Paulo we paid a visit to the Aquarium. Lots of lovely fishies, as you might expect from an Aquarium.

And then without any explanation suddenly there was a series of tableaux chronicling the evolution of man from ape to human.

Truly unexpected, extraordinary and wonderfully odd, if in a crappy sort of way. I was transfixed.

And at the mention of apes…

We also went to the zoo (nice but sad). São Paulo has the fourth largest in the world and sets about studying and protecting endangered species.

It was here I saw my first ever banana tree (albeit caged with a bird of prey). Look at the strange dangly flower bit at the bottom.

And so to Rio.

The beauty of the city is immediate, epic and lasting. It is like everything anyone has ever told you about it. For the body and the brain:

Golden beaches that are ridiculously busy in this hot holiday season but nonetheless a full on beach experience, in this case Ipanema.

Real Gabinete Português de Leitura, possibly the most beautiful public library in the world, with what has to be one of the biggest library desks.

The floating palace of Ilha Fiscal, playground in the days of Imperial rule.

The faded grandeur of Largo do Boticário.

The ever-present Cristo Redentor, perhaps the cleverest piece of public planning on the planet.

The exceptionally beautiful sunset across Rio, photographed from the spectacular Pão de Açúcar, or Sugarloaf Mountain.

Stepping off the cable car which took us back down into the city, a stall holder was selling t-shirts that spelled it out: I [heart] Rio.

Whereas in São Paulo it is difficult to find a postcard, Rio is ready for tourists. A bit too ready. Our ho-cell, sorry, I mean erm, ‘hotel’ room is very basic. A bed. A toilet. A shower. Not even a window. Well, there is a hole in the wall that overlooks a communal staircase out of which I lean to try and get a better internet signal borrowed from goodness knows who to skype-call Lloyds Bank for the umpteenth time to ask why my cash card won’t work. (“As far as we can see sir, you haven’t made any attempt to use your card.”) All the rates are double price during Carnaval. Literally 200% today of what they were yesterday.

How do you explain what Rio Carnaval is? It’s not just the scantily clad bronzed ‘girls’ wiggling their way down a massive catwalk with sequins and feathers enough so as to make the Baroque look modest; Carnaval takes over the whole of the city, indeed the whole of Brazil, because Carnaval is a festival which follows swiftly on from Christmas and New Year and marks the height of Brazilian summer.

When I asked people in São Paulo what they were doing for Carnaval, almost always I got the reply “Nothing”. As I guess you might imagine, there are two camps: the party camp and the ennui camp. Rio is definitely in the party camp.

Although I spurn ‘compulsory fun’, we did want at least a taste of the whole sequinned shindig and so, many weeks ago, we set about booking tickets for the Sambódromo, the specially built stadium through which the bands (and scantily clad ‘girls’) parade.

The parades through the Sambódromo go on for five days but the two main days are Sunday and Monday. Unless you want to pay the exorbitant prices through a North American ticket agent this is what you have to do. You get Débora to phone the ticket hotline on the one day (yes, really, it’s only one day) that it is active. She asks them for tickets for Sunday or Monday. They tell her they have already sold out. She phones me and asks if Saturday will do. I say yes. She phones them back and books the tickets. Then, get this, she has to go to the Carnaval’s bank and deposit the money into their account. The bank give her a receipt which she then has to fax (this is really all true) to the Carnaval with her postal address. The Carnaval then send a letter to her home address indicating the place and time in Rio where she has to go on a certain day to pick up the tickets. I kid you not. Kind-hearted Débora does all this for us. (It was exactly the same process when we booked our Hotel.) A few weeks later the letter from the Carnaval arrives to confirm our tickets for the Saturday. “What is it on the Saturday?” I ask. “It’s the Champions Parade,” Débora replies, “so you will get to see the spectacular winners.” I think about this for a moment, “But how can the Champions parade before they have won?” It turns out that this Champions Parade happens the following Saturday, when we will have already left Rio de Janeiro and will be zipping up our suitcases and on the way to the airport for London.

We take some relief from the fact that neither Débora (who is from Rio) nor anyone else we have thus far met, has ever actually sat in the Sambódromo. It holds 90,000 people but in a city of over 6 million, in a country of nearly 200 million, all of who are celebrating Carnaval, it is only one element of the ‘celebration’.

I am not going to attempt to do justice to the complex network of parties, balls and parades but try to imagine a festival with 6 million people all day and all night non-stop for 120 hours, all in novelty costumes and you will begin to get some idea of what is going on here right now. The four main elements you can immerse yourself into are (1) following the blocos, which are the local samba schools that don’t enter the official parades; (2) the evening processions along Avenida Rio Branco; (3) the top 14 samba schools who parade in the Sambódromo; (4) the Carnaval Balls.

(1) Blocos
These happen literally everywhere and anywhere at any time of day or night. I was stunned when Débora (who has come to Rio for Carnaval) called for us at 7.30 a.m. Sunday morning (directly off the overnight bus from São Paulo) to go downtown for a “fun bloco”. When we got there at 8.30 a.m. (yes, in the morning) I couldn’t believe my eyes. There were thousands of people all in fancy dress swilling beer and dancing to the rhythm of the drums.

And of course, here, as everywhere that people are drinking, the catadores are working. I saw one guy lazily chuck his empty can on to the street in front of him and within 15 seconds it was in a catador’s bag.

(2) Avenida Rio Branco
Apparently the street Carnaval in Rio is undergoing a renaissance after some years in the long shadow of the ‘main event’ in the Sambódromo. Here, practically anyone can parade and they take it just as seriously as those in the top 14 schools that make it into the commercially exploited ‘big one’.

Although the floats do not have the same high-end production values of Sambódromo, you can see how empowering it is for participants to parade.

And some of the costumes were just as full on.

(3) Sambódromo
Thousands of people, who don’t have tickets, swarm around the stadium. You can see all the giant ‘floats’ lined up on the street. They are monsters. Metaphorically and literally metaphorically if you get my drift, insomuch as many of them depict mythological or futuristic creatures.

One of my favourite things was to see were the impromptu changing rooms on the street; people getting into giant costumes of fruit cocktails, Roman legionaries, the slaves of Egypt or whatever. Every so often a taxi stops and a bronzed dancer in a sequinned thong gets out struggling with several bin bags full of feathered headdress.

Here in the middle of what is normally a main carriageway through the city, is a stable of costume horses ready to be saddled.

Particularly wide costumes are given space in requisitioned car parks.

And then they wait.

Before filing into the stadium in a giant parade.

Each school must parade for between 85 and 95 minutes and there are harsh penalties from the judges for taking too long. Although each school is headed by a group of ‘professional’ samba dancers in carefully choreographed movements, the throngs that follow (which can be up to 5,000 samba-hangers-on per school) are just people that have decided to join in. Anyone can buy a costume and join a school. It costs a fare bit but it is absolutely part of the tourist package on offer.

Although the ticket-ache meant that we didn’t get into the Sambódromo itself, I have to say, I am a bit relieved. Each show is 10 hours long: from 7 in the evening until 5 the next morning. Unless you’re in the ‘luxury boxes’ you have to make do with concrete or a plastic chair. And, well, it’s all pretty much, well, erm, the same kind of thing.

In the Museu Internacional de Arte Naïf, which we visited a few days ago, I enjoyed these paintings of the Carnaval, especially the third reproduced here, which seems to say something about the attitude of spectators as well as participants. 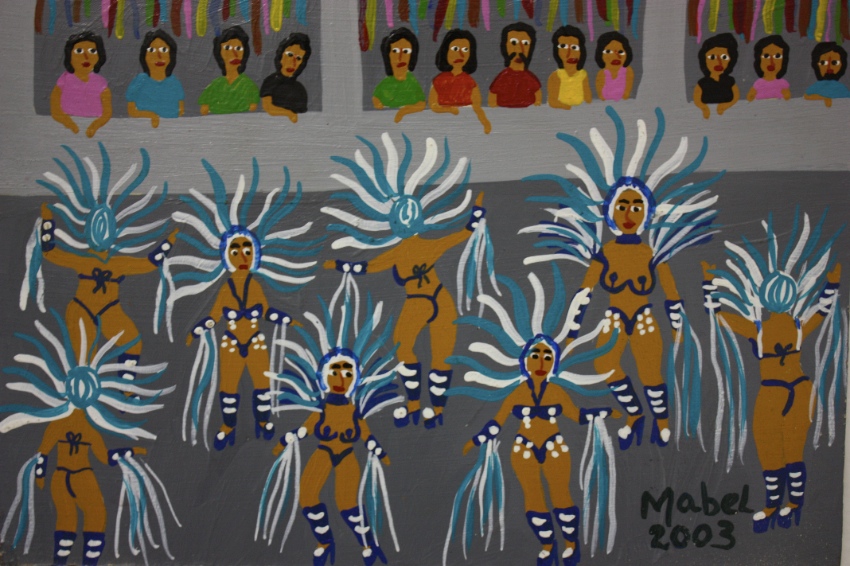 Of course the whole thing is broadcast non-stop on television here, with repeats throughout the day, which are difficult to avoid. Depending on which channel you are tuned into, you get a completely different ‘angle’ on events. One station insisted on shoving its ass-cam right between the dancers’ cheeks and then repeating the shot in slow motion; no doubt to show the skill of her samba moves.

(4) Carnaval Balls
I have yet to go to a Carnaval Ball. In my current state of sequin exhaustion I’m not sure I will make it.