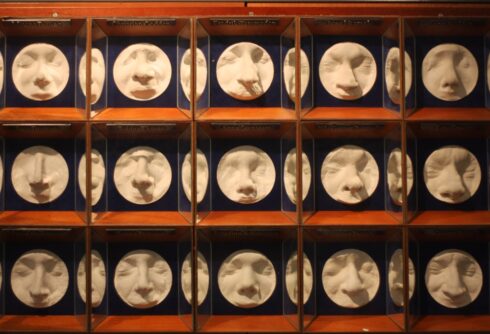 A commuter’s ride away from Copenhagen, across the Øresund Bridge, is Sweden. It was with a glow in my heart that I boarded the train, not to Malmö, the usual destination of a Swedish day-trip out of Copenhagen, but to Lund, a little further down the line.

My Skandinavian nose tour continues at Nasoteket in the Akademiska Föreningen at Lund University. Yes, amazingly, there are TWO Nasoteks with less than an hour’s journey between them. “Specially deserving” individuals are given the honour of having their nose cast and installed in a wood panelled frame. The Lund University Nasotek was opened in 1987 by Swedish comedian Hasse Alfredson who conceived the idea and whose nose is No.1 of nearly 200.

Here is Hasse with a copy of his nose cast, together with Håkan Westling, vice-Chancellor at the time. 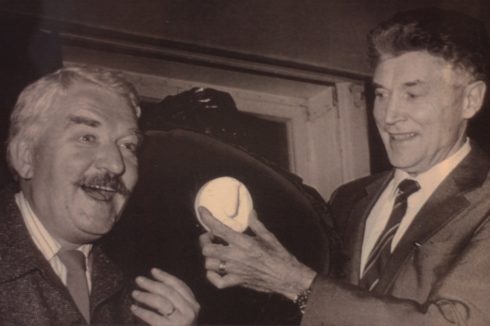 In a happy coincidence, as I wandered through the town after visiting the Nasotek, I stumbled across an exhibition celebrating Hasse’s life. It was put together a little hastily but was informative nonetheless. Born in 1931, Hasse died in September 2017, just 3 months before my visit to Lund.

Hasse Alfredson and Tage Danielsson were a comic duo who established AB Svenska Ord (Swedish Words Ltd.) in 1961. During their 24 years with the company they produced revues, films, recordings and books. The exhibition mentioned in passing that the Hasse & Tage humour was probably not to contemporary taste (well, we can imagine) but that nevertheless they were a national institution. 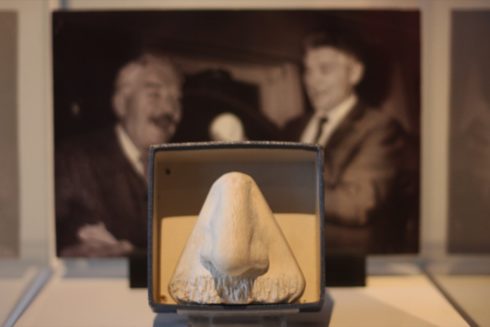 I also discovered that Hasse’s original idea for the Nasotek was much much more ambitious. In 1986 he described imagining the noses fixed to the ceiling of the Small Hall of the University, where they gradually would form a stalactite cave. 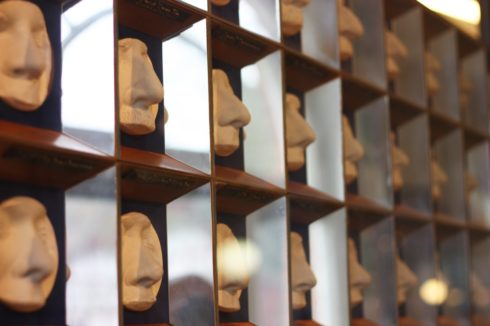 On the one hand the Nasotek is grand in a wonderfully ridiculous way, and on the other, it’s just on the wall in the student café, opposite the kitchen hatch. My own personal preference would be for a more salubrious position within what is actually a very very grand building. 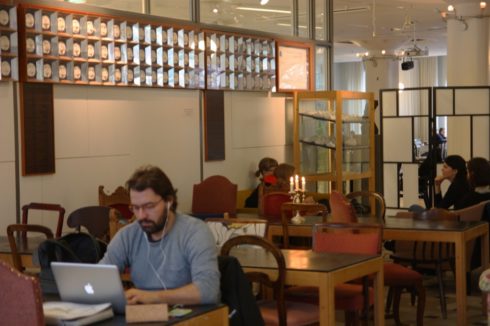 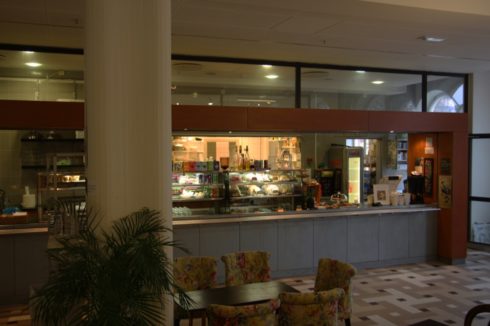 The settings themselves are, however, very well designed. Nose casts are displayed in angled mirrored frames so that you can see the profile of the nose as well as the front. 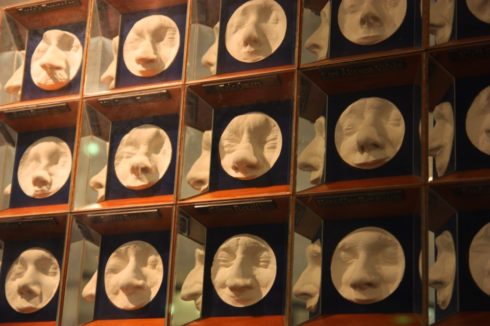 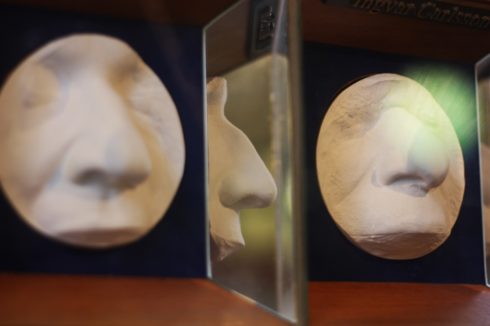 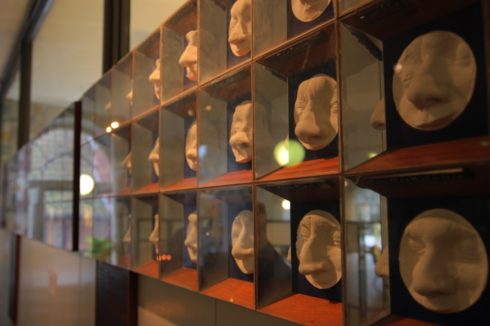 A names of recipients are given in gold print on framed wooden slats. The awards are made by the Academic Society, Nasal Committee. More information (in Swedish) can be found here. 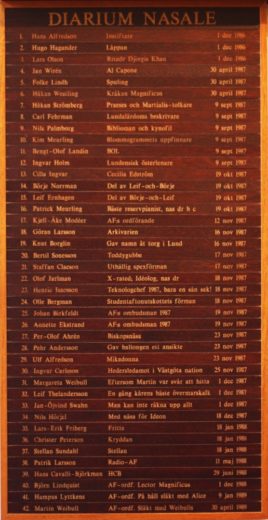 At number 61, I noted the inclusion of the nose of Tycho Brahe, the 16th Century Danish nobleman and renowned astronomer, who lost a part of his nose in a sword dual. Clearly this was not taken from life… so I’m wondering how they made their cast.

Tycho Brahe (1546-1601) was a Danish nobleman known for his accurate and comprehensive astronomical and planetary observations. Well known in his lifetime as an astronomer, astrologer and alchemist, he has been described as ‘the first competent mind in modern astronomy’. His observations were some five times more accurate than the best available at the time.

On 29 December 1566 Tycho lost part of his nose in a sword duel with fellow Danish nobleman (and his third cousin), Manderup Parsberg. Tycho had earlier quarrelled with Parsberg at a wedding dance and the two ended up resolving whichever issue they were quarrelling about, with a duel. Although the two were later to be reconciled, the duel two days later (in the dark) resulted in Tycho losing the bridge of his nose. For the rest of his life, he wore a prosthetic nose, said to be made of silver and gold, kept in place with a paste or glue. In November 2012, Danish and Czech researchers, after chemically analyzing ‘a small bone sample from the nose’ from the body exhumed in 2010, reported the prosthetic was ‘made out of brass’. 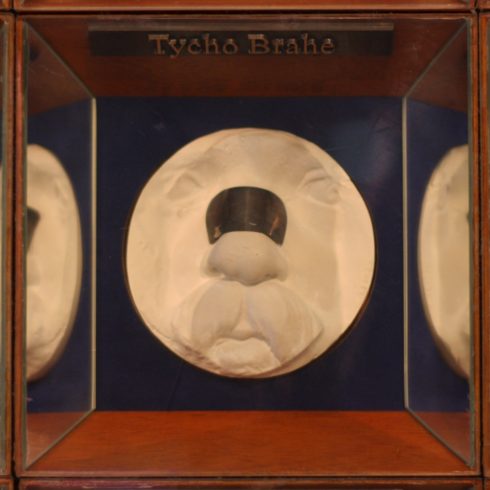 Just underneath the Nasotek is a rather sad looking pine vitrine, with another 3 dozen or so nose casts of the latest people to be ennobled into this select group of honoured individuals. I hope the case is temporary and that the University will commit to the full wood-panelled-angled-mirrored frames for all recipients! 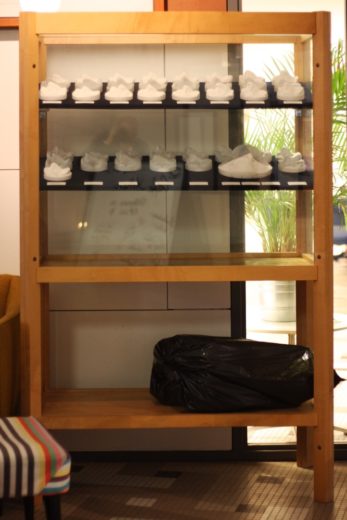 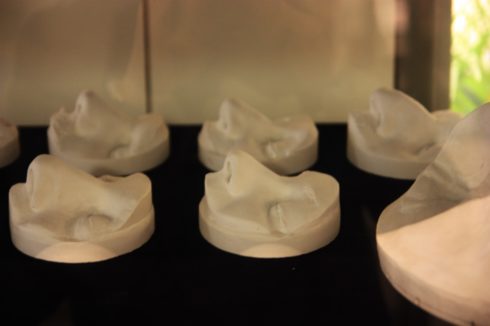