Since my last blog post three weeks ago, the pace at Sura Medura has changed. My fellow artists-in-residence and I have been trying to process the abundance of sensory and cultural experiences that we have had and to think how they might influence or direct our work. This time next week we will have made our public presentations, I will have travelled 8,700 kilometres, and will be drinking my ‘souvenir’ Ceylon tea in my flat in London. The world seems simultaneously so vast and so small to me right now. It’s somehow extraordinary that the waves will still be lapping the sands of Hikkaduwa as I take the Piccadilly line from Heathrow. 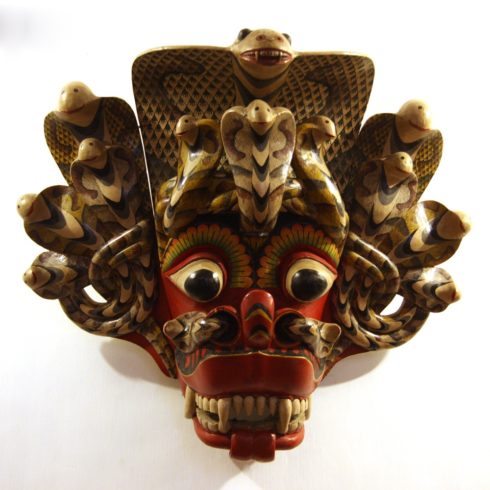 The focus these days has been very much on developing ideas and co-creation, at the same time we have managed to fit in short trips. Just down the road from Hikkaduwa is Ambalangoda, the centre of the mask making industry, and the location of the Ariyapala Mask Museum. Masks are a big thing in Sri Lanka. Historically they have been used in dance and drama but also for ceremonial and even ritualised medicinal purposes. The tradition is kept alive by the tourist industry but occasionally you will see one of the good fortune masks mounted on the side of a house. Some of the cobra demons, from the Raksha Kolama parades and festivals are considered by some as effective deterrents of evil spirits. The one above is Gurulu Rakshaya.

The most prominent demon in the Sanni Yakuma, the ritual exorcism for the sick, is the Kola Sanniya mask. Offerings are made to the demon in a ceremonial performance at the house of the sufferer. 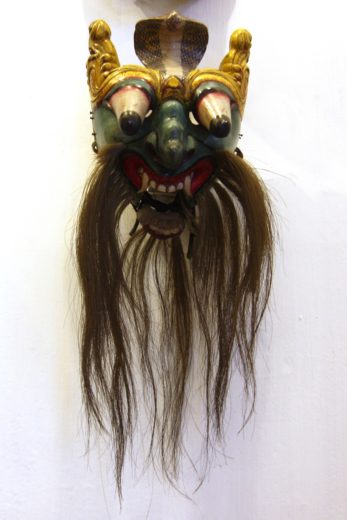 Before the demons arrive, the 12 Pali come to clean the space and prepare the site for the ritual. I was very much taken with their big mouths and exaggerated noses. 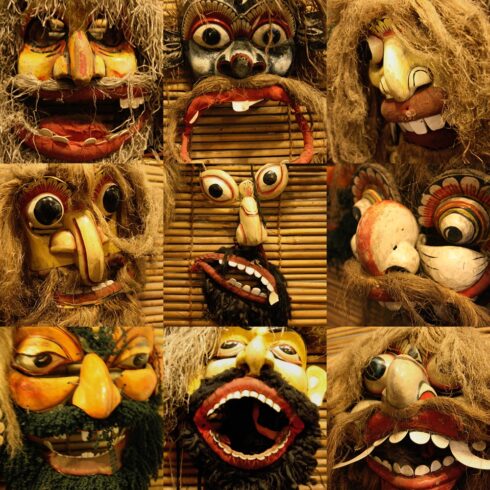 The masks are made from the wood of Cerbera odollam, commonly known as the kaduru tree. The kernels of the tree are highly poisonous, and have been used in both suicide and murder cases across the areas of Asia where it is native. Some people refer to it as ‘the suicide tree’. I don’t know if it is ironic or fitting that the masks carved from this tree have been used to try and cure people. The wood is strong but very lightweight, making it suitable for masks worn in dance. 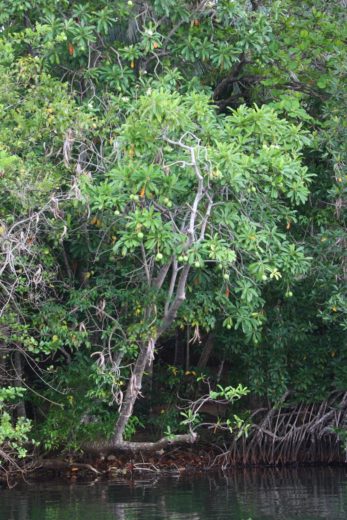 I wanted to try my hand at working a piece of this wood, thinking about adding to my collection of false noses. Although it is easy to cut it doesn’t behave like wood I am used to. It’s more like cutting a very tough vegetable than whittling a piece of wood. Perhaps it’s better to leave it to the experts. 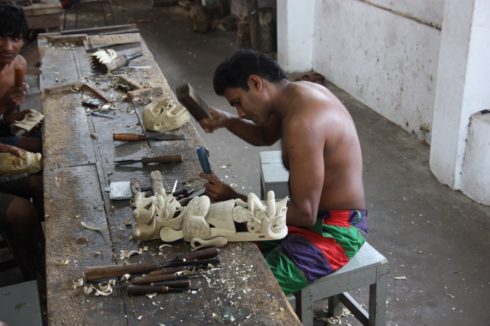 In a dance studio across the road from the Ariyapala Museum we see masks lying around. These well-worn fellows look to have given long service. Their romance was somewhat tempered when the dance mistress explains that they are mostly used in tourist performances. 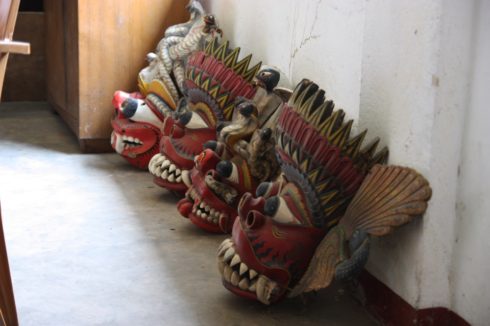 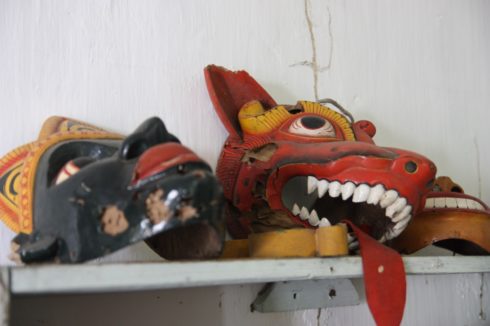 There are masks for sale at every spot a tourist might stop in Sri Lanka. I wanted to bring one home but the ‘tourist selection’ was nothing like as exciting as those I saw at the Mask Museum or in the superlative Martin Wikramasinghe Museum of Folk Culture in Koggala (no photography allowed unfortunately) which had an extraordinary range of beautiful historical masks. So I decided to ask one of the craftsmen to make me one not readily available. I opted for the Kadu Paliya mask, the final of the 12 Pali, who completes the preparation of the space before the demons arrive. He is unique in having a deconstructed face of elements that are separately articulated. He also has a thinly disguised penis nose. 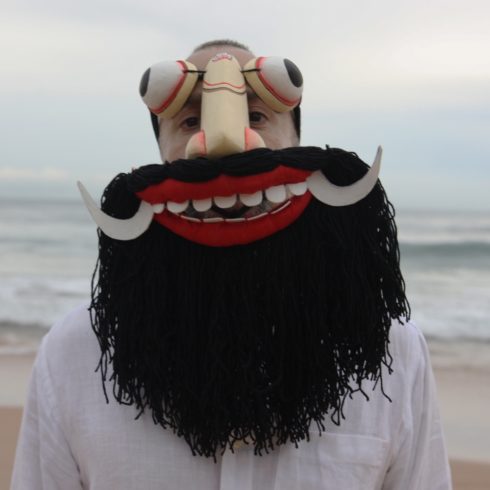 Despite the inevitable creep of plastic and synthetic fibres, there is still a strong industry in Sri Lanka that uses its natural resources in a sustainable way. This is not just as a result of heritage tourism, as in the case of the use of kaduru wood. Coconuts are abundant, and the fibrous material found between the hard internal shell and the outer coat is used to make coir rope, or weaved to make mats.

Close to Hikkaduwa is the village of Donanduwa. Inside a very non-descript pastel yellow warehouse, with no signs to tell you what lies inside, is a coir factory. It was like stepping back in time. 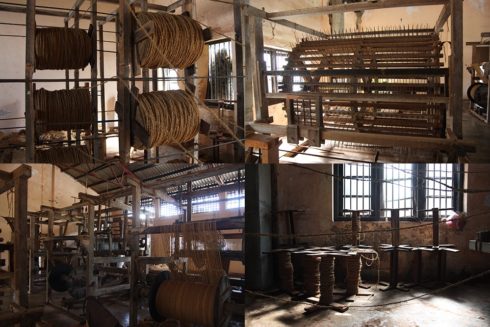 Giant spindles, turn the coir rope ready to be woven. The mat itself is strong and coarse. It is probably more familiar to you than you might at first think possible. Ikea uses coir for many a rug, and often doormats are made from coir. 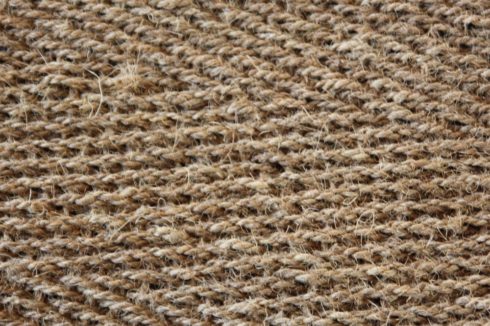 Here two guys are weaving giant lengths that are then sewn together to make the floor covering in cricket practice nets. It is backbreaking work. 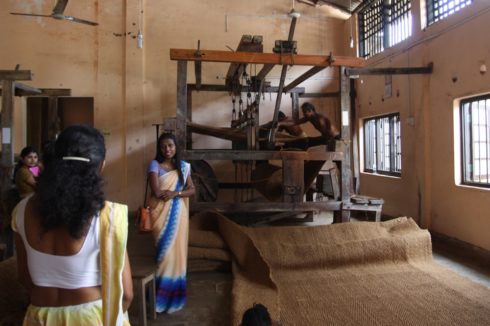 In the corridor giant rolls of coir matting stand proud. 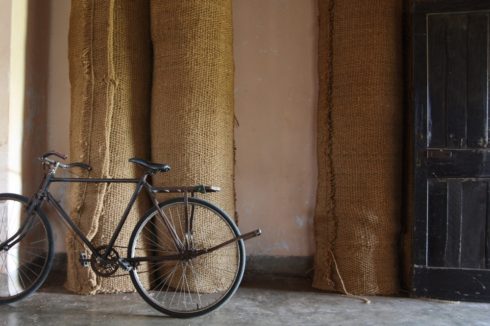 On a boat trip around Donanduwa Lake we saw a number of fenced off areas close to the bank. The fibrous husks of the coconuts are soaked here to swell and soften the fibres, making them easier to process. 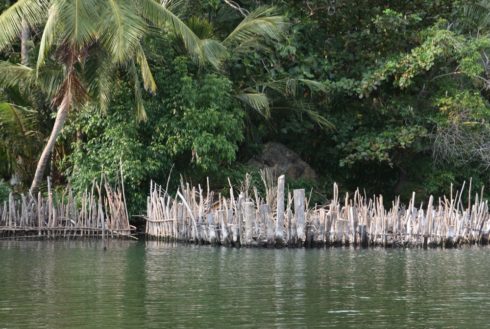 I would love to bring home a cricket pitch sized coir rug but I don’t have a cricket pitch sized home. However, I did make use of an afternoon after we had given artist talks at Colombo University, to visit Pettah Market. A world of stuff is for sale across this sprawling neighbourhood of stalls and shops but I headed for textiles and specifically a street of trimmings. At the behest of Tsai-Chun Huang, the costume designer for a project I will be making in Hull this summer, I was in search of geometric embroidered edging. The choice was overwhelming. 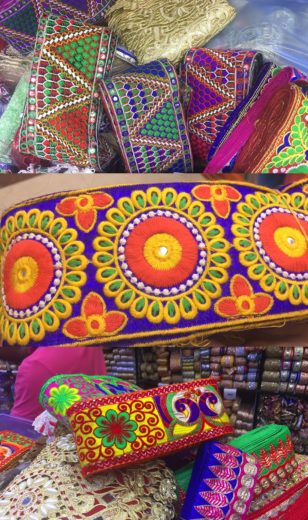 One very weird video call later, in which I had attempted to display thousands of samples in the frame of a smart phone, I left with 33.5 metres of geometric embroidered edging, and barely a dent in the costume budget. 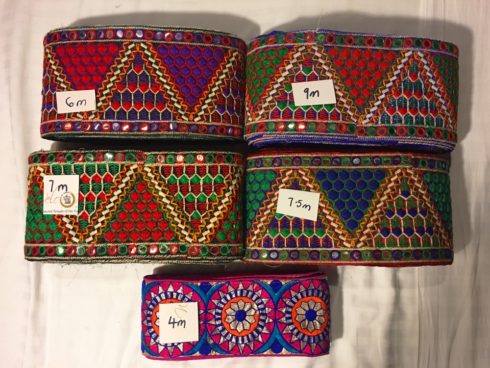 Taking advantage of the fact that Hikkaduwa is close to one of the foremost whale watching sites in Sri Lanka, Ross Whyte and I decided to take the journey along the coast, south, to Mirissa. Rising very early the following morning a tuktuk picked us up and dropped us off at the harbour. Tourists from around the world lined up to board about 8 indistinguishable vessels, almost certainly all having paid a great variability of prices for a similar experience. 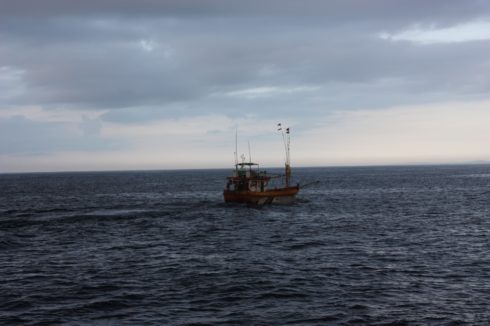 The colours of the morning light on the sea seemed to have an added intensity, as the last fishing boats returned to land with their haul. Then the whale watching boats take over, travelling out for about 45 minutes to a likely spot. And then we wait. 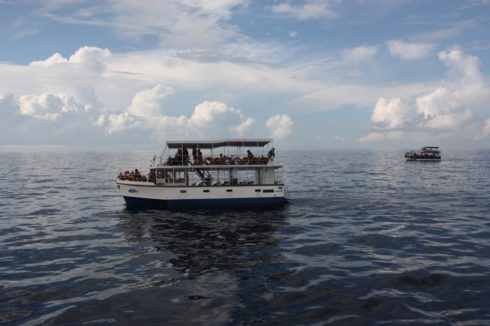 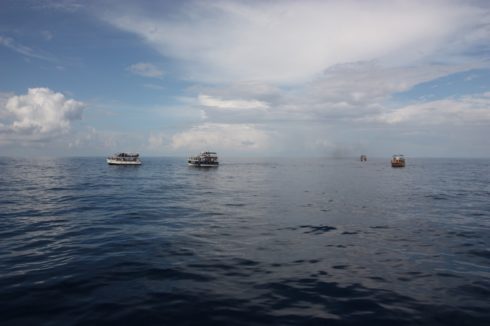 The skipper takes a call on the boat radio and a shout goes up. One of the other boats has spotted a whale. We zigzag across the waves, passengers straining over the side for a glimpse. 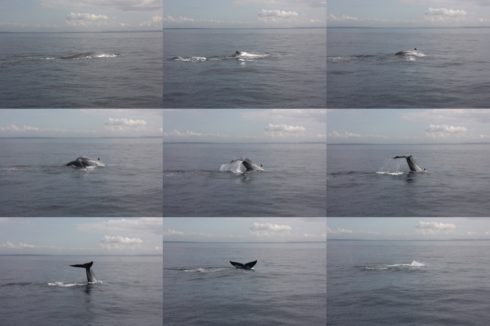 A grey mass floats on the surface of the ocean. It rolls forward and down. As the tail flips the passengers gasp. There is a strange recognition in this. You are looking at something you know, for the first time. The tail flukes are so much part of our collective imagination that when you see them, it has the same effect of looking at a photograph of a loved one taken before you knew them. It is both familiar and strange. 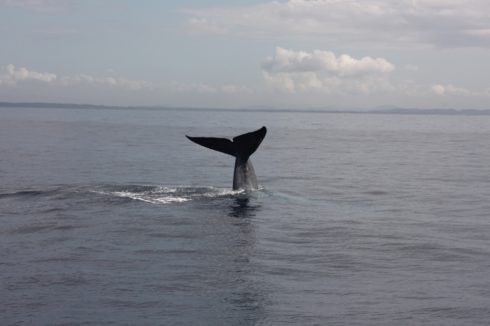 They are extremely majestic and wondrous but I couldn’t help but feel uncomfortable. Much has been written about the polarity of exploitation and conservation of animals in Sri Lanka, especially of elephants. My thinking about the whales was, as fellow artist-in-residence Mary Genis put it, ‘‘at least they have the ocean”. However, chasing the whales across their natural habitat and surrounding them with a collection of tourist boats in order to peek at their tail, felt somehow less honest than if we had been hunting them for their meat. Several years ago working in Lofoten, the archipelago of islands in the very north of Norway, I was invited to dinner by a local colleague and was served whale meat. It tasted like a very meaty tuna. It was delicious. It seems to me there is a lot of hypocrisy about the life of some animals over others. I’m not an advocate of hunting whales for their meat, I think it totally unnecessary, and likewise, it would seem, I am not an advocate of whale watching either.

Back at Sun Beach I have been developing some proposals for artworks that arise out of my research into Ceylon tea. I have also been working with the other artists to create a collaborative piece that we will show this coming Friday. One thing we have been experimenting with is long camera exposures and drawing with light. We are hoping to create a mass-participation night-time light image with the audience. I have very much enjoyed working with my camera in this way and the playfulness of creating images on the beach in the evening. Here is a group portrait of my colleagues: Lewis Sherlock, Zoe Katsilerou, Mary Genis, and Ross Whyte. 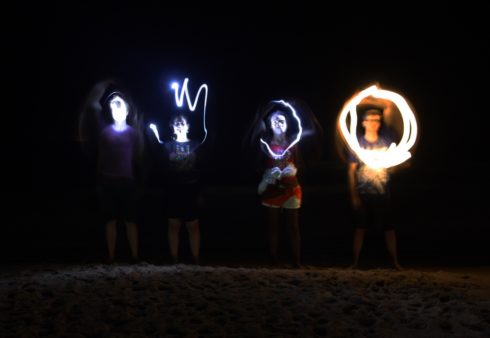 To be honest, I was not particularly looking forward to being thrust together with strangers on a beach on the other side of the world. It seemed too much like a reality television format. But above everything it has been the shared experiences with these guys that I have found most rewarding during my time here in Sri Lanka. We have bonded through discovering things together: the country, its culture, working methods, each other. There have been moments of incredible tenderness, of vulnerability, of solidarity.

Tipsy from a long after dinner cocktail, Zoe, Lewis, and I, run down onto the beach. They strip naked and dance in the sea. It might look like the stage of Sadler’s Wells but it is in fact a 30 second ‘exposure’ on the edge of the Indian Ocean. I like the photograph for itself, but what I really like it for is this moment of magical shared abandon. 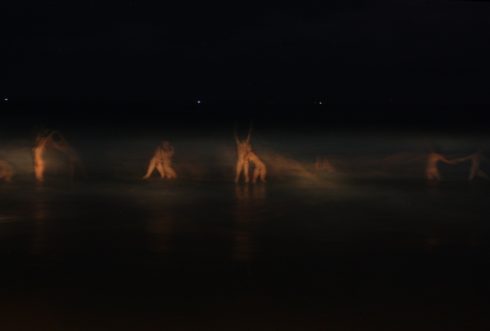