The first stage of judging for Viver a Rua having been completed (sorry, the results are strictly confidential) I took the opportunity of a four-day trip to Lisboa.

Wow. What a fantastic city.

Lisbon is a city of hills and views, of winding ancient alleyways and six lane avenues. With so much mountainous topography the transport system is key. It is a delight. Perfect little trams rush round hairpin bends and stagger up impossibly steep climbs. It was with a real schoolboy glee that I sat on the number 28 to the end of the line and then rode it all the way back again.

There are a series of ‘elevators’ that make one journey up and down continuously. Elevador da Bica travels from the riverside to town and back again, the street’s inhabitants clearing a path with a well-practiced millisecond to spare.

More spectacular but no less practical is Elevador de Santa Justa. If it is possible to be a little bit in love with an elevator then I stake my claim to Elevador de Santa Justa. Built by Gustave Eiffel’s pupil Raul Mésnier, it has the advantage over the Eiffel Tower of being incredibly useful. Not only is it an extraordinary city icon it also gets you through the equivalent of nine stories of city steps in a few seconds. 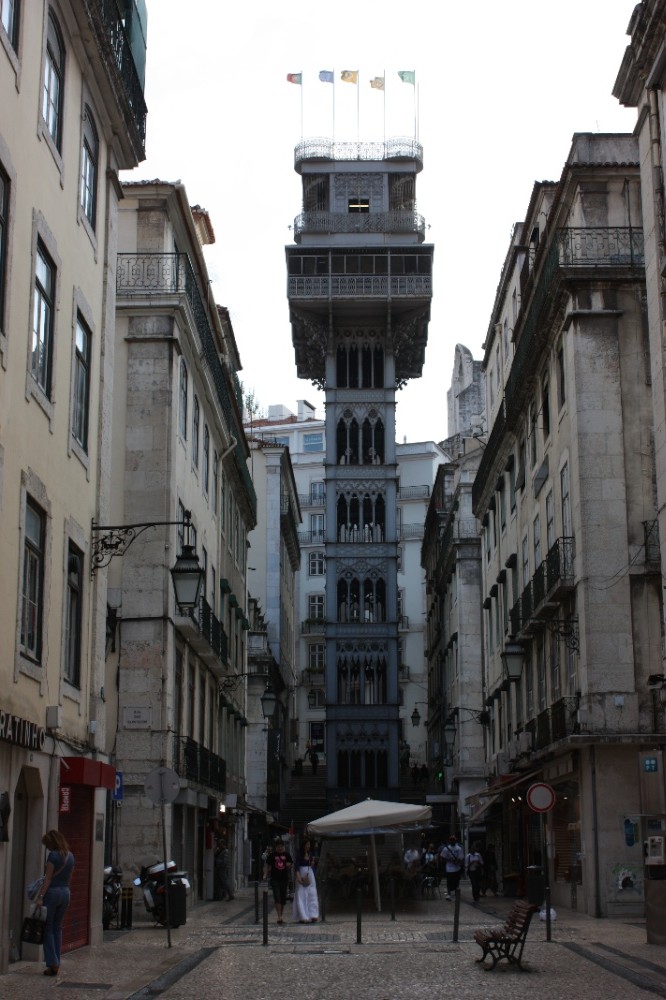 The brilliant thing about these transport wonders is that they are entirely integrated into the metropolitan ticket system. So although they do attract sightseers who come along simply for the ride, they are also part of the working fabric of the city.

From the top of Elevador de Santa Justa the city spreads out below and above, with the Castelo de São Jorge on the horizon.

Up at the battlements of the Castelo, Elevador de Santa Justa beams.

From the eastern side of the castle you can just make out the Ponte Vasco de Gama, Europe’s longest bridge at 17.2 kilometres.

This tantalising glimpse encouraged me to go to Parque das Nações, the ‘new city’ built for the 1998 Expo, but the slightly crappy funicular that erm, just goes along the riverbank, had stopped for the day and I found the whole ‘buildings of the future’ thing a bit soulless after the historic centre.

Buildings that have soul oozing out of their mortar include Torre de Belém, the early 16th Century fort built at the edge of the Tejo to defend Lisbon’s harbour.

And the incredible Mosteiro dos Jerónimos built around the same time to celebrate Vasco da Gama’s ‘discovery’ of India.

As with so much of the old colonial powers of Europe, the marvels we wonder at now were created through the exploitation of trade routes and slaves. This is a history that is not well documented for the visitor. I was staying at Atelier RE.AL, a creative hub in Rua do Poço dos Negros (‘the well of the blacks’) and it took a pointed question to my hosts to discover that this ‘well’ was a pit into which slaves were thrown.

Lisbon is the city of the literature of José Saramago, the Nobel Laureate whose death was announced on the day I arrived and whose body was flown back from his adopted home in Lanzarote to a state sponsored wake, the gravitas of which would only be afforded to popstars or Royalty in the UK.

By a complete coincidence, I found myself having dinner with the staff of RE.AL in the restaurant that was Saramago’s Lisbon regular, and where he held the wedding party of his marriage to the Spanish journalist Pilar del Río.

In this modest Portuguese eatery, the walls cluttered with snaps of their most renowned customer, the staff recalled with fondness and respect this most treasured of Portuguese writers. They were recalling him as a man. There was no discussion of literature. I wonder if they have ever read his books. If you haven’t you should strongly consider it. In The Double the protagonist is sitting in front of the television and spots a man playing a minor role in the soap opera who looks exactly – but exactly – like him; the novel follows the search for his identical other. In The History of the Siege of Lisbon the plot revolves around the consequences of a proof-reader inserting the word ‘not’ into a historical chronicle, changing the way in which the past is read. Saramago’s novels start from a very simple ‘what would happen if…’ scenario. They are brilliantly crafted.

On the day of his funeral, I went down to the City Hall where his body lay in an open casket to pay my own respects but I couldn’t get past the international media or the Portuguese dignitaries.

Not wanting to spend too much time with a corpse, I decided to forgo filing past (perhaps if I had waited long enough I would have found my chance) and carried on exploring the city.

Saramago’s face, pensive and erudite, suddenly covered billboards everywhere. “Obrigado José Saramago” they read. The authorities must have been planning for his death for some time, with a stack of posters at the ready.

Between the death of the nation’s cultural icon and their football team’s assassination of the People’s Republic of Korea 7-0 in South Africa’s World Cup, the city had plenty to talk about in the bars and cafes. “Saramago” and “Ronaldo” were uttered everywhere with unavoidable pride.

Saving the best until last.

I know it might sound disingenuous to say that the highlight of my trip to this incredible European capital was a custard tart but I promise you that this was not just any custard tart, this was a pastéis de nata, made to a secret recipe in the Antiga Confeitaria de Belém since 1837. I admit that the circumstances of my consumption were in themselves a relief, undoubtedly heightening the pleasure. Having walked half way across the city, taken a wrong train, and having had an encounter with a ticket inspector, I was suffering from a sugar low and, at the very least, needed a sit down. My expectations were also not that high. I don’t really like custard tarts. The thing was plonked, rather than placed, in front of me. But the second my lower lip brushed the thin layers of delicate crisp pastry and my upper lip the soft yellow custard cream, everything in the world suddenly seemed alright. I was completely absorbed by what was happening in my mouth.

This confeitaria can shift up to 30,000 of these creamy concoctions on a single day in the weekend. Their seemingly never-ending series of vaulted rooms can seat up to 2,000 people at a time. There are 40 women employed whose sole job it is just to roll out the pastry cases. Although pastéis de nata are sold all over Portgual, these pastéis de Belém are famous throughout the world with good reason.

They are not overly sweet. The custard is just set. The combination of flavours is comfortingly familiar and yet deliciously unique. The real pleasure – they were 15 minutes out of the oven warm.

Perfect with my bica it was a culinary moment of perfection. I immediately ordered a second.