Having finished teaching the workshop in Taipei, and with the help of my hosts, I arranged a week or so of travel to see some of Taiwan beyond the capital.

Hualien is the biggest city on the east coast and the base to explore the famous Taroko National Park and the extraordinary Taroko Gorge, a 20 km stretch of marble walls that soar above the Liwu River. It is awe-inspiring scenery that feels somewhat like stepping into at Chinese scroll painting. Suddenly those brush marks that I have seen in museums and coffee table books began to make sense.

The river flow has licked the most amazing forms into the marble canyon walls, revealing the mottlings and streaks in such a way that at times it is almost as if the rock becomes the water that formed its shape.

Indeed there is poetry everywhere, even in the rest stop cafes.

There are also reminders that the road you travel on, the Highway, was hard fought. In fact the history of the whole park is one fraught with strife. It is named after the Truku aboriginal tribe who called the land their home before being ‘resettled’ when the area became of military importance during the Japanese occupation. When ROC was established, the building of the Highway was seen as being an important aspect of national security. It was also a way of occupying 6,000 ex-servicemen every day for 3 and a half years. Photographs of the perilous conditions they faced are mounted on boards at key viewing points. This all happened in living memory. The Highway was completed in 1960.

The Eternal Spring Shrine was built to commemorate the 226 workers who died.

There are also glimpses of the only pathways that existed before the building of the Highway: steep and narrow, casually paved.

After Hualien I travelled to Tainan in the southwest. Former capital and Taiwan’s fourth largest city, Tainan is famous for its food and its temples. There are hundreds of outlets for both.

Some spectacular, some tired, almost all of Tainan’s temples that I visited seem ‘domestic’, insomuch as they form a part of the daily life of citizens. Although there was no objection to my cultural tourism at all, I was almost always the only person snapping pics. Most people had come to pray or to seek advice from the gods.

Religion is present everywhere in Tainan. There are small shrines in almost all shops and the burning of offerings (usually paper standing in for money) is common on pavements throughout the city. From what I understand (which after all isn’t much!) there are three main religious traditions: Confucianism, Taoism and Buddhism (there are also Christian churches throughout the country). Confucianism, which was abandoned in mainland China in 1949, thrives in Taiwan. What is interesting about it is that there aren’t any gods. Confucian temples are more like ancient universities for the study of moral codes, rather than places you pray. There are no images of gods. Instead you worship the word, in the form of inscribed tablets.

Old and new sit side by side very happily in Tainan and this symbiosis can be seen especially evident in Shennong Street, where hip cafes and galleries adjoin odd little pre-digital work spaces where people beaver away at, well at what I’m not quite sure.

One of the surprise highlights in Tainan was Angpin Tree House, which is located port side, some distance from the centre of the city. One hundred year old banyan trees have overrun the former storehouses of Tait & Co., a former British trading outfit. Instead of demolishing this ‘redundant’ architecture, the city authorities have built a series of walkways over and around, so that you can see the trees and the buildings merge into this one organism. It is very simply done but wonderfully so. This is one of the best examples of heritage preservation that I have seen.

Back in the centre of town I stopped off for a midnight foot massage at one of the famous 24 hour stores. To describe it as ‘agony’ wouldn’t be quite right but it was pretty hard work. It was worth it. I felt the weight slip away and was hopping about light footed for the next couple of days. This ‘massage’ is really reflexology, the idea being that you can tell the health of the internal organs by various pressure points on the feet. My therapist didn’t seem to show any alarm.

The food continues to be an adventure. When I have been in Japan I have been caught up in the food culture and very much enjoyed and participated in the national discussions about where to get the best ramen noodles or pork cutlet. I could not have imagined there would be another county so concerned with food. Well Taiwan is. People discuss food all the time and eating is a not just a necessity but a pastime.

During the days of the workshop in Taipei, my hosts took me to the famous Michelin starred Din Tai Fung. After a starter of bitter melon to clean the palate, the dumplings arrived.

These perfect Pork Xiao Long Bao (small steamed dumpling) have 18 folds, the number which, after numerous tests, have proved to be the most efficacious for dumplings of this size.

My personal favourite, the Angled Loofah and Shrimp Xiao Long Bao, where the hot silky cucumbers mix deliciously with the prawn. You can just see the green and orange shine through the dumpling here.

I can’t remember if these are the Steamed Fish or Chicken Xiao Long Bao but anyway they all slipped down a treat.

This vegetable accompaniment may not look all that promising but was in fact a highlight. Stir-fry spinach with Bean Curd Sheet, cooked in Xiaoshing, a fortified wine which tastes a bit like Port or Madeira.

And to finish a dessert of crispy cake with taro or black sesame. I could have eaten it all again immediately.

The various night markets also continue to be a source of amazing flavours. This white sausage looking thing is not in fact meat but rice. It’s used as the ‘bun’ base for a kind of hot dog. It is split open, stuffed with vegetables, sauce and ground peanuts before being wrapped in clever polythene and paper package that you twist to push out the next bite. It was, once again, delicious. The crispiness of the outside of the rice bun, and the chewiness of the inside, absorbs all the flavours for a fantastic snack.

Fried squid is chopped up and mixed with a sauce of your choice. 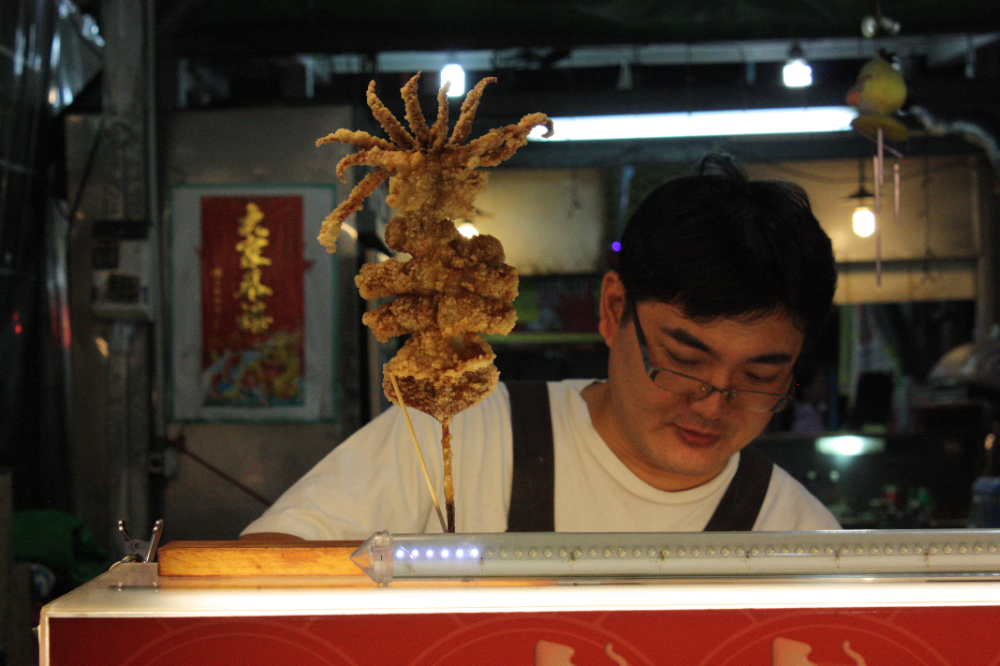 And erm, duck parts. I was reaching my culinary limit here. Piles of duck heads, necks, tongues, offal and so on, sit next to cakes made of pigs blood. You select the bits you want and the chefs fry, steam, season and package in a human cookery chain.

This is duck tongue. As a kid I loved ‘beef tongue’. It was always a real treat. But well, there isn’t so much meat on a duck tongue and it’s difficult to slice nicely. You also have to contend with the jaw bone (or whatever that bit at the back is).

A bit of a soft relief from the hardcore were these fried sweet potatoes and yams. Yummy.

This is a typical Taiwanese desert of shaved ice with various sweet bean and tofu accompaniments.

Steamed buns with pork or beef mince inside. Very comforting.

These fried little fish with peanuts were very tasty.

In Tainan it seemed like the entire city converged on the unbelievably huge Friday evening night market. It was heaving with people.

This clam omelette was very good indeed, although I wasn’t entirely sure about the sweet red sauce that they pour on at the end. In general Taiwan likes things sweet. In Tainan especially, sugar has historically been seen as a sign of wealth.

And this woman behind her glass screen is stuffing a chicken wing with rice (yes, I know it looks like a leg but that’s because it’s on a stick). The rice absorbs the flavours and fat from the meat making it all succulent, rich and tasty, like the best English Sunday roast.

This man is making ‘animal cakes’ which are something between a drop scone and a pancake. When I mentioned to my Taiwanese hosts that I had tasted these they asked which shapes I had tried. When I replied that they were all the same mixture, they looked aghast. There is a tradition from childhood about which you preferred and then what you would eat first, the head or the tail. Actually the different shapes do taste different because thinner bits of a shape are crispier and fatter bits are more doughy.

And if none of that takes your fancy then how about this plate? In Tainan you can go into a ‘fruit cafe’, where they chop and serve you a plate of delicious fresh fruit. I’d love that in London.

And the final word goes to this glass of kumquat and lime juice with soda water. It took me sometime to find all the flavours. It was a remarkably complex drink, touching all the different tastes on the tongue: sweet, sour, bitter, salt. Extremely refreshing …and once again, delicious.

I have loved these three weeks in Taiwan and hope there will be an opportunity to come back. It is already under discussion. Next stop: Hong Kong.