Over the last months I have been collaborating with artists and designers from across Greater Manchester on the creation of Cap & Dove, a tiny travelling arts centre, housing a one-window museum, theatre, and shop. Cap & Dove is a Peterloo legacy project, celebrating protest, liberty, and equality. 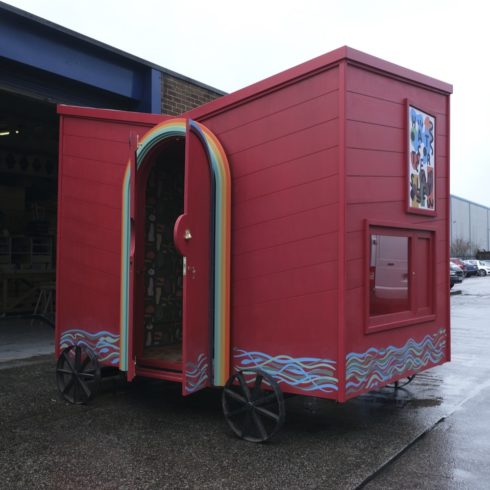 The structure and its decorations tell stories about the ten Greater Manchester districts: Bolton, Bury, Oldham, Rochdale, Stockport, Tameside, Trafford, Wigan, and the cities of Manchester and Salford. This blog shares some of those stories.

The Peterloo Massacre took place at St Peter’s Field in Manchester on 16th August 1819. Cavalry charged into a crowd of 60,000-80,000 who had gathered to demand reform and parliamentary representation.

STRUCTURE
At Peterloo the ‘hustings’ (from the Old Norse hús, meaning house, and thing, meaning assembly or parliament) were two carts combined together with planks across the top of them. Cap & Dove starts from this basic structure of a cart and planks.

After Peterloo, and as reported in the Public Leger & Daily Advertiser (2 Sept. 1819) when the orator Henry Hunt was released from prison and visiting the north-west, he was pulled out of Bolton by a group of ‘Female Reformers’. This image of the people pulling their symbol of liberty is important to Cap & Dove.

There is also a modern reference, as ‘election carts’ were a popular way of engaging with citizens during parliamentary campaigns in the first half of the 20th Century. The photographer Humphrey Spender documented these in Bolton.

I have been working with Tim Denton, whose workshop is based in Trafford, on the design and build of Cap & Dove. It’s been a really rewarding process.

THE ‘CAP’ AND THE ‘DOVE’
The title comes from the ‘cap of liberty’ and the ‘dove of peace’, two symbols of protest. (It also sounds a bit like a pub, which I like.) The cap of liberty was identified with the pileus, the felted cap of emancipated slaves in ancient Rome. It was a symbol of resistance in the French Revolution and adopted by the radical movements of the north-west of England in the late 18th and early 19th Centuries. The cap of liberty was widely portrayed on commemorative Peterloo cups, and can be seen in the collections of Bolton and Oldham. Rochdale have a ‘cap of liberty’ finial in their collection, the ornament found at the top of a banner pole, found on St Peter’s Field after the massacre. 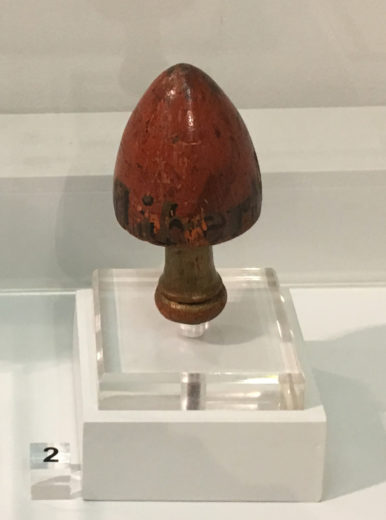 Caps (and hats) have a further resonance in the districts of Greater Manchester, especially in Denton (Tameside) and Stockport, as they have a long tradition of hat making. (Stockport has Hat Works, a museum dedicated to the hatting industry.) The dove has been a symbol of reconciliation since antiquity.

The subtitle of Cap & Dove is drawn from the name of the highly popular, but short-lived, Stockport Union for the Promotion of Human Happiness. 1 in 10 people took part in classes and gatherings. Formed in October 1818, it was repressed after Peterloo.

A text art piece, inspired by the Text Art Archive in Bury, has been laser etched into the structure, using the original 19th Century font that was used in Stockport Union’s ‘Declaration of the Object and Principles’. 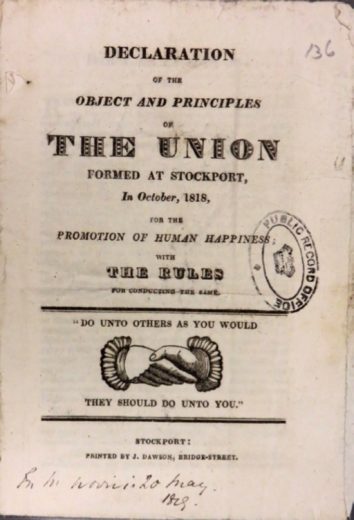 COLOUR PALETTE
We are working with a Regency period colour palette inspired by the colours in the costings book, used to send samples and prices from Peel, Yates & Co., Church Bank printworks to Peel’s Manchester warehouse (1813 to 1822) and now in the Bolton archives. 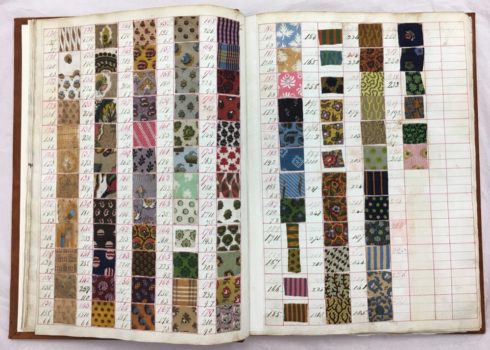 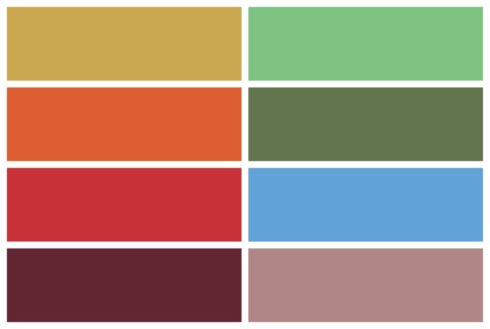 RIVER
Three sides of Cap & Dove are bordered by a river motif. Rivers have been of vital importance to the north-west, not just as a source of drinking water and crop irrigation but also in the fabrication process and to run the machinery which gave rise to the industrial revolution. The rivers of Greater Manchester cross the boundaries between districts.

The design is based on a 14th Century tapestry depicting the New Jerusalem (Musée de la Tapisserie, Château d’Angers). Controversial preacher John Wroe declared that Ashton under Lyne (in what has become Tameside) was, in fact, a Holy City and the New Jerusalem, persuading the wealthy of the town to build a replica of Solomon’s Temple in 1825. 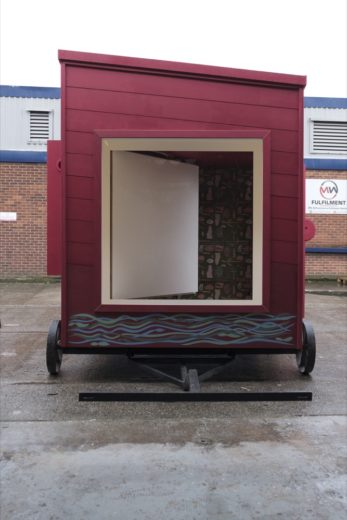 RAINBOW
The double doors of Cap & Dove are framed by a rainbow archway (which in Tim’s clever design also acts as a gutter, taking the water from the roof to the ground). The rainbow (in Regency colours) represents the important role Manchester has played in the fight for LGBTQI rights, especially in relation to the repeal of Section 28. All of the districts of Greater Manchester have established their own Pride March. 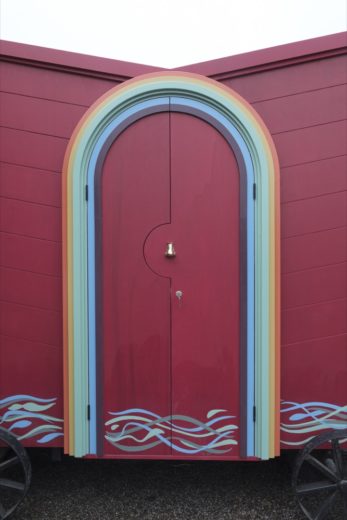 SAM BAMFORD’S NOSE
The door handle is a solid brass nose, modelled on the bronze relief set in the memorial obelisk to Sam Bamford in Middleton Cemetery. Samuel Bamford (1788-1872) was an English radical and writer who led a group from Middleton (now part of Rochdale metropolitan borough) to St Peter’s Field where they witnessed the Peterloo Massacre. Bamford was an advocate of public defiance and the rights of the working classes. Now you can rub noses with him (as Cap & Dove producer Debbie Chan is doing here). 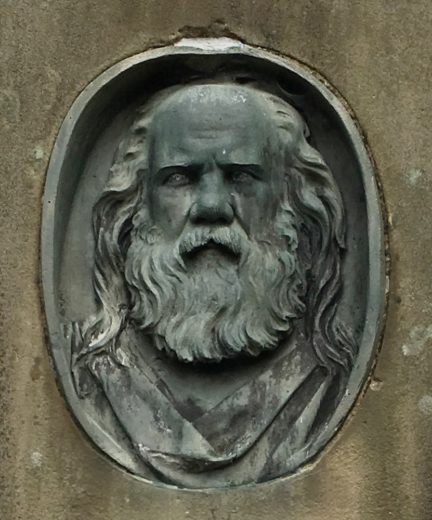 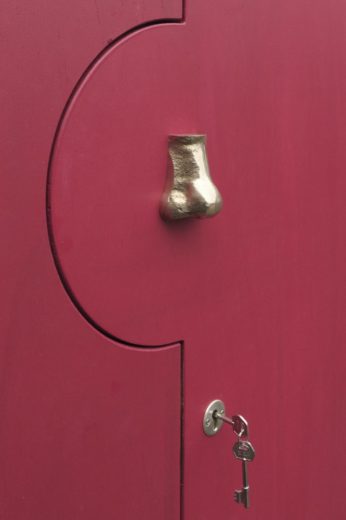 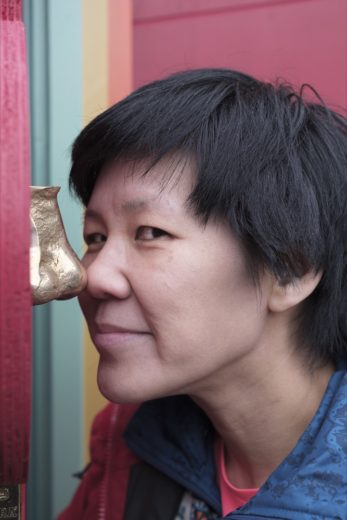 POSTERS
Caroline Dowsett has created a series of posters for Cap & Dove as it tours. They are inspired by the simple messages on early 20th Century election posters in Wigan and Leigh Archives. 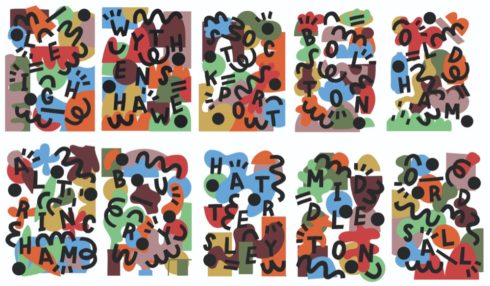 WALLPAPER
The inside of Cap & Dove is decorated with a wallpaper illustrated by Maisy Summer. Greater Manchester has been an important place for the production of wallpaper. The giant Hunter Penrose industrial process camera used in the manufacture of wallpaper at Rome Mill in Oldham (and now used to great effect by Saddleworth photographer Ian Beesley) is part of the Odham collection. Wallpaper is also a collection of international significance in the Whitworth, Manchester. 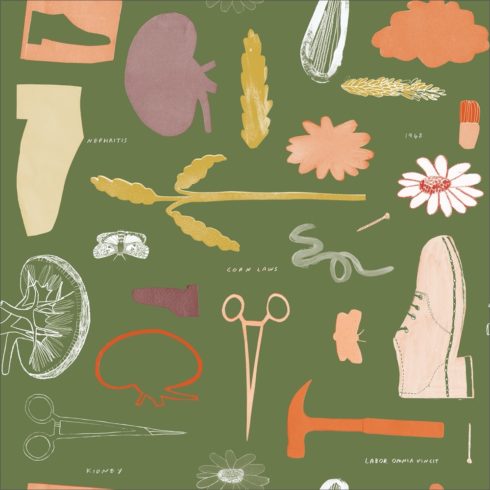 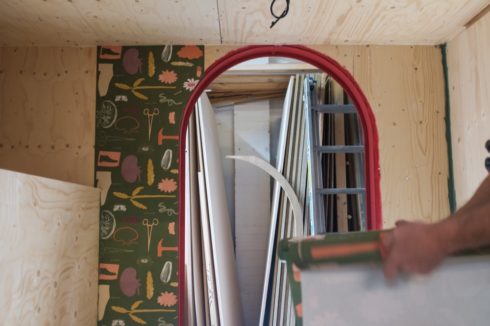 Corn Marigolds (Chrysanthemum segetum). Marigolds as a symbol of resistance. Ralph de Ashton, 15th Century land owner levied fines on tenants who let weeds grow (as opposed to planting crops). He was said to have put repeat offenders in a spiked barrel and rolled them down a hill. An effigy of the ‘Black Knight’ is still paraded through Ashton in Tameside on Easter Monday. The Ashton family motto was Labor omnia vincit (work conquers all) which, paradoxically, was taken on by unions and workers movements. The idea that corn marigolds are weeds has to be rethought as we need to rest land that has been over-farmed. Corn marigolds also attract bees, butterflies and moths. Young shoots are eaten as a vegetable, especially in Asia.

Wheat. The Corn Laws (corn in the 19th Century denoted all cereal grains, such as wheat and barley) were import duties which had the effect of keeping food prices high for working people. The Corn Laws were repealed by Bury hero, prime minister Robert Peel, in 1846. Issues of free trade and protectionism are at the heart of our debates about Brexit.

Clogs. Industrial workers needed strong, inexpensive footware, and clogs were common across the north-west. A key text in understanding Peterloo is the transcript of the inquest of John Lees in Oldham, who died from his wounds. Under cross-examination by James Harmer (a solicitor who also represented Sam Bamford), Robert Hall, a constable (and likely a spy for the magistrates) refused to admit to seeing the yeomanry or hussars cutting people. Harmer however solicits from Hall an admission of the way the field is strewn with detritus as people fled for their lives. Hall describes seeing “…some shoes and clogs” left on St Peter’s Field.

An image of the human kidney. The first ever NHS patient, Sylvia Diggory had acute Nephritis (from the Greek nephros meaning kidney). The NHS was born was 5 July 1948. It was inaugurated when Aneurin Bevan visited Park hospital in Davyhulme, Trafford. It is now Trafford General Hospital and is known as “the birthplace of the NHS” as the first NHS hospital. Bevan met the NHS’s first patient, 13-year-old Sylvia Diggory, who later recalled: “Mr Bevan asked me if I understood the significance of the occasion and told me that it was a milestone in history – the most civilised step any country had ever taken. I had earwigged at adults’ conversations and I knew this was a great change that was coming about and that most people could hardly believe this was happening.” 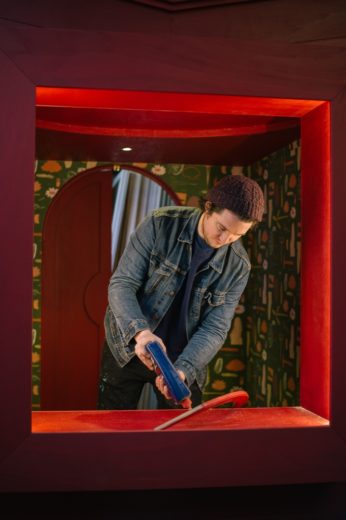 FLOOR
The floor of Cap & Dove was designed and built by Joe Hartley from Standard Practice with workshop participants from across Greater Manchester. They used the Pilkington Tile Archive based in Salford as their inspiration, and experimented with different forms of tile production, working with discarded wood. A lot of what they created is not included in the eventual design (for example compressing pine needles to create a coarse moulding material). Their floor is a mosaic pattern reminiscent of the extravagant exhibition stands that Pilkington tiles would commission to advertise their wares. (One such stand, for the Franco-British Exhibition at Wembley in 1908, was designed by the architect Edgar Wood. Wood was based in Middleton (now in Rochdale borough) and has left some fabulous examples of his own Arts & Crafts style in the town.) Some of the tiles are dyed with red cabbage and red onion skins (in the Regency colour palette) and incorporates sections of recycled Christmas trees from the Tameside borough celebrations. 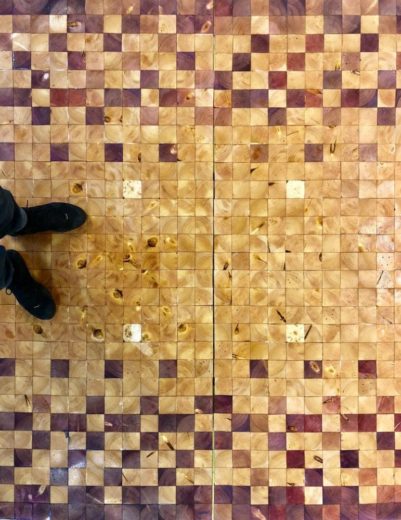 CURTAIN
Cap & Dove has two curtains: one at the front of the theatre proscenium, and another, floor to ceiling, inside the structure to create a small cyclorama. First year undergraduate students on the Textile and Surface Design course at Bolton University were given the opportunity to present a design. The response was amazing; 25 students submitted multiple approaches.

The selected design is by Zaynah Arif, who recreated some of the floral illustrations from the Peel costings book and rearranged them in a kaleidoscope array. The effect is both historical and contemporary, referencing a span of two-hundred years of textile making in Bolton. 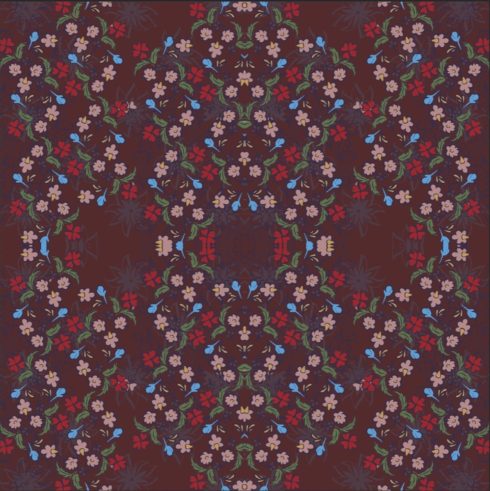 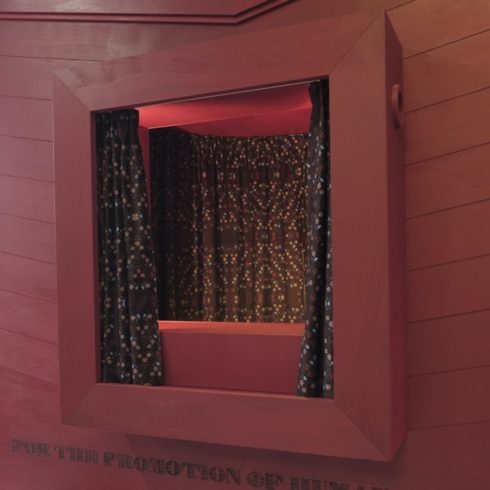 These are the main narrative elements of the design of Cap & Dove. As it travels around Greater Manchester it will be populated with people and objects. The one-window museum is an opportunity to showcase artworks and museum objects from the borough archives. The tiny theatre will host the Cap & Dove ensemble of contemporary performance, local talent, as well as campaigning organisations. The shop will carry dedicated merchandise as well as items made by artists and craftspeople from across Greater Manchester. 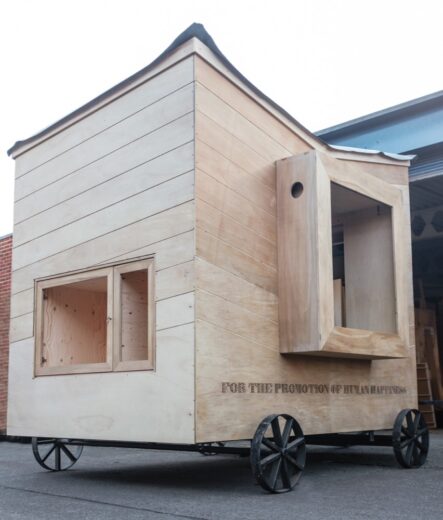